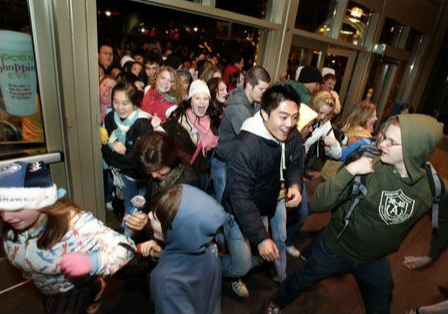 Like many Americans I’ve struggled to put the election of 2016 in proper perspective the last few weeks, only to arrive at an unexpected conclusion: Trump may be America’s first Black Friday President.

In choosing The Donald over The Hil, could it be that Middle American voters decided to conjure their  more perverse natures—throwing a wrench in the works of the good-for-us Obama agenda? Did white suburban and rural voters “break” for Trump at the polls the same way they break for the big-box stores on Black Friday for a day of gratuitous spending and an irresponsible outlay of social and political capital?

In many ways Trump is Black Friday personified: politically incorrect, larger than life, uniquely American. Like Black Friday itself the Trump vote represents a rejection of “what’s good for us” (humility, modesty, the willingness to get along) for a whole-hearted embrace of our darker natures, our needy, national Id restless and ready. Few things beyond the requisite workday are strong enough to get us out of bed at 5 a.m anymore. And yet the pleasure principle inherent in buying things we often cannot afford and do not need finds us setting our alarms for that ungodly hour, willfully trumping the angels of our better natures.

“It’s a fine line between Saturday night and Sunday morning,” my father, a Midwestern farmer, used to say. What he meant was that Americans are prone to both the sacred and the secular, and often in the same weekend. Buried not so deep in our anti-authoritarian, highly contrarian natures is a desire to do the right thing, and also, occasionally and perversely, to do the “wrong” thing with good intentions.

What other culture would chase the uncommodifiable goodnesses of Thanksgiving with the unmitigated excesses of Black Friday? Sometime late in the afternoon of Thanksgiving day, the Id begins to claw at us: We’re tired of behaving, weary of being such socially and politically correct beings. Maybe we’re feeling Cabin-Fevered by such close exposure to extended relatives. A mindless action flic at the multiplex begins to sound like a pretty appealing escape, or a tall glass of merlot or a beer or two or three. Some smash-mouth football on the screen, some salacious Trump headlines to digest on our news feed, maybe even a late Turkey Day shopping spree promise to cure what ails us.

As much or more than Thanksgiving, Black Friday reveals the true breadth of the American character. Its rise suggests, pollsters and pundits be damned, that we are open to more “bad” in our lives—in the way James Brown was bad, the way we’re told America could be “bad” again on the world stage under Trump. The way “bad” means don’t tread on me—we do what we want, when we want, how we want, whether or not the overlords and wonks think it’s good for us.

Love it or hate it, Black Friday is the one day of year, other than Election Day, when Joe Consumer (read: Joe Voter; read: Us) is allowed to think he’s driving the ship for a day —a day when he’s seemingly afforded Alpha status again, back in charge of his pocketbook and his nation’s fates. On Black Friday Joe takes the grinding wheel of capitalism and steers it to his advantage, steamrolling the forces he is otherwise powerless to control the other 364 days a year. He’s able to get his. He’s able to come home sated and victorious, and with something new, beguiling, and little bit dangerous to play with.

Zachary Michael Jack teaches in the Leadership Studies and Liberal Studies graduate programs at North Central College in Naperville, Illinois. He is the author of many books on American politics, including most recently March of the Suffragettes: Rosalie Gardiner Jones and the March for Voting Rights.

“Conservatism” and the New EPA