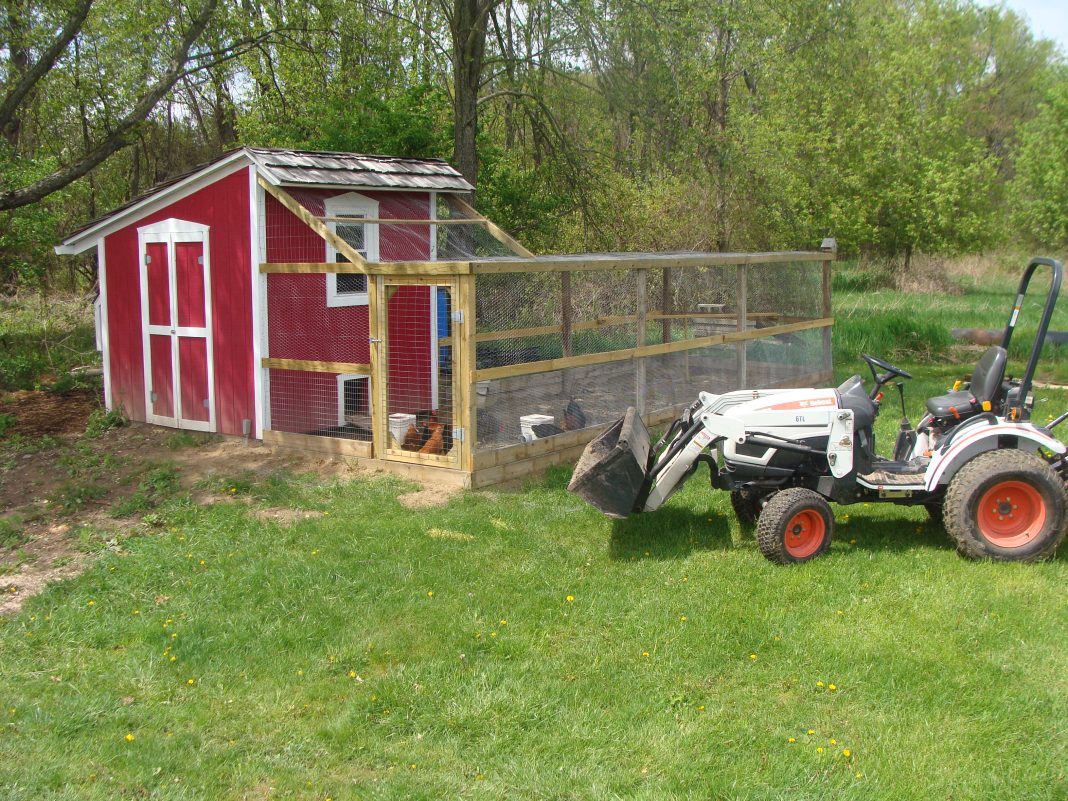 Photo: “So much depends upon a white tractor glazed in pollen beside the red chickens”

“Nice jorts,” my daughter says to me.

These are Wrangler’s. Inexpensive, durable, many-pocketed. They’ve even got the loop on the left side that a professional house painter might make use of. I like my Wrangler’s. In this bi-legged house of many mansions my standard equipment fits well: cheap cheater specs in case I have to loosen a bolt I can’t quite focus on, a couple different pocket knives, a pair of channel locks, and a pouch of Beech Nut, though I take a plug of chew maybe twice a year, and only when the weather turns cold. There’s room in these “jorts” for what professional shoppers and social-media starlets might call “accessories,” though I doubt they mean by that vague term a measuring tape and a carpenter’s pencil. You may be sure that no mobile device will ever be placed in any of these pockets. This dumb ass will never be guilty of butt-dialing anyone.

“I’m not trying to pick up women, you know.”

“It’s still a fashion faux pas,” she informs me.

“Fashion isn’t part of my universe.”

I point to my head. “You see this hair? I won’t cut it till I’m shown the dog house. You see that pick-up truck I drive? Jorts suit me fine.”

I should tell her the joke about the dog with four prostheses: he had faux pas. Instead I head out the door. I’ve got to tweak the latch on door to the chicken run. The run is my most recent rush-job project here at Dumb-Ass Acres. The hen house had been completed for some time when my pal Garry got a new job and told me that his birds would be needing a new home.

“Fine. But I have to get the run built. Our neighborhood”—and here I used the word as Aldo Leopold did—“is a sanctuary city for predators.”

That was back in the spring. I was doubtful of my capacity to pull this off in the middle of an academic term when I was teaching an overload, trying to get yet another teen-aged free-loader through his driver’s exam, and fighting a basement flooded amid a futile remodeling campaign. But Heaven favored me with three successive clement weekends that allowed me to build an eight-by-twenty-four-foot run, approximately six feet high except where it angles up above the window.

That was the part that gave me pause and kept me from getting the run built in the first place. It wasn’t trenching around the run and sinking galvanized hardware wire to fend off tunneling predators. That’s not a conceptual problem, just a labor problem. No. The part that gave me pause was the window. Notwithstanding the advice of many people—“staple some hardware wire over it; that would be the easiest thing to do”—I didn’t want to destroy the look of a good window, nicely-trimmed-out, by doing “the easiest thing to do.” So I spent long hours staring at the hen house, trying to visualize a run that would preserve my view of that window.

But then the mother of invention stepped in—that would be Garry’s new job and his soon-to-be-orphaned hens—and at last I had my plan: I would enclose the window in the run itself. This would give me the added benefit of at least a little space I could move about upright in.

But there was another complication. Garry also had to sell his tractor, a sexy little Bobcat with a bucket, forks, a tiller, a blade, and only 300 hours on it. And he would have to give me a deal, because I happened to know exactly what kind of deal he got when he bought it. I knew because he made the mistake of bragging to me about it.

In coveting this tractor I was blatantly breaking one of the ten commandments, but sin was the least of my worries. In order to seize and enjoy the object of my lust I would have to overcome another obstacle. I would have to sell my 1986 Massey Ferguson, 46 hp with 1,800 hours on it. But like any man overcome by covetousness I was hell-bent on doing this. I was mad to have his tractor with the hydrostatic tranny, which, I told myself in one of those feats of moral self-comfort, would be easier and safer for my lazy deadbeat sons to drive.

Lucky for me God provided the best kind of buyer there is: a sentimental buyer, a guy who wanted a Massey because his dad had one. So I got a good price for mine—nine-hundred more than I paid for the tractor plus the mower, which mower I kept (so that’s another $400 at least in equity, if not usable equipment)—and thus there remained but one problem: how to get the Bobcat from Liberty, Iowa, to Williamston, Michigan.

That age-old fool-proof distinctly male plan—“I know a guy who knows a guy”—put me in reach of a double-axle trailer, but Guy #1, my father-in-law, felt better about asking his friend, Guy #2, to loan me his trailer if I’d drive not my 13-year-old Chevy Z71 (its rusted out rocker panels, cab corners, and wheel wells newly acquired to replace the deer-bashed Ford and its clutch, both gone the way of all flesh 20K shy of the quarter-century mark I was hoping to reach before I even thought about unloading it) but, instead, my father-in-law’s new Dodge Ram, complete with Trump stickers in the back window.

The scheme was almost as complicated as that sentence. But, like the sentence, it sort of cohered.

So I agreed to cover about 800 miles of blacktop being thought a supporter of the Disgusting Narcissistic Demagogue (not that I voted for the Mendacious Globalizing Technocrat) in order to bring the Bobcat home.

I now pass over the problem with the valve-stem leak on the newest of the four trailer tires, which the good folks at Jack’s, formerly Tire Marketing, fixed for me, to record this bit of surprising news: when I got to Garry’s and finally got the tiller loaded—I had to do that with the forks, because the ramps I’d borrowed from the boys on the grounds crew were too short, and thus made the ascent in to the trailer too steep, to allow me to drive the tractor and its implements on all in one deft motion—I noticed upon closer inspection that the trailer was actually little more than an enclosed livestock hauler. There was but one hook on the inside, which isn’t ideal if you want to strap down and secure a tractor. It was time to get inventive.

So in keeping with the general theme of dumbassery that pervades and unifies these dispatches, I shoved the ends of my ratchet straps through the rusty walls of the trailer and hooked them onto the rusty wheel wells outside it. This would have to do, even though I was sure it wouldn’t.

My last act after accepting from Garry’s own excellent eye-roller a cup of good strong coffee for the long day’s journey into night was to stop at the grounds building and drop off the ramps that almost proved inadequate. A woman from one of those offices that makes the college run smoothly in spite of its administrative blunderers and faculty boobs spotted me stepping out of a truck apparently owned by someone hoping America would be made great again. She stopped to give me a proper dose of shit, but when I told her that the shiny Dodge was not mine and then, seeing her skepticism, asked her whether I was ever known to drive or own a vehicle this new, she allowed that that was a good explanation for the stickers and drove off.

Into the shed went the ramps, and then, at seven p.m., the lonesome Midwest sun dropping behind me, I headed east on I-80 in a vehicle that so far surpassed my experience of cars or trucks that not only didn’t it have CD player; it had nothing that resembled a radio, just something calling itself Sirius, which apparently expected me to take it seriously.

I drove in silence until, nearing midnight, I stopped inside the borders of my beloved Michigan to gas up and check the cargo.

It had, of course, shifted—enough, in fact, that I would spend the next 300 minutes white-knuckling it through deer country wondering whether I would be able to straighten the tractor out enough to drive it off the trailer, a question that troubled my sleep once the perilous journey had ended and at last I slid into bed and felt with my rough left hand that longed-for and welcoming silky warm right thigh.

A few hours later I was up—in jeans rather than jorts—and driving my new Bobcat off the livestock trailer. Piece of cake. Next weekend, under less stress, I’d haul nine laying hens in the back of a much older and politically unaffiliated truck, tales of which will be reported in our very next installment.

The End We Imagine

Christopher Lasch and the Lasting Dilemma of Localism