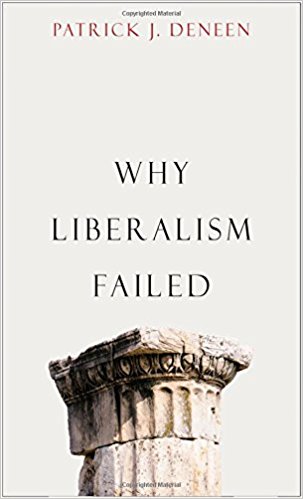 Because he just couldn’t manage to get on board with Permitted Thought. He couldn’t get the team spirit. He couldn’t put on a short pleated skirt, shake his pom-poms, smile a big toothy lip-glossed smile, and yell about how golly-gee things are!

Reviews and notices are coming in, not in single spies but in battalions, and—here’s the part no one expected—those who agree with Deneen think Why Liberalism Failed is a good book, whereas those who disagree with him think it’s a Bad Book.

And always there are those who take the long view of things—you know, the view that extends over the vast regions of time marked by a single epoch whose shelf-life was stamped on it from the beginning by the physical limits liberalism promised to overcome. Writes one reviewer, for example:

But, one may say, hasn’t liberalism in the classical sense been rather successful? Hasn’t it managed to improve living condition for, well, billions of people—to give them unprecedented say in their government and control over their lives? In fact, hasn’t it achieved a certain global dominance?

But let us hasten to the obvious conclusion:

Mr. Deneen doesn’t have to propose sailing off to some undiscovered country to pursue his vision. That’s because his community would readily find the security and freedom it requires within liberalism’s horizon.

You grow accustomed to the general failure of imagination that prevails. But this is the very Orthodoxy that card-carrying liberals can’t stand: the faith once and for all delivered.

(I should also mention that when Shakespeare gave us “undiscovered country” he wasn’t talking about another place in the here-and-now.)

Well, do the economy a favor and buy Why Liberalism Failed (which is already an amazon dot hell best-seller in political theory). It will be more money in Deneen’s pocket for buying you a drink the next time you see him. But be sure to read it pat! You’d hate for Oprah to get a hold of it before you do. That would make you look like another follower-of-trends, like people who think everything is just golly-gee!

Aristotle and the Cult of the Immediate

The Republic of a Restaurant