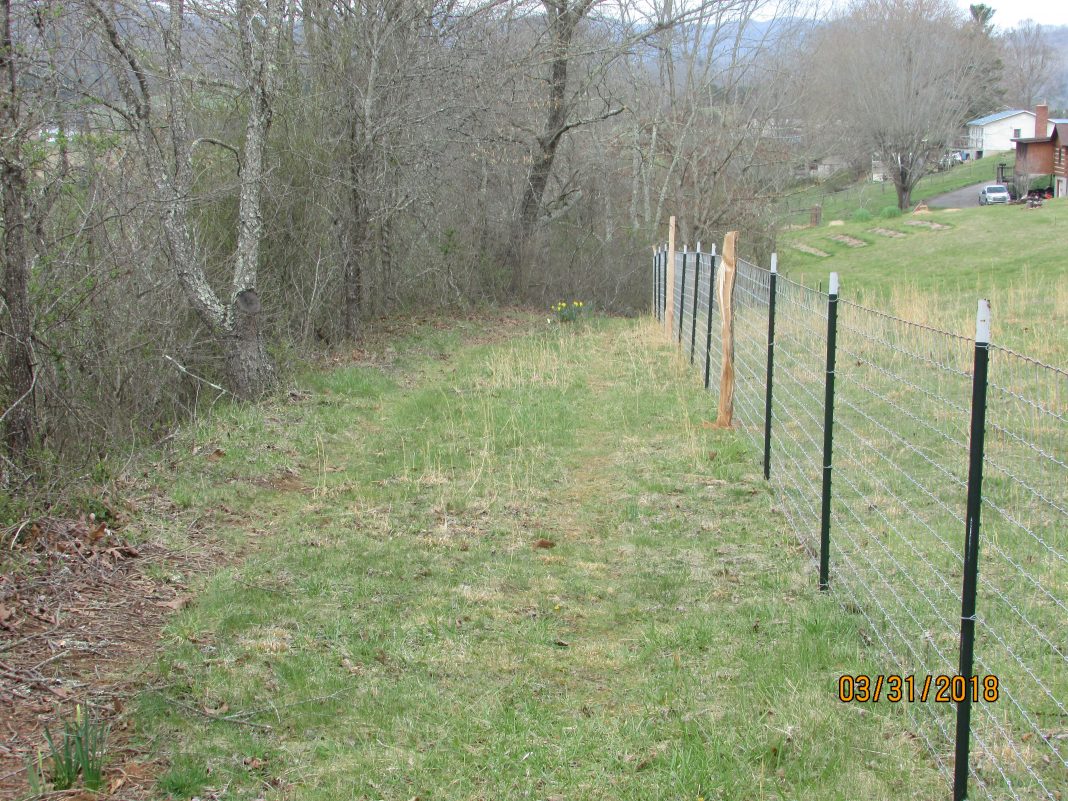 Robert Frost begins one of his best known poems by stating, “Something there is that doesn’t love a wall.” The New England poet is appropriately vague: he does not know the “thing” that works to undermine and topple the stone fences that stand between his property and his neighbor’s. The unknown agent that undoes fences is all the more unsettling, perhaps, because Americans possess such an abiding love for fences. We appreciate their pragmatic value as a means of controlling livestock, whether protecting them from predators or protecting gardens and fields from them. They also provide a very visible reminder of property boundaries; the neighbor in Frost’s poem suggests their peacekeeping function when he repeats, “good fences make good neighbors.” Fences that traverse the middle of suburban parcels and keep nothing in or out make clear that for some people, a fence can be a purely aesthetic pleasure. Some fences perform all three roles, blending utilitarian, legal, and artistic functions.

Fencing also deserves consideration as one metric of American history. If the existence of the Frontier formed the character of America (as historian Frederick Jackson Turner argued in his 1893 Frontier Thesis), the work of converting the Frontier into property by erecting fences might represent the quintessential American act. The creation of stone fences in New England and split-rail “worm” fences in Appalachia functioned as local claims that signaled the ongoing dispossession of indigenous peoples. That operation occurred on a new scale after barbed wire was patented in 1867. All those newly fenced acres—in New England, among the mountains east of the Mississippi River, and on the western plains—became something different than they had been; their enclosure folded them within the colonies and, later, the nation-state.

Despite their versatility and ubiquity—both historically and today—one would be hard-pressed to determine the ur American Fence. American approaches to fencing remain diverse even in the face of all the homogenizing forces pushing us toward sameness. But if one pays attention to the fences present alongside the uniform interstates and between the familiar McDonald’s, regions of the country are still discernible. This fact struck me full force this summer during a cross-country road trip.

Part I — Travels with Zady: in Search of American Fences 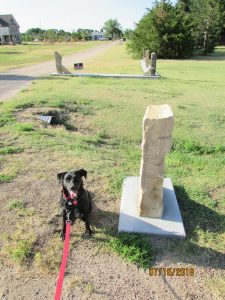 The end of day two on the road dropped us—Husband, Wife, and our dog, Zady—in Goodland, KS, part of “Post Rock Country.” The name does not describe a region famous for creating a niche Country Music sound that emerged after the Rock ‘n Roll era. Instead, “Post Rock Country” refers to the hand-quarried limestone posts from which nineteenth-century farmers built their fences.

The rows of stone posts that line this arid region stand like monuments to the hard work of the communities who erected them. Determined to farm this treeless expanse, they peeled back the sod and quarried stone posts from the uniform layer of limestone underneath. Exposed to the air, the rock posts hardened; properly set, they outlasted the barbed wire strung between them. The webpages for both the Kansas Historical Society and the Rush County Historical Society provide additional information about the epic endeavoring of these settlers. 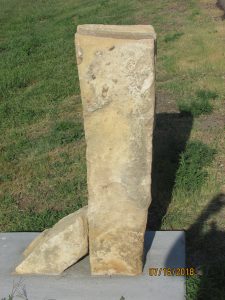 Today, the posts remind us that crop agriculture is sometimes a very bad idea. The low average rainfall and the drought cycle of the arid plains mean that regular fires prevent forests from growing, and that when plowed, the land will sometimes blow away. As an alternative to wooden posts cut from the forests of wetter regions, the stone posts that still stand underscore that sod and ruminants are an excellent formula for creating calories on “marginal” land.

Settlers who traveled further west had a different set of regional challenges to overcome. In the glacial valleys of Western Wyoming (and, presumably, elsewhere), abundant timber was available, but the moraine of boulders, stones, and gravel left behind by the glaciers proved a strong disincentive against post-hole digging. 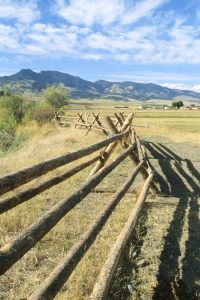 Some of those who farmed Jackson Hole, Wyoming, and the areas that would later form Grand Teton National Park responded to these circumstances with Buck and Rail fences. Also called Buck and Pole or “Jackleg” fences, one could argue that these are an updated version of the old split-rail “worm” fences—an innovation made possible by the greater availability of metal nails and wire. Essentially a rail fence set at an angle so that every vertical post leans against a “buck” or a “leg,” these fences required a lot of timber but worked on various terrain and did not require digging holes in rocky ground.

Even fences that respond to modern circumstances can signal a region’s identity. Driving through Southern Wyoming, I kept noticing lines of tall, sturdy wooden scaffolding running at odd angles inside fenced fields. I was puzzled. Had someone planned a massive billboard campaign only to go belly up when the Recession struck? Was I looking at art installations meant, perhaps, to critique political campaigns that ignored the permeability of walls?

If it had been any season other than late July, I probably would have spent less time confused. I am familiar with snow fences. But the versions I have seen are temporary and seasonal. They are also flimsy things, and never over four feet tall. The Wyoming version should be insulted by being lumped into the same category as their puny, eastern kin. These permanent, reinforced walls of two-inch lumber warned of the winter weather in this region; here, they declared, quantities of dry snow blow in the wind and drift to dangerous depths.

A region’s climate and the natural resources it provides—the “genius of the place”—shape the fences there.

A more systematic thinker could compose a fencing flow chart. A region’s climate and the natural resources it provides—the “genius of the place”—shape the fences there. Coupled with the hardware available from a sometimes distant industry, the particularities of the locale are expressed in the pattern of agriculture that grows up. Yankee farmers in colonial New England responded to the abundance of rocks in otherwise arable fields by piling them into fences. Generations later, settlers of the arid West chose to leave the same kind of glacial residue in place, and to construct buck and rail fences across glacial valleys. In short, the variety of fences across the country point up the particular characteristics of a region.

Part II — A Fence of My Own, and a Little Livestock

Having just fenced a meadow that takes up half my property, I had fences on my mind before the trip. I had planned, and considered, and mulled, and imagined for twenty months before breaking ground on my fence. It was a big decision. It would open up new possibilities and foreclose others. The fence would shape a lot about the place, especially our routes through the property and what kinds of stock we could raise. I also wanted to find that sweet spot between quality and durability on the one hand, and affordability and ease of construction and maintenance on the other. 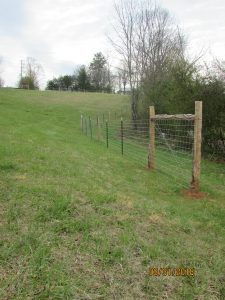 The intersection of those concerns resulted in an interesting fence. “Square Deal” woven wire with a three-inch grid stretches between locust corner posts and braces. Metal T-posts alternate with an occasional locust post along the rows between the corners. A strand of barbed wire runs along the ground; I could add another above the woven wire if necessary.

In some ways, the fence is “artisanal.”

Digging and setting the posts by hand gave me a lot of time to think, and also facilitated conversations with neighbors. In one case, not enough time had passed between my internal philosophizing and an encounter with a neighbor.

I was well into the project and had been musing about how my fence—designed to keep lambs safe from coyotes and other predators—would work almost as well at keeping dogs in. At that time I owned one dog but no sheep (in large part because I had, you guessed it, no fence). I decided that at that particular moment in time, it would be most accurate to describe my activity as the construction of a private dog park. I filed the anecdote away for later, confident that my wife would appreciate such an odd concept.

That same day, a neighbor I had not yet met was at work with a pole saw. She was nearby, just on the other side of the tangled bank that separated my field from her driveway. She returned my greeting and, seeing my tools and the line of posts I had set, asked if I was building a fence. A simple “yes” would have been the correct response. But my new anecdote was too-ready at hand, and so I added, “I have just decided that I am building a private dog park.”

This stranger was understandably unprepared for my particular brand of sarcasm. (And probably confused: who decides what they’re doing halfway into the work? whoever heard of a private dog park?) The joke fell flat. “. . . Oh . . .” she said, “. . .well, have a nice day.” I told my wife that evening that I had met a new neighbor, but that we probably wouldn’t be hearing from her any time soon.

Obviously my exchange with this neighbor did not place us on the fast track to a close friendship. But I wonder if the farmer in Frost’s “Mending Wall” would still classify me as a good neighbor. The only qualification he mentions–a good fence–is now in place. As of this writing the fence is at work keeping my sheep out of my neighbor’s driveway. Perhaps that is enough to earn the title of good neighbor.

How long I will be able to retain that title depends, I suppose, on how well the fence holds up over the long term. Right now it is an adequate container for our sheep herd, and so far it has also been enough of a deterrent to turn back the things that might harass or attack the sheep. It is also, to a moderate degree, a product of this region. Built from rot-resistant black locust native to these mountains, I hope it will stand for many years: not only because it’s a commentary on the quality of my work, but also because it carries forward the agrarian pattern of grass → ruminant → human on this particular plot of ground, in a neighborhood where Deere outnumber livestock. It situates me in a caloric relationship to these acres and to human history—a place I’m thankful to be.