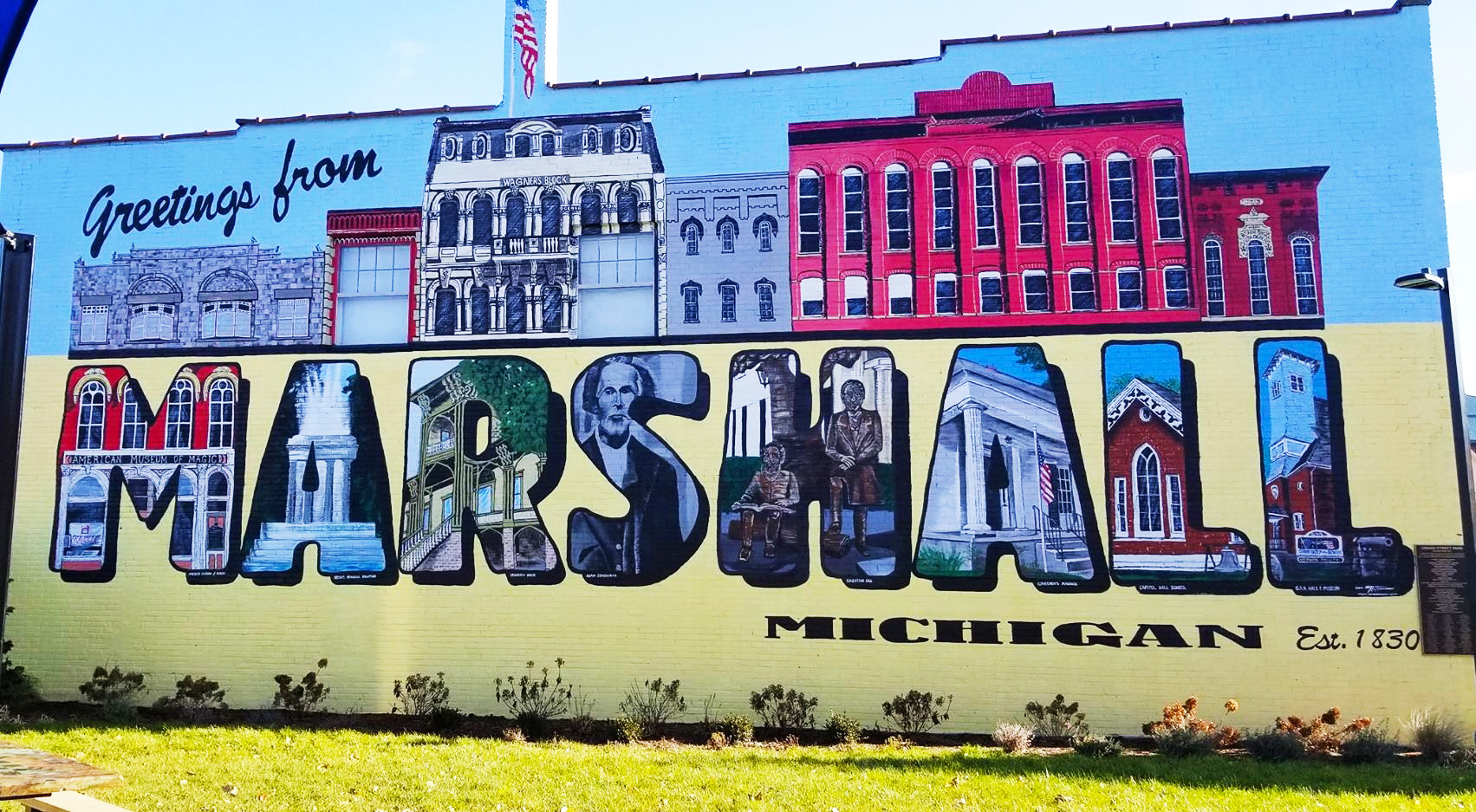 On my way to work at the local weekly newspaper, driving down East Mansion Street and then West Michigan Avenue in downtown Marshall, I pass three people I know. One holds a white paper bag in his lap as he sits on the worn-down bench outside Louie’s Bakery. I imagine he’s itching to dig into Louie’s famous nut rolls. Another person walks her dog, heading in the direction of Brooks Memorial Fountain. This fountain, stationed in the center of the grassy roundabout, is Marshall’s focal point and is often the destination for couples who seek its surrounding benches, children who attempt to swim in its promising yet off-limits pool, and local musicians who the Youngish Professionals Committee brings in for their Fridays at the Fountain concert series. The other person (the founder of the Youngish Professionals Committee) I catch toward the end of his jog as he slows his pace and turns into his driveway. I see him later that day at the City Council meeting.

I impulsively stop for coffee at a relatively new café toward the end of West Michigan Avenue. I’ve come to know the owners after writing an article on the grand opening of their business. I also know their kids, who lead the young adults group I attend at the Bible church off Old U.S. 27 North.

I order my coffee and chit chat with one of the owners, and we take our time talking about each other’s lives and the upcoming fair and the hardworking 4-H kids who participate in it. I don’t feel rushed to get to work because the office is a mere two minutes away, tops. I could walk there from here, traveling the remainder of West Michigan Avenue until I reach the Fountain Circle—the roundabout—turning left onto South Kalamazoo Avenue, passing Side Track Ice Cream, Oerther’s Nursery and Feed, and Legg Lumber until I reach the ad-visor&chronicle, across from Dark Horse Brewery.

In fact, I’ve walked Marshall’s landscape quite a bit, especially while working. I’ve written articles on many downtown organizations, and as a result I have walked that route—from South Kalamazoo Avenue to the Fountain Circle to West Michigan Avenue and back—to get to interviews in which I’ve talked with people about their unique business, the fun event they’re hosting for the community, or the ways they’ve helped those in need. We’ve talked about my job, where I went to college, what I like to do for fun. We’ve stayed in contact.

Because of my work, something that has never been natural to me—hospitality—is starting to become as second nature as the route I walk each day.

Through my job as a writer for this small-town, “folksy” (as it’s often called) newspaper, I’ve learned to walk this route without much thought. And I’ve also learned to smile and wave at the people I see along the way who I have (or haven’t) written about in the past, like the retired middle school teacher who sits observing the fountain, or the owner of the small movie theater as he’s spending the morning working at his second business, or the mayor who rushes to some grand opening or ribbon-cutting ceremony. I’ve learned to leave a few minutes early in case of conversation regarding their pursuits, my articles, or life in general. Because of my work, something that has never been natural to me—hospitality—is starting to become as second nature as the route I walk each day.

Marshall prides itself on being the City of Hospitality, and after my three months of working at its newspaper, I’ve decided this is no mere motto.

Not only have I realized this through my work as a writer, but I’ve also experienced it through my coworkers, who have extended tremendous hospitality to me, whether that be by attempting to help me find an apartment closer to town, trouble shooting my car problems and assisting me with them, bringing me fresh produce from their gardens, or offering to let me stay in their homes in the upcoming winter (if I haven’t found an apartment by then) when the country roads I take home get rough and treacherous with snow.

But Marshall’s hospitality is still something I’m getting used to and am learning to practice myself.

I grew up in a neighboring city. While still a small city with a population of about 52,000, the community is vastly different. I never ventured through its streets, stopping for lighthearted conversation and memorizing the map if its neighborhoods with my feet. Though I lived in a more urban area, sharing narrow driveways and postage stamp-sized yards with my neighbors, I never shared conversations with them. Not to say that everyone who lives there keeps to themselves, but I’ve sensed that many do and desire to keep things this way.

So when Marshall residents have casually struck up conversations with me, I’ve had to stifle my initial shock. I’ve always claimed to be a nice person, but Marshall is training me to be friendlier, more open, more neighborly.

If you really love the people, you’re not only willing to get into the weeds of their flaws, but you’re also willing to do some weed pulling—to do what you can to help them and the place become more fruitful.

But I realize that a person’s relationship to the people of his or her place is like any other relationship between people and the places themselves. Like places, people bear much fruit, but they also produce weeds. People are beautiful but incredibly messy, so human relationships, even the strongest ones, are fraught with both delights and frustrations. If you really love the people, however, you’re not only willing to get into the weeds of their flaws, but you’re also willing to do some weed pulling—to do what you can to help them and the place become more fruitful. True hospitality entails both actions.

And I hope to help Marshall, its people, and myself become more fruitful through my work at the folksy ad-visor&chronicle. By playing my part in contributing to the health of my community, I hope to return at least one ounce of the hospitality the City of Hospitality has given me.

Hospitality and the Hopi: Fragmentation and Hope