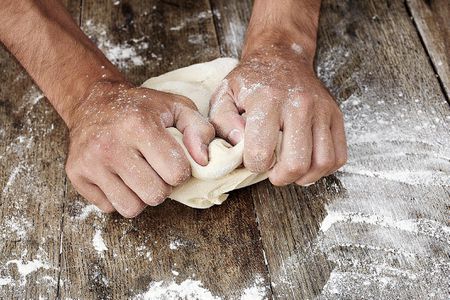 In Charles Frazier’s 1997 novel Cold Mountain, a minister’s daughter decides after her father’s death to remain on their western North Carolina farm, rather than return to the genteel life in which she was raised. Living on the farm would be difficult under any circumstances—her father neglected the place while tending his church—but in 1864 money and staples are scarce. People get by on barter and hard-nosed thrift. Choosing to live at Black Cove, Ada adopts a course of near-total self-sufficiency. Only by accepting the tutelage of a local woman named Ruby, who agrees to work with Ada as an equal partner, can the one-time Charleston belle hope to survive.

In her former life, when others had tended the garden and prepared the meals, her mind “had latched itself to the product—the food on the table—not the job of getting it there.”

Ruby introduces Ada to the exhausting, often complicated labor behind their daily necessities. It dawns on Ada that in her former life, when others had tended the garden and prepared the meals, her mind “had latched itself to the product—the food on the table—not the job of getting it there.” Suddenly she finds herself doing a great many jobs: grinding corn, killing chickens, churning butter, making cider. She learns how to bury cabbages in a shallow trench, to be dug out and eaten in the winter.

Interspersed with Ada’s story is that of Inman, the war-weary soldier who steps out a hospital window and walks home to Cold Mountain. Like Ada, Inman becomes preoccupied with food. He spends much of his journey foraging in the wild, half-starved. On a rare occasion when Inman receives a cooked meal, Frazier lingers over an old woman’s methodically prepared goat stew:

She cut it into parts. The tenderest pieces she coated with a dry rub of herbs, ground peppers, salt, a little sugar. These she skewered on green twigs and set to roast. The other pieces she put into an iron pot with water, onions, an entire bulb of garlic, five dried red peppers, leaves of sage, and summer savory scrubbed between her palms. The pot had little legs, and she took a stick and scraped coals under it for slow cooking.

In a similar scene on Ada and Ruby’s farm, Frazier describes an outdoor meal around a fire:

The spices had formed a crust around the brisket, and Ruby put it on a stump butt and sliced it thin across the grain with her knife. The inside was pink and running with juice. They ate it with their fingers without benefit of plates and there was nothing else to the dinner.

For all the temptingly enumerated particulars, the purpose of these scenes isn’t to get the reader to try out a recipe, as in certain cookbooks decked out as novels, or to seduce us with mouth-watering aromas and flavors. If we find the food in Cold Mountain appealing, that’s beside the point. For Ada, Ruby, and Inman, food takes work, beginning with living creatures one cares for or hunts, and with plants coaxed patiently from the ground.

Rereading Cold Mountain after nearly twenty years, I’m more than ever struck by Frazier’s insistence on the labor that food requires, and by the way Ada’s initiation resembles a conversion experience. I read Frazier’s novel around the time that I first read Wendell Berry, and the two authors have been linked in my mind ever since. When Ruby catechizes Ada about the sound the wind makes in different trees, and about similar experiences unique to what Ada comes to regard as “this particular place,” the Berry echoes are inescapable. Thinking about it now, I’m not sure a couple of Appalachian women in 1864 would muse about what it means to live in a particular place; but in 1999 Cold Mountain, together with several of Berry’s books, changed the way I thought about home economics—especially the way I thought about food.

Berry’s essay “Looking Ahead,” from The Gift of Good Land, became one of my jumping-off points. Where Frazier goes to the past for instructive practices, Berry ponders a nightmarish future. Writing in the mid-1970s, he contemplates life in 2001, as forecasted by a group of Purdue “futurologists.” Unsurprisingly, Berry denounces a world in which work, home life, and recreation are surrendered to technology, almost wholly detached from the physical world and other people. In the scenario that Berry summarizes, “nobody cook[s] at home but a few eccentrics: gourmets and old-fashioned people.” Food consists of products and processes that have no connection to daily life.

When I first read Berry’s essay—at roughly the period his futurologists described—I both marveled at the accuracy of the projection and joined in Berry’s alarm. Simple, everyday cooking had indeed been replaced by perpetual dining out and by a variety of pre-cooked, ready-to-eat foods. Today, after nearly another two decades, Berry’s concern seems if anything quaintly understated. Instead of “gourmets” we have self-conscious foodies. We alleviate the tedium of cooking at home by watching contestants cook on TV, by ordering meal kits in cardboard boxes, by learning “hacks” that make cooking less of a pain in the neck. We’re more obsessed than ever with the food on our tables—just don’t bother us with the job of getting it there.

I knew when I read The Gift of Good Land that I wanted to be one of Berry’s “old-fashioned people.” I wanted to be Ruby slicing that crusty smoking brisket, or the goat woman feeding Inman that delectable stew. What I sometimes wonder about now is why. Why be old-fashioned? What’s so great about growing it, baking it, cooking it yourself?

The food I produce on my own tastes good. At least my family says so when I make pretzels or curries or pizza, or serve green beans or a salad from the garden. But deep down I know that what they’re enjoying is the savor of the familiar, and not any spectacular gift to the palate. The fare at our place is predictable and unadventurous, adhering to a modest round of standbys. I’m not shooting for exotic or “amazing.” Nor do I hope my meals will add years to our lives, though we inevitably go easy on the salt and fat. If our diet makes the doctor happy, that’s a nice side benefit. I don’t even see growing a garden, baking bread, or soaking a pot of beans as signs of any particular virtue. I’m not comfortable with the idea that there’s something noble or pure about spending long hours in the kitchen. I’m not doing this to be better than someone else.

I love producing my own food because I hate being a consumer.

As far as I can tell, I love producing my own food because I hate being a consumer. Here again, I was probably spurred on by Cold Mountain: “Ruby had always functioned at arm’s length from the buying of things and viewed money with a great deal of suspicion even in the best of times, especially when she contrasted it in her mind with the solidity of hunting and gathering, planting and harvesting.” But I also developed my aversion through my own experience, during time spent in supermarket aisles and big-box stores. Paul Fussell, the literary critic and author of The Great War and Modern Memory, liked to call himself a “pissed-off infantryman.” With the utmost respect for the chasm between Fussell’s experience and my own, I’m tempted to adapt his phrase and call myself a pissed-off consumer. (If you feel the same way, you might appreciate a cathartic little gem by Neil Young and Crazy Horse called “Piece of Crap.”)

Being a consumer, you might have noticed, means being jerked around. One day you discover that your favorite yogurt or ice cream has been clogged with some gummy filler. Cans of tuna become so tiny, while costing the same amount, that you must decide whether to buy twice as many cans or simply eat less tuna. Trusted products disappear from the shelves. Cereal boxes mysteriously change shapes and sizes. All of this while straight-faced manufacturers claim that their only aim is to serve.

I’m somewhat less reluctant to buy food at farmers markets, and those “farm-to-table” establishments beloved by foodies. Here at least I know what I’m getting, the theory goes, and can buy a local, healthy, “responsible” product. But such is my distaste for letting others do the work that even these enterprises can strike me as consumerism with a halo. When my wife returns from the farmers market with a bag of vegetables, she laughs at me for turning up my nose at “other people’s” produce. I can’t help it. Like the shepherd who knows his sheep, I can tell the difference between a tomato from my own garden and one from the organic acreage just outside of town. I guess it comes with living in an extremely particular place.

Of course I still go to grocery stores, both the natural foods co-op and the big shiny supermarket. When the first frost arrives, and my little garden hasn’t yielded enough to preserve, we get our vegetables where we can. Sometimes we eat out, to celebrate an occasion or just take a break. But when I’m fed up, so to speak, with the downsizing, the packaging games, and the umpteenth flavor or texture change, it’s exhilarating to step around the whole quagmire and do it myself. I picture a basketball player backing up a defender, then whirling to find an open lane to the hoop.

What I want, obviously, is to get out from under the thumb of the merchants and the manufacturers, and to take control myself. But no sooner do I spot that impulse than I know it for an illusion. Control? I can garden and bake and boil all day, but I’m still limited by where I live, and by my need of others. We crow over the pizza I make with our own tomatoes, garlic, peppers, and basil—but I’ll never own a cow to make our own cheese, or raise wheat for our own flour.

I wanted the satisfaction of kneading the dough, keeping an eye on its rising, and fashioning it into loaves with my own sticky hands.

Quite a few years ago, around the time I was discovering Cold Mountain and Berry, my father gave me a bread-making machine. I was crushed—disappointed not so much in the gift as in the well-intentioned giver. The ugly device has long since left our house, but it did teach me something about satisfaction, which Berry, in “Looking Ahead,” says the futurologists miss in their grasping for control. Perhaps for the first time, I understood that natural ingredients, home-made taste, and good smells weren’t enough. I didn’t want just the loaves—the precise and uniform loaves—that a bread machine could produce. I wanted the satisfaction of kneading the dough, keeping an eye on its rising, and fashioning it into loaves with my own sticky hands.

One afternoon several months ago I went to my friend Dave’s house to play guitars. After a couple hours of extremely amateur music-making, interspersed with lots of talk, Dave’s wife Stacey sent me home with a fresh-baked loaf of sourdough bread, which my wife and son and I enjoyed with our supper. For some reason, I’ve never gotten around to fitting sourdough bread into my repertoire. Stacey’s gift was a humbling reminder of all the foods I’ve been too timid or lazy or busy to attempt. It was a reminder that getting food on the table is a life-long job, an ever-lengthening list of satisfying chores. As Ruby replies when Ada reports hearing “the sound of wind in the trees”: “Just general trees is all? You’ve got a long way to go.”

Thinking about the Post-Pandemic (and, Maybe, the Post-Suburban) Neighborhood

The Pandemic and the Primacy of the Household