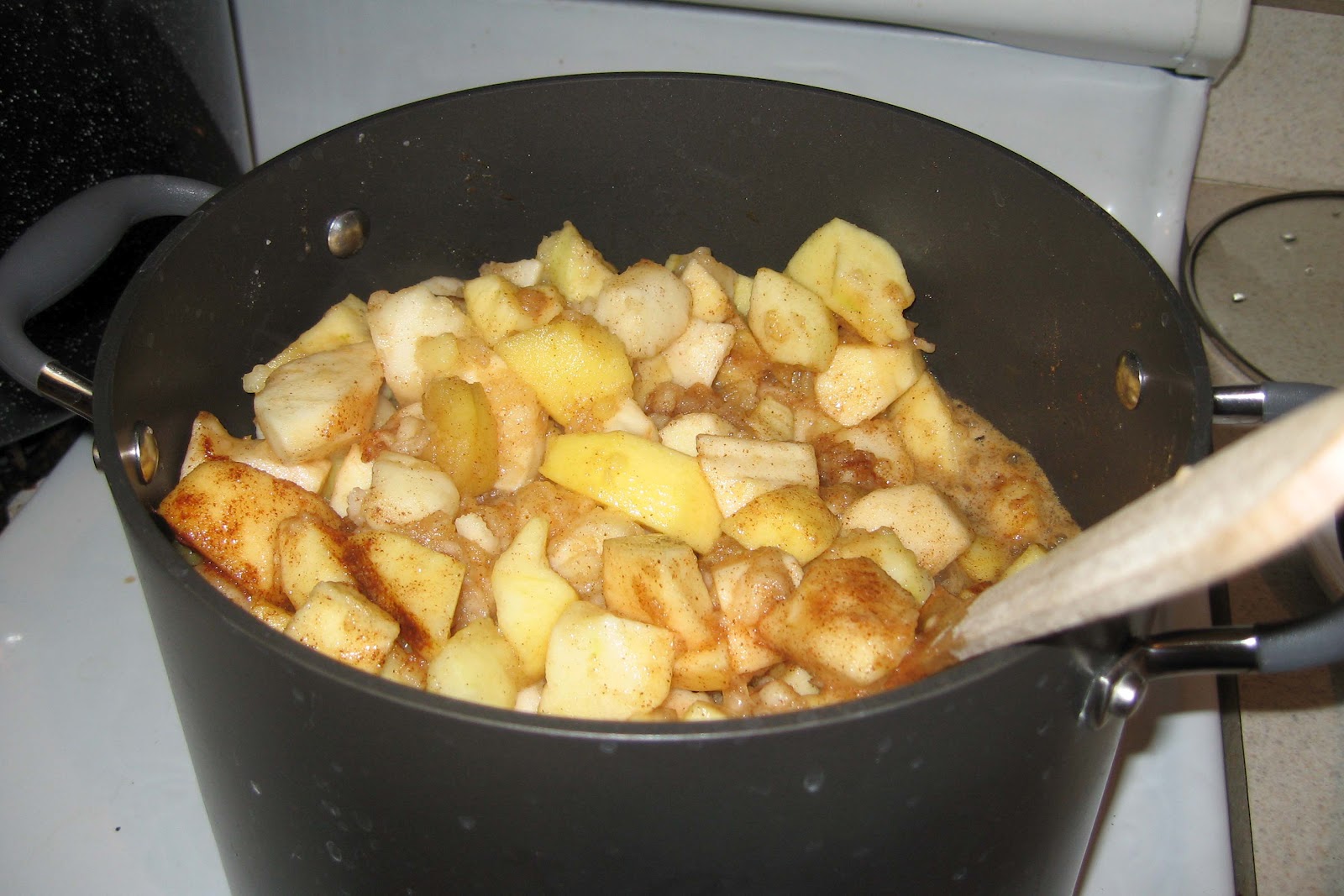 It’s 9 a.m. on the Saturday after Thanksgiving, which seems like a reasonable, civilized time to make apple butter. Yet in my mother-in-law’s farmhouse kitchen, 9 a.m. might as well be noon. (Even if we did—ahem—agree on 9 a.m. two days earlier.) When I arrive, a big batch of apple butter bubbles away in her blue enamel roaster oven. A half-dozen quart Mason jars stand warm and sealed on the Formica counter. Doggone you, Marie. She’s likely been at it since 6 a.m., her paring knife ablur as she filled bowl after bowl with peels from a bushel of Golden Delicious. I know the routine, because I’m married to the next-gen incarnation of her.

“Oh, apple butter’s easy,” she says, with an endearing Virginia twang that her Michigan-bred daughters can’t hear because they grew up hearing it. “You just peel your apples and cook em’ down on the stove.”

Of course, it’s not that easy. No more than it’s easy to make, from scratch, her angelically light biscuits, for which she has no written recipe. No more than it’s easy, at age 78, to push mow your half-acre lawn on a muggy August afternoon. No more than it’s easy to run an 80-acre farm and raise three kids on a school janitor’s income, which she did after her husband was killed in a tractor accident. Such acts of creative sacrifice are only easy if you don’t count the cost, and are able, through some crucible of spiritual transfiguration, to convert grief, toil and suffering into cheer and generosity.

How she has done that, I have never been bold enough to ask. But in both apple butter and a life well-lived, one can see the same patient reduction at work. The sauce thickens, and the depth of flavor intensifies across the seasons. The spring sun, the bee-swarmed blossoms, the summer droughts and fall frosts—all these mingle with love and mercy; with gain and loss. All that’s unessential evaporates away. It’s this distilled essence that infuses the final product, whether it’s one’s character or something you eat straight from the jar with a spoon.

Whatever the end result, it begins here with apples. And for that, it helps if you live next door to an orchard. Marie has done so since 1960, when she and her husband, Howard, moved to Three Rivers, Michigan, from Blacksburg, Virginia. They bought a farm across from Corey Lake Orchards, a 700-acre operation owned by Howard’s brother, Dayton, and wife Allene.

“Yes, Zoe and I lo-v-v-e to pick apples,” says Marie. Zoe is her dog, a Wookie-like creation of mixed Airedale heritage. “I stand on the mule (an ATV used for farm chores) to get what everybody’s missed.”

If that’s not a recipe for a broken arm or leg—an older woman alone in an orchard, standing in the bed of a small wagon, reaching and straining to pick apples from an unstable tree—then I don’t know what it is. But good luck trying to stop her.

The picked apples sit in wooden baskets on her back porch, a magnet for bees and yellow jackets on sunny fall days. The Golden Delicious variety she prefers aren’t “good keepers,” though. By Thanksgiving, even those stored in an unheated mud room can lose their crispness. Yet until January, they’ll do just fine for pies, apple crisps, apple sauce and apple butter.

For the butter, Marie first peels the apples and cooks them for 20 minutes in a pot. Then she runs them through a food mill, and hers is nothing electric or fancy: just a saucepan-sized device with a sieved bottom and hand crank. When you turn the crank (which she must’ve done, what, 1.25 million times?) it turns a paddle that forces the soft fruit through the sieve. Any seeds or skins remain in the pot. At this point, and you can’t go wrong either way, you’re left with silky-smooth apple sauce or the raw material for apple butter.

Over the decades, Marie and Allene must have made enough cases of apple butter to fill a bread truck. That was before leukemia claimed Allene a few years ago. But she’s still here in spirit, her original recipe preserved like a saint’s relic in a Ziploc sandwich bag. It’s written on lined yellow paper, in Allene’s 1950s schoolteacher cursive:

Boil apple sauce until thick enough to heap on a spoon. Continue slow cooking and stirring until liquid does not separate from the butter when put on a cold plate. Fill jars, add canning lids and seal.

Sugar = 1 cup or less per quart of apple sauce
Cinnamon = ½ tsp. per quart
Allspice or nutmeg and red cinnamon candies (Red Hots) may be added

Alas, all this measured preparation took place before my “late” arrival. Right now, the kitchen is fragrant with apple steam, the old windows foggy with a Currier and Ives artfulness. As the apple butter cooks, it turns a lovely ruddy gold, alive with bubbles and fumaroles that remind me of a mud pot at Yellowstone.

Marie’s right: this part is easy. And so is the conversation as she peels another batch of apples. That’s something lost in today’s headlong rush to use machines for light work that’s patently enjoyable. With hands on autopilot, the mind’s free to converse and reminisce. This holds true whether there are apples to peel, ears of corn to shuck, cherries to pit, beans to shell or firewood to stack. Such amiable chores, done in good company, can become a hearth stone for sharing family lore and memories.

The stories that captivate me most come from Marie’s childhood on Spruce Run, deep in an Appalachian holler. She lived there with nine siblings in a home with no electricity or running water. She churned milk from the family cow into butter. She went barefoot all summer and was 12 years old before her father bought the first family car.

“I look back and think, we couldn’t have been that poor, but we were. My brothers picked apples, but in an orchard 10 or 15 miles away. They weren’t allowed to take even one apple home. Then one day, they brought home a bag of Red Delicious. We thought it was wonderful: we all got one apple!”

One apple. You can understand how someone raised in such grinding poverty could fall prey to nouveau riche pretensions, should they ever come into money. The hayseed largesse of Elvis, with his fleet of pimp-mobiles and guitar-shaped swimming pool at Graceland, comes to mind. Not so Marie. If she overcompensates, it’s with the rivers of apple butter, stewed tomatoes, and pickled asparagus that flow seasonally from her farmhouse larder.

In this cheery, apple-buttery kitchen, what I didn’t expect to hear was a memory that, even 70-some years later, was still raw in the telling. In the 20 years I’d known her, she’s always been one to focus on the good. But there it surfaced, as the last batch steamed away in the blue enamel roaster.

It had happened alongside the majestic New River, which flowed just south of the family home. Marie was six years-old at the time—and babysitting her 13-month-old brother. Yes, babysitting. Today, that sounds like a “someone-should-call-Social Services” outrage. In that time and place, it was an economic necessity for big Appalachian families such as hers. Even a 1st grader had her share of family and work obligations to assume.

Not that this made her duties any less fraught with potential disaster.

“It was summer, and I was supposed be watching the baby,” she recalled, wiping her damp forehead with the back of her hand. “But he crawled across the yard and onto the tracks (which paralleled the river) before I even know he was missing.”

Minutes later, a Norfolk and Western freight train steamed down the rails, loaded with bituminous coal from the mines that vein the Blue Ridge. She heard the screech and spark of brakes. She heard the screams as neighbors ran from their homes to a tragedy.

The train had wrenched to a stop, its wheels at rest … by the baby’s head. His skull was fractured. But there was no doctor, no ambulance and no hospital nearby. They called in haste for the local midwife. She was a woman possessed with rare gifts of healing and a deep folk knowledge of medicinal plants. For two days, she ministered and rocked the boy in her arms. Outside, family and neighbors gathered and “prayed without ceasing” (Thessalonians 5-16). And behold, the baby with a cracked skull lived to tell.

Remarkably, it’s not so much the miracle of survival that moves Marie now, but her perceived role in the accident. She still tears up when she recalls how, as a 6-year-old big sister, she shirked her duty. She just can’t forgive herself that; after 72 years, the social dictates of mule-powered Appalachia still hold sway. Although being Marie, she also can’t help but praise what Providence has wrought from it.

“Denny still has a steel plate in his forehead above the eyebrow,” she said. “And you know, God has used him mightily.”

Well, yes. And perhaps big sister no less than little brother. Try her apple butter on warm cornbread to taste the goodness from whence these blessings flow.