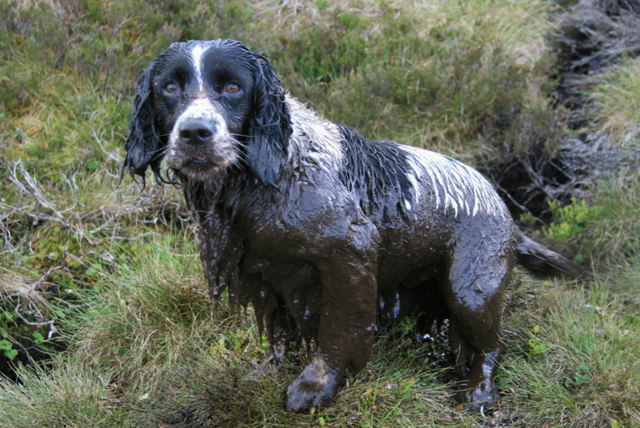 From a distance, you couldn’t be sure of anything except that it was flat. All we knew was that for several days, our black lab, Melody, had dragged around a carcass of unknown origin. She’d throw it gleefully in the air like a rancid bouquet tossed by the bride at a zombie wedding. Then she’d shake it with mock fury, and roll headlong until its crusty residue perfumed her neck and collar.

This was early spring, and not until Saturday afternoon, when she left it on the porch, did I realize the tattered thing’s true identity. Given its ruddy color, I’d assumed it was the flattened remains of a squirrel. Yet from one intact corner there protruded a pussy willow-soft tuft of paw. From another sprouted a delicate spray of wiry white whiskers; clearly, the deceased had been of feline origin.

We dubbed it Flat Cat, and for the next two weeks, the dog and her gamey chew toy were inseparable. It was “Mel-Mel’s” habit to run out and greet my car as it pulled into the driveway after work. With Flat Cat’s arrival, this endearing routine took on a new twist.

“Where’s Flat Cat? Where’d she go?” I’d ask, in the inane, sing-song voice that adults reserve for dogs and babies. “Go get Flat Cat! Go get her!”

Mel-Mel would dash off, retrieve Flat Cat from the side yard and repeat her toss-and-roll maneuver. After several days of such rough use, it began to look less like an ex-cat and more like a mangy loincloth for a very small caveman. Eventually, Flat Cat disappeared altogether, which likely meant that it was eaten in its crunchy entirety.

It’s reasonable to ask why a person would stand idly by while their dog did such a dreadful thing. Relatedly, you could ask if a person would let their dog eat a dead coyote; consume fresh piles of cat, deer and rabbit scat; browse on the spoils of a compost pile; unearth a recently buried and much beloved family cat; and, eat a baby rabbit that’s just been dug, still squeaking and writhing, from its grassy burrow.

If a person answers “yes” to these questions (which I can to all of them) then chances are they’ve got a country dog. Or at least a city dog that lives by country dog rules. By that, I mean a Paleo dog that’s left as free as possible to pursue its true doggish nature. A country dog enjoys plenty of freedom with all the adventure and hardship that a life lived out-of-doors entails. It’s a dog that’s cared for, with ample food, water, shelter, and vaccines–but unless sick, is never pampered. It’s a dog that might not live as long as its indoor brethren, but one whose life is infinitely richer in musky pleasures. Most important, it’s a dog that’s never treated like, or expected to act like, a four-legged human being. A country dog is all that a “fur baby” is not.

Country dogs are an artifact of a less urban, less rulebound America. But paradoxically, while city dogs enjoy ever more doggy parks, doggy play dates and dog-friendly shops and stores, their elevated status burdens them with human-dominated constraints. Rarely, if ever, are city dogs free to hunt, procreate, roam nose-to-the ground off-leash, or even relieve themselves privately, without some hovering human waiting to pounce on their still-warm aftermath with one of those dismal little plastic poop bags.

It wasn’t always so. As recently as the 1970s or 80s, dogs occupied a lower rung on the social ladder. Even in town, they might live in a backyard dog house where they chewed real bones and survived on table scraps or cheap canned pet food. They had dog names like Sport, Dixie, Buddy, and Sarge. They were friendly enough, but your hand might smell a bit ripe after you petted one. Except for the rabies and distemper shots required by law, they rarely saw the inside of a vet’s office. They would happily go years, as ours often did, without a proper bath.

Today, millions of Americans have elevated their dogs to the status of life partner or surrogate child. In fact, single adults comprise the fastest growing segment of dog owners. In One Nation Under Dog, Michael Schaffer writes that 85 percent of dog owners refer to themselves as the Mommy or Daddy of their canine. Forty-three percent of dog owners say their pet sleeps in bed with them at night. It’s also telling that in 2018, all of the top 10 female dog names were of human origin: Bailey, Molly, Sadie, Lola, Daisy, Luna, etc.

Across the United States, spending on pets mushroomed from $15 billion in 1995 to $72 billion in 2018. We now have pet nutritionists, veterinary dermatologists, dog kennels with TVs, and – inevitably — lawyers who specialize in pet custody cases. The sad irony, animal experts say, is that dogs can get confused and misbehave if we treat them too much like people. They expect us to be leaders of the pack. Nonetheless, thousands of “pet parents” now medicate their animals for doggie A.D.D, anxiety, depression, and other suspiciously human-like disorders.

But what if we’re trying to make a simple, fur-bearing mammal serve a social purpose that it’s biologically unsuited to fill? Further, what if it’s not just the dog that needs therapy? As Edward Abbey said, “When a man’s best friend is a dog, then that dog has a problem.”

Now by this point, I may have insulted or defamed a good share of the 46 million U.S. households who own dogs. They consider their couch-surfing, human bed-sleeping, crochet-vested dogs as part of the family (as I do mine). They rely on their dog to give love and emotional support (as I do mine), in ways that a self-absorbed spouse, partner, sibling, or distant child who rarely calls or visits does not. So, who cares if Angel and Pretty Boy never leave their 100 square-foot patch of yard or synthetic grass? Do I expect them to go tree mountain lions or rundown meth dealers? No, but I hope that some dogs will, should the opportunity present itself. Just as I hope that some wolves will always run free to hunt elk at Yellowstone.

There’s more here to say about the virtues of good country dogs, but first let me offer two caveats. For starters, know that letting your dog enjoy country-style freedom will require more responsibility and socialization on your part. This isn’t about making your home a foreboding fortress where slavering Rottweilers keep animal control officers at bay. If you and your dogs are that antisocial, then perhaps rural Alaska would be a better place to unleash your Revenant  inclinations.

Moreover–and I can’t stress this enough–neither is the country dog philosophy an excuse for maltreatment or neglect. Country dogs, given their hearty outdoor environment, can require more vet care and attention than indoor dogs. For instance, Mel-Mel sleeps in a dog house, tucked inside a barn, with straw on the floor and a freeze-proof water bowl. Yet every evening, rain, snow, or cold, I must rise from my book and chair, trudge out to the dark barn and shut her in for the night. If I try to keep her inside, she’ll whine and scratch until I relent.

For me, owning a country dog is simply a 21st century adaptation of the bond that’s existed between dogs and people for 15,000 years running. As to what breed makes for a good country dog, that choice can be as varied as the people who own them. But for my situation, it’s been the sturdy, mild-mannered mutts that have fared best. The specialized outdoor breeds–namely, a blue-tick hound and a border collie–proved problematic. They were working dogs, bred for jobs that I couldn’t give them. I had no raccoons to hunt, no sheep to herd across the nomadic plains. My four acres were too small, and their urge to roam too boundless, for them to thrive here.

With a good mutt, I’ve found it easier to raise a country dog with a homebody’s heart. In practice, this means they learn the extent of their home ground and rarely stray from it.It’s where they’re happiest. It’s where they’ll stick around to dig, wallow, and explore–even without a fence and shock collar to bind them there.

Not being a dog trainer, I can’t exactly say how dogs and humans come to this symbiotic agreement. Although much like raising human children, I suspect that it begins with the gift of being present. A dog’s demeanor changes when they spend long hours outside with you, their beloved pack leader. They become less clingy, less likely to tear off in a manic fit like over-sugared kids turned loose at recess. Unburdened of excess energy, they’ll nose about placidly while you tend a peaceable kingdom that man and beast can enjoy together. The vegetable garden and overgrown field; the fruit trees, shade trees, and raspberry brambles that provide food and cover for birds, squirrels, turkeys, rabbits, and woodchucks. With your company and this enticing habitat at their disposal, why should they go anywhere else?

Gradually, a good country dog will strike a balance between companionship and shouting-distance accountability. They’re not underfoot when you’re in the garden or strawberry patch. They know enough to give a tractor or chainsaw the right of way. They’ll chase your barn cat up a tree, but not mail trucks and kids on bikes. Then every so often, after you’ve split just enough firewood, or weeded a long row of tomatoes, they’ll sidle up and give an amiable “woof.” Scratch them behind the ears and you’ll both feel the better for it.

All this and more we stand to lose if we relegate the age-old ways of country dogs to the anthropological dust bin. If nothing else, we should keep some country dogs around as brood stock and reminders of how the first human/canine relationships came to be. Because we, as much as dogs, need to retain some semblance of wildness. Even if it means they’ll kill little live things we wish they hadn’t, or roll with joyful abandon in offal that we find gag-inducing.

Yet these are dogs… must we micromanage their every instinct and pleasure? It’s been about 150 centuries since dogs consented to live around the hearth with humans. In truth, they’re no longer born to be wild. But whenever we can, it doesn’t hurt to unhook the leash, cry havoc, and let them live that way.