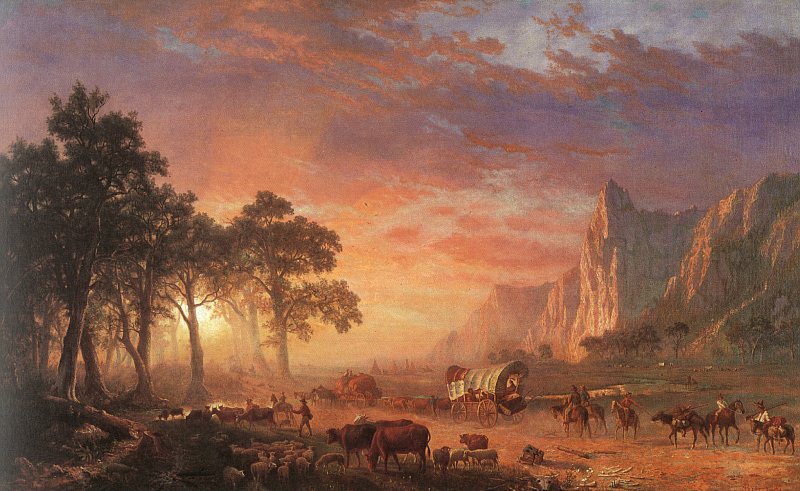 Between Part I and Part II of O Pioneers!, Willa Cather omits sixteen years. Much changes over that period. Where the Bergsons once had to “grub for every dollar” and even wondered if attempting agriculture in this place was a mistake, they now see fecundity: “The Divide is now thickly populated. The rich soil yields heavy harvests; the dry bracing climate and the smoothness of the land make labor easy for men and beasts. . . . the brown earth, with such a strong, clean smell, and such a power of growth and fertility in it, yields itself eagerly to the plow; rolls away from the shear, not even dimming the brightness of the metal, with a soft, deep sigh of happiness.”

Such a moment hovers at the climax of human accomplishment. On the one hand, Part II begins long enough after the initial strain and struggle that the founding toil is largely forgotten. Indeed, Alexandra’s brothers feel compelled to remind her that their embodied work carved the family farm out of the wild land. Unlike those drinking in the pleasure of the present, they remember the sweat and strain. And on the other hand, this moment sits poised on the precipice that comes before the drift into diminishment; none of the characters can imagine the twentieth-century calamity that will be wrought by drought and wind.

This apex moment is the kind of snapshot in time that empowers romanticism. There are others. October shelves full of canned goods advertise pleasure. The imagined eating overshadows both the steamy work of preserving and the sadness of a barren spring shelf. Even the luxury of a recently paved road pushes one toward forgetting the acrid stink of asphalt and the inconvenience of closed lanes and stop signs on poles. Though we know that cracks and potholes are fore-ordained, the pleasure of motoring along on a supple surface suppresses those rational thoughts and allows us to sink into the pleasures of this present moment.

I can gaze out my window and behold a similar icon. I installed the final door hardware for a modest shed early this summer. That evening, one end of a rainbow touched down directly above the ridgecap.

Despite taking pains, my shed will eventually go the way of all fiber and flesh. But before it rusts and rots into dilapidation it will first distance itself enough from the labor of construction to invite me to forget the hard parts, the frustrations—the blood and sweat and splinters. At that point this structure will find the sweet spot for generating Romantic musings.

I am certain I will remember, in particular, the day my wife and I raised the walls.

That day was remarkable because so much changed between dawn and dusk—a nascent building stood where hours earlier only a platform existed.

Other days of equal labor yielded far less dramatic change. For example, the day after the walls went up, we wrestled two twenty-foot, four-by-eight header beams into place. That work yielded a much less dramatic transformation. But still a banner day that I felt compelled to document with a photograph.

I respect the work of literary Romantics; I am, however, uninterested in emulating them. And so I’d like to record and underscore some of the labor behind and underneath the shed. The days of grinding and groaning that made the banner days possible.

Even the day the walls went up concealed, in a way, the hours of labor spent assembling the walls themselves. This work of measuring, cutting, and nailing happened piecemeal, a little at a time, in the confines of the garage. Because of where it took place, it went largely unnoticed by others. The public spectacle of raised walls was preceded by much private labor. But for the inconvenience of our only roofed parking spot becoming an assembly floor, that work could easily be forgotten.

There are facts about the four-by-eight header beams that also deserve recollection. They took pounds of nails to assemble, and once constructed they were heavy and awkward. I would advise others (and myself as I grow older) to recruit help moving and mounting such dead weight.

I also went to the trouble of putting concrete piers underneath the shed. Footers and piers are perhaps the easiest kinds of labor to overlook and forget: all the work of digging them is largely erased once they are filled with concrete (which itself takes work to mix and move and pour). In addition, they exist in service to what sits upon them; they play a supporting role.

The regular rains that came just before the County Inspector could confirm that my holes were up to code added a layer of wet work. Scooping water out of a hole in the ground is not taxing work, but that work of emptying is also not fulfilling.

And speaking of water, I should mention the overhang and gutters—the poorest decision I made on this project. Though the gutters currently function (knocks on wood) and the shed is completely closed in and vented, getting to this point was much more difficult than it needed to be. Less than fifty feet of fascia board mounted to the ends of the trusses would have made a world of difference. Without it, I had no choice but to mount the gutter to the ends of the trusses (not so bad). The larger problem was enclosing the overhang to prevent birds, and mice, and snakes (oh my!) from making their home inside the shed. Dozens of small pieces and multiple angle cuts later, the job is done. It would have been easier (and resulted in a better job) to use a fascia board.

But in the end, who, other than the builder, would know the hidden history of the shed: the rain that filled the footings, the fierce wind that blew the day I began its roof, and its poorly planned overhang? That weather made no permanent mark; my mistake is now almost completely covered and therefore close to invisible. And the actual work of getting to this point exists now only as memory, intangible and therefore vulnerable. How long will it take for the simple passage of time and the utility of the shed to erode those memories?

Perhaps erosion is the wrong metaphor. My romanticism, if it arrives, will have grown out of loss—the memory of my struggles will have composted, rotted away and become transfigured into an appreciation for the present. In this case, I hope that present will consist of the luxury of a shed many seasons after its construction, but still in its prime: level and plumb with glass in the windows and a sound roof.

I thus find myself in the odd position of resisting romanticism while, nevertheless, hoping that future conditions will create that temptation. I want the opportunity to someday wax nostalgic about the shed, but the courage to remain clear-sighted about its history—and its inevitable future.

My Àntonia at One Hundred