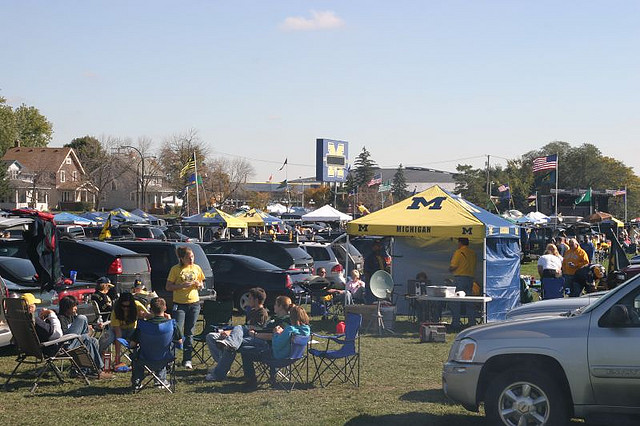 The 150th season of college football serves as a reminder of the intersection between sports and local communities. While the nationalization of sports media outlets brings games and analysis to every living room in America, fan culture retains a very distinct regional and local flavor.

College football is one of the greatest testimonies to the endurance of localism in America today. The base of college football fans comes primarily from outside the Washington DC – New York City megalopolis that dominates the mainstream media’s attention. In the past few seasons, the two dominant programs in college football, Alabama and Clemson, are located in relatively small cities in the Deep South. And despite the efforts of conferences like the Big Ten to bring Rutgers and Maryland into a predominantly Midwestern conference, the Northeast remains relatively uninterested in college football.

The Power Five conferences in college football represent, largely, distinct regions of the country. The Southeastern Conference (SEC) is synonymous with the South, the PAC 12 is a West Coast conference, the Midwest has the Big Ten and the Farm Belt has the Big 12. The ACC includes several Northeastern members (Pitt, Boston College and Syracuse), but is primarily a Southern conference. The schools in each conference have historic rivalries, oftentimes based on geographical proximity.

The biggest rivalries in college football are between schools in the same state, like Alabama and Auburn, or schools in adjacent states, like Michigan and Ohio State or Oklahoma and Texas. These types of traditional rivalries give the games tradition and meaning and create a sense of tribalism among alumni bases and fans. Based on personal experience living in Ohio, after growing up in Michigan, I quickly observed the intensity channeled by Ohioans in support of the Buckeyes (and hostility toward “The State Up North”). Ohio is a unique place in the college football world in that there is no major in-state rival. While Michiganders are often divided between Wolverines and Spartans, Ohioans from Cincinnati to Youngstown are singularly focused on the Buckeyes with a sort of religious fervor.

In a state like Florida, fan allegiance is more decentralized. Three major programs including Florida, Florida State, and Miami all have sizable fan bases. Recent success by UCF has broken down those loyalties even further. Large states like Texas and California with several major programs have similar dynamics. Loyalties to college football programs are formed in a number of ways. Alumni make up a large portion of these fan bases, but certainly not exclusively. The loyalties inherited from fathers and grandfathers, geographic location, and the success of a program during a fan’s formative years all play into a fan’s psyche.

College football even creates arguments among regions in terms of conference performance and dominance. Debates about strength and performances of the conferences themselves is commonplace. Take Paul Finebaum, who built his reputation as a radio personality covering the college game in Alabama. Finebaum has gone nationwide in recent years, doing work with ESPN and is the headliner of the SEC Network. In 2015, Finebaum wrote his manifesto entitled My Conference Can Beat Your Conference: Why the SEC Still Rules College Football, cementing his reputation as an SEC partisan. The Finebaum approach to conference loyalty has spread across college football, as Power Five conference coaches and fans delight in pointing out the flaws they detect in other conferences and their programs. Such rhetoric further heightens the regionalism that marks college football.

While these trends of localism and regionalism are prominent in college football, they are not exclusive to the sport. Baseball was referred to as America’s “National Pastime” in the middle part of the 20th century, but one national sports commentator in recent years called baseball “our best local sport.” What the commentator meant by this is that baseball’s 162 game schedule with local market broadcasting of games makes it more conducive for a regional audience to follow their local teams. While national networks like ESPN and Fox Sports broadcast select weekend games, the vast majority of baseball games are viewed (or listened to) through local media outlets. Other commentators have suggested this is one of the reasons MLB produces fewer universally known “stars” who garner the attention of their counterparts in the NFL or NBA. Baseball fans who follow their local teams know their players up and down the roster, but they may not know most of the players on teams in cities in far off parts of the country.

Similarly to college football, baseball’s historic rivalries also add intensity to the game and are based primarily on geographic proximity. The rivalry between the New York Yankees and the Boston Red Sox is considered by many to be the most intense in all of sports. The cities are separated by just over 200 miles. On the West Coast, the San Francisco Giants and LA Dodgers have a rivalry dating back to when they played in Manhattan and Brooklyn. Since both franchises relocated to California in the 1950s, they remain bitter intra-state rivals, separated by a nearly 400 mile stretch on Interstate 5. The cities of Chicago and St. Louis are situated approximately 300 miles apart, with only downstate Illinois between them. Cubs and Cardinals loyalties are dividing lines throughout the Prairie State. In all three cases, these teams play in the same division, meaning they play 18 games per season against each other.

These examples from college football and Major League Baseball provide a snapshot of how team loyalties fragment the vast American landscape. Recently, I had my first experience attending a Major League Soccer match here in Orlando. While I have limited knowledge of soccer, I was blown away by the intensity of the crowd and the pageantry of the event. Orlando City SC began play as an expansion team in 2015, and they have already attracted a loud and loyal fan base. The team has two “supporters clubs” that occupy the area known as The Wall at Exploria Stadium. The Wall is a standing-only section behind the goal on the south end of the stadium. Flag waving, drum beating, and chants are seen and heard throughout the duration of the match. I have just begun to consider soccer fanaticism, but my limited experience indicates it’s a powerful force—and one that deepens regional identities.

After the Indianapolis Colts quarterback Andrew Luck announced his retirement, he took out a full page ad in the Indianapolis Star to thank Colts fans. In this message, a man who went to high school in Texas and college at Stanford wrote, “I’m proud to be a Midwesterner, a Hooiser, and a Colt.” Luck’s message was not addressing all of America or the pundits in the national sports media, it was intended for football fans in the state of Indiana.

If sports fandom teaches us anything about our culture, it is that America may not simply be “one nation,” but many regions. In fact, when sports becomes nationalized in America, it tends to get messy and most often political. Think about recent disputes over NFL players kneeling in protest of the national anthem or the US women’s soccer team chanting for “equal pay.” This may be why sports fans prefer to root for local and regional teams rather than national ones. Fans demonstrate their support through their commitment to their school or their city’s franchise, and through opposition to their rivals. While politics today may ask Americans to choose between two factions who battle for control of the levers of national government, this binary choice does not really reflect the way people live and associate within their states and localities. Sports fanaticism may be the best representation of real federalism in America today.