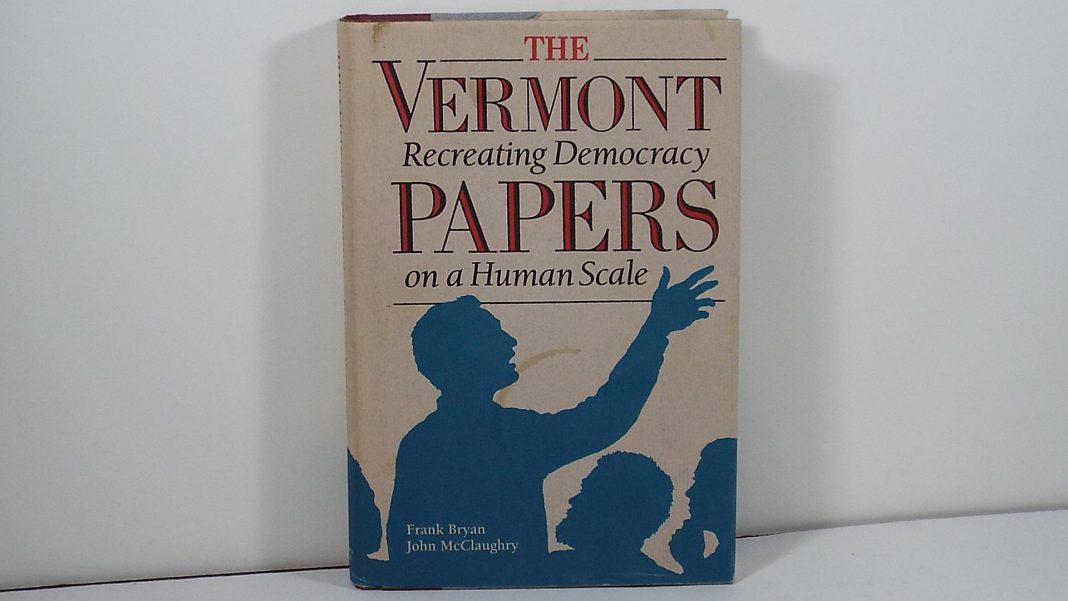 This essay was first published in the Rutland Sunday Herald/Times Argus on October 13, 2019. It is written by Frank Bryan and John McClaughry, who co-wrote Vermont Papers. Bryan is a retired professor. McClaughry works at the Ethan Allen Institute.

Thirty years ago this month, Chelsea Green Press in White River Junction published our book, The Vermont Papers: Recreating Democracy on a Human Scale. We dedicated it to “the memory of Ethan Allen and all those hardscrabble Vermonters who, in his tradition, and through their cussedness and liberal vision, have worked to preserve real democracy in Vermont for over 200 years.”

Our thesis was original. Like many others, we cherished the Vermont tradition of liberty, spelled out so beautifully in our 1777 Constitution, and of democracy, originating with our town meetings brought here by our earliest New England settlers. But we took the argument further. We said that Vermont of 1989 had “leapfrogged America’s urban-industrial period and landed smack in the Information Age … Vermont is still a governable place … Vermont matters most because it is small, not in spite of it.”

“For Vermont, with its tiny state capital, with its town meetings, its citizen Legislature, its two-year term for governor, has preserved the institutions and traditions of liberty and community … and has a rare opportunity to breathe new life into its democracy, (and in doing so) demonstrate how the rest of America might learn to recreate its own.”

We took a long look at how Vermont was governed. Then, and now, there are nine incorporated cities and 237 towns. Beginning in 1965, when welfare was taken away from town overseers of the poor and lodged in a state agency, the Legislature has steadily removed functions from the town level to the state level.

In addition, the state was beset by planners, frequently recent imports, who believed central planning was essential to keep ordinary people from ruining the dream of making Vermont The Perfect Little State. Gov. Madeleine Kunin won the support of these Pretty People, as we called them, by promising in 1987 to bring Vermonters into a “new planning era,” where nothing of any consequence happens unless provided for in the plan — “uniform in standard, specific in requirements and tough on delinquents.” (Act 200).

The Grand Solution was — what else? — centralization, of a little state that, by some political science assessments, was the least centralized state in the union. These enthusiasts had a clear idea who would be in charge of the vastly amplified state — their own better-educated, more experienced and more high-minded selves — certainly not ordinary, short-sighted, bumbling Vermonters who would be their subjects. The freemen and women who would, paraphrasing Ethan Allen’s rallying cry, “confound and rebuke the forces of centralism,” were disorganized and seriously overrun.

We saw that merely restoring most state functions of 1989 back to the towns was no longer possible. Our solution was to revitalize Vermont democracy by creating full-blooded local units of government close to the people, yet large enough to muster the competence and resources to bring back much of what the state had taken away from them, and govern democratically according to the traditions, wishes and genius of their communities.

To us, “local” should mean more than little squares and diamonds laid out in a wilderness by 18th-century surveyors. Rather, it would include some 40 cohesive larger units that we called by an old English name, shires. (These would replace the 14 counties that now exist but have no social coherence and little, if any, power.) In our view, a typical shire would have a shire moot, a citizen assembly like Brattleboro’s representative town meeting. Its elected members would choose a shire council, that would supervise the civic affairs of the shire through a shire manager.

The state would continue to manage certain large-scale functions, like major highways, air and water pollution, the legal system, federal-state relations, and the protection of civil rights and liberties. The shire would be responsible for all of the functions of municipalities not retained at the state level, especially the “people functions” such as education, health and welfare. Shire finances would be built on tax-base equalization from the state level, like the Canadian revenue sharing system in effect since 1957.

We placed a lot of emphasis on promoting what might be called “Shire identity,” or indeed, patriotism. Each shire would have its flag, public ceremonies, athletic teams, resource exchanges, charities and even its militia (most likely a volunteer fire and medical unit.) We hoped people would come to give their allegiance to the shire as their primary community, even though a shire moot could always create sub-units to deal with even more local concerns.

The final third of the book was devoted to recreating at the shire level programs for human services, education, agriculture and land-use management. Even 30 years afterwards, we are confident students of public policy will still find many useful proposals and real-world examples in those pages.

The Vermont Papers was well received. Senator and former Oregon Gov. Mark Hatfield wrote “this thoughtful and challenging book ought to be read by all those who have a stake in our government — all the citizens of this country.” On the right, National Review’s Joe Sobran and, on the left, The Nation’s Kirkpatrick Sale had kind words. The Boston Globe’s reviewer said “The Vermont Papers is one of the most original political economic analyses ever written about New England.”

Even former Gov. Philip Hoff, the epitome of an arch-centralizer, was kind enough to say he would “like to make this book required reading by Vermonters.” And socialist Mayor Bernie Sanders of Burlington said he “highly recommended this book,” because “we need radical new ideas if we are going to retain in Vermont the spirit of democracy and citizen participation that many of us treasure.” (When one of us, in the State House cafeteria, went up to the mayor and said “thanks for writing the blurb for our book,” Sanders grunted “didn’t do it for you. Did it for Frank.”) Perhaps the funniest observation came from a Dartmouth professor, who observed “the authors’ map of the shires looked like a phrenologist’s map of the head.”

Kind words aside, the real question was, did The Vermont Papers gain enough traction to influence events in Vermont? The answer is no. The centralizers marched bravely on down their shining path, and the champions of the “local,” historically suspicious of any entity above the town level as pernicious regionalization, did not flock to our banner.

So where has Vermont gone since 1989? Under both Republican and Democratic governors, the state has steadily assumed more control of Vermonters’ lives, and notably caused more fragmentation of governance beneath the state level. Waste management became a regional district function in 1987. Act 60 of 1997 made public education a state function, and Act 46 of 2015 crowned a hundred years of efforts by educrats to create unified school districts beyond the control of local voters, taxpayers and parents. These unified mega-districts are doomed to be controlled by the Agency of Education, its superintendent commissars and, of course, the teachers’ union.

The centralized public welfare system, created in 1965, has solidified its grasp of “the poor.” That’s because its regional administrators must conform to exhaustive federal requirements, and can find no time or space to mobilize local communities in support of aiding their poor to move up to better things. Green Mountain Care — the remnant of the failed single-payer system that Governor Shumlin abandoned in 2014 — is converting itself into “All Payer,” whereby one giant Accountable Care Organization gradually controls the finances and services of all the health-care providers, shuts down the inefficient ones, and rations care to stay within its state-determined budget.

The state Legislature, long one of the nation’s most citizen-responsive, is also changing, and not for the better. Unlike earlier days, when party lines were far more fluid, legislators of the current majority party in the House are dragooned into casting votes for the “leadership” position, or else cast into the outer darkness (along with the minority). Last year, the Ethan Allen Institute identified 42 registered lobbyists for environmental and “climate change” legislation, not counting those for whom that issue was a secondary interest. By contrast, aside from a few representing heating and motor fuel interests, there is no lobbyist for the interests of ordinary Vermonters who will ultimately have to pay for those ambitious “climate change” schemes.

And finally, the cherished Vermont town meeting tradition, our claim to democracy, is under serious pressure. More and more towns are switching to Australian ballot. Of the towns that retain meetings, more and more of the town business is strait-jacketed by federal and state requirements, and conditions on federal and state funds. With school meetings taken away to unified districts built on the waste management district model that few besides self-interested parties are likely to attend, town meetings will shrink down to electing town officers (mostly uncontested), managing town roads, deciding occasional capital investments and renewing acquaintances.

Alas, despite the hopeful subtitle of The Vermont Papers, Vermont has not been “recreating democracy on a human scale.” To the contrary, we are moving toward a plebiscitarian democracy of annual or biennial visits to the Australian Ballot Box, polls open from 10 to 7.

All in all, mark The Vermont Papers down as a brave if idealistic attempt to chart the beginning of a campaign to preserve and refresh liberty, community and democracy in the one small state best suited for such a revival. But now the times are changing in the direction of decentralism and democracy. The “assembly line” mentality of urban industrialism has been replaced by the “personal computer” mentality of post industrialism. “State of the art” information is as available to a citizen sitting in a town meeting in the smallest of Vermont towns, as it is to a member of the United States Senate in Washington, D.C.

Wrote the one reviewer on Amazon.com: “I am in the middle of re-reading this prescient book after having found a new old-stock copy. This should be required reading for any high school civics class — if there are still civics classes.” (5 Stars)