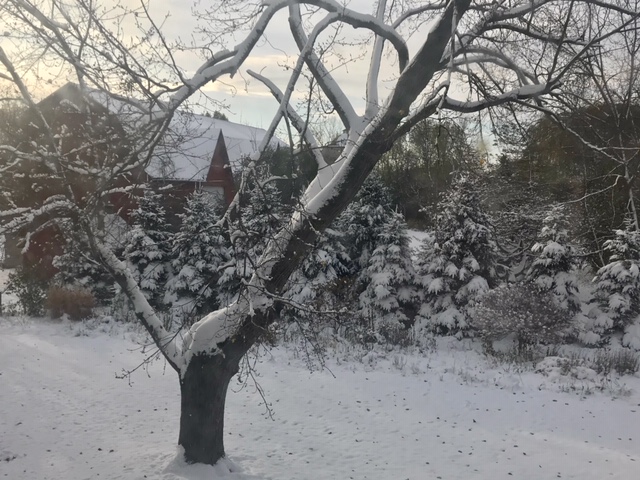 This year an unexpected autumn snow blanketed our farm.  In the days that followed, single-digit temperatures secured its place in the landscape, and another, lighter snowfall would later strengthen winter’s claim on our little patch of earth.

There was some resistance to the sudden change of seasons. The granite slabs leading from the back door to the chicken coop and barn stood defiantly against the snow and formed an archipelago in a sea of crisp white.  A round of robins gathered in the flowering crabapple trees on the north side of the house, sharing a meal of berries before presumably heading to a warmer clime. It is hard to look more bewildered than a robin redbreast in the snow.

Our hens announced their disapproval with shrill notes of surprise after charging out of their coop in the morning and finding the ground cold and unfamiliar.  They jumped, flapping loudly, some fleeing to a roost off the ground, others ducking back into the coop or under it, while the rest attacked their feeder, taking advantage of the confusion by stealing an extra mouthful before the flock’s pecking order was restored.

An early burst of snow and cold hides the vegetable garden, only half put to bed.  It extinguishes hopes of planting a few more spring bulbs or dividing old flower beds. Other unfinished projects aggressively seek recognition—a strip of brambles with their thorns and weeds with their burrs reach up through the snow and grip the coat or trouser as you pass by, reminding you that they remain, even though you had hoped to plow them under.

And yet, in the face of these frustrated efforts there is consolation, in part because a snow-covered farm is itself beautiful, but also because the beauty of agricultural pursuits is only fully appreciated after their limitations are understood.  All too often the best laid schemes “gang aft agley,” as the Ploughman Poet explains, but these mistakes and imperfections are part of an indissoluble whole.

In part, this means that it is hard to say whether the delightful order of a tulip bed planted with alternating pink and red blooms is more pleasing than a hastily planted section of Virginia Bluebells that has naturalized and expands each year.  The most beautiful parts of our gardens started out as unfinished projects or emerged only after nature was left to its own devices.

That the cultivation of the earth demands humility is appropriate; after all, the Latin root of the word is humus, meaning soil.

Immanuel Kant, in his Critique of Judgment, casually provides seashells, musical fantasies, wall paper, and architectural ornamentation as examples of “pure beauty.”  If Kant had lived on a hobby farm, perhaps he would have listed oblong eggs, volunteer tomatoes, and ungainly blackberry bushes instead.

Although he missed that opportunity, Kant was able to clearly define the moral dimension of aesthetic judgment.  If the pleasure we take in beauty is subjective, Kant says, it isn’t subjective the way that sensory pleasure is subjective.  You like your apples in a pie, I like mine in a hard cider.  That is personal preference.

But when we speak of beauty, we desire universal agreement. Kant argues that this is because aesthetic judgments are not burdened by a desire that that can be quenched or an interest that can be resolved. Aesthetic pleasure is disinterested and not tied to an object but to our state of mind.  Kant describes this as “the free play of imagination and the understanding.” It is “free play” because it is unsullied by desire or interest.  That freedom provides a common ground of judgment.

I can’t prove that my snow-covered farmette is beautiful because the issue isn’t my actual home, but the state of mind it produces in me.  And while I know this is true, within me exists the urge to somehow share that experience of beauty with others. Kant claims that we seek the agreement of others in such judgements of beauty because while they are in one sense subjective, they also tap into our common humanity.  The freedom and universality that aesthetic experience convey is therefore not only an individual experience; it is also a reminder that we are moral beings.

Perhaps it is Robert Burns again, in “To a Mountain Daisy,” written after he destroyed a wildflower with his plow, who best relays why the end of the growing season causes us to contemplate things like beauty, mortality, and our common humanity,

Ev’n thou who mourn’st the Daisy’s fate,
That fate is thine—no distant date;
Stern Ruin’s ploughshare drives elate,
Full on thy bloom,
Till crush’d beneath the furrow’s weight
Shall be thy doom.

We do share that ultimate end, but before that inevitability we are moral beings who love and cultivate imperfect things imperfectly.  Thus, it is how we use the occasional early snowfall that makes all the difference.