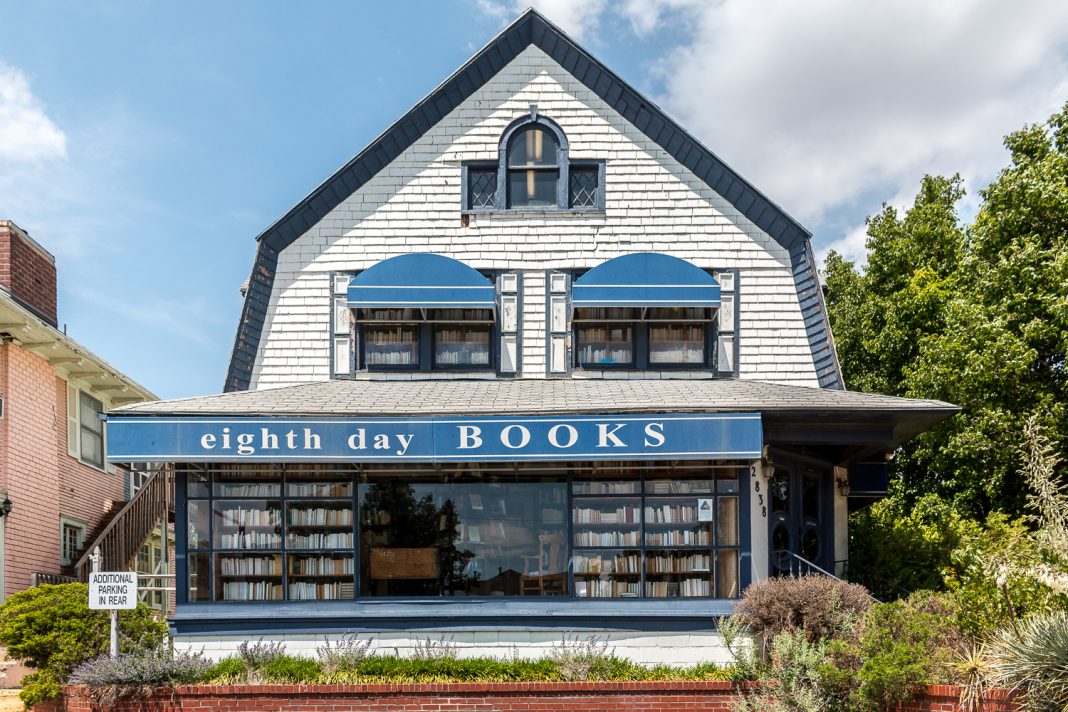 Wichita, KS. My city of Wichita, KS, like so many other cities across the United States (and around the world), is busy engaging in a prolonged act of triage. Our county–after resisting for a time, before caving to reality–issued a stay-at-home order this week, and depending on how the coronavirus pandemic spreads, more stringent orders are almost certainly on their way, from our state government if not the local one. Now, with most businesses having closed their doors–joining libraries, schools, universities, and other public buildings–the question becomes the classic one which arises in every emergency, every instance of limited resources: what can be sustained, what can be changed, and what can’t be saved?

Every city dweller has their favorite spots, of course, we here in Wichita have a couple of websites we can follow closely, getting the latest information about what restaurants, coffee shops, delis, and retail outlets have online ordering, which ones have curbside pick-up, and which have simply closed for the duration. How well online patronage will help any–unfortunately, almost certainly not all–of these locales remain in operation over the weeks (and perhaps months) to come remains to be seen.

As much as I worry about my favorite Korean market, my reliable bagel breakfast cafe, or the local ice cream shop, though, I worry even more about the social spaces these businesses created. You don’t have to be an devotee of urban sociology or civic republican theory to recognize the immense value of “third places“–those locations where one is not at work, nor at home, but rather in an open-ended (while still closely defined) arena of connection and interaction. We’re talking about the YMCA, or the public library, or community centers–all of which, of course, have needed to close down to prevent people congregating and spreading the virus further. Places of commerce do this too–not all of them, and not all equally well, but some specialize in it. Indeed, for some the fact that they can provide a space for young and old, rich and poor, regulars and newbies, like-minded folk and trouble-makers, all to occupy a particular place and observe, listen to, laugh with, and learn from other actual flesh-and-blood human beings is exactly their business model. There are many establishments which may advertise this–but none embody it as well as bookstores (as the readers of Front Porch Republic, at least, should be very well aware).

Watermark Books & Cafe (full disclosure: my wife worked there for over eight years) has had to cancel all its book clubs, reading groups, and story times. Sarah Bagby and her management staff have had to let their booksellers go, and close their doors, which has been a terrible loss for Wichita’s east-side College Hill neighborhood–to say nothing of the innumerable elementary and middle schools which Watermark regularly brought authors out to–which the store has become so entwined with over the years. Eighth Day Books, the tiny linchpin of a sprawling spiritual community (the Eighth Day Institute, of which I am a member) that connects churches and faith groups throughout the whole region, is focusing on online and phone orders, as EDI’s regular gatherings have had to be suspended, and access to the store limited, with the small, devoted staff of Eighth Day hunkering down to weather the storm. And Prairie Dog Comics, home of some of the best RPG game nights anywhere in the state (and where I buy my daughters copies of Ms. Marvel), has had to pack up its tables and end its evenings of gaming, restricting itself to fulfilling phone and online orders, and only allowing browsers into the store on a strict reservation basis. All of this, and more, doesn’t just threaten businesses–it threatens a by-product of commerce which is far more important that the commercial transactions themselves: namely, people getting together and sharing their literary passions, their spiritual insights, their geeky delights, with those in the same space.

In the larger sense, of course, cities have always been about the civic and commercial creation of such spaces. The reigning ideal of urban life, after all, is to live in a place where complex social connections could co-exist with what an old professor of mine once called “the private heterogeneity of anonymity“–that is, a place where we are sufficiently private to each other so as to allow all sorts of original communal, even unexpected associations to emerge, without the burden of the past traditions, prejudices, or authority. (This would be in contrast, he suggested, to “the public heterogeneity of familiarity,” the much more limited but perhaps also better known and more loved variety of connections which emerge in the hypothetical rural village because everyone knows everyone else’s idiosyncrasies so well.) That particular urban ideal is rarely achieved, obviously–and considering the importance of traditions to constituting just who we are, making the promise of anonymous opportunities for communal connection into an idol is plainly wrong-headed. The peculiar freedom of interdependent anonymity is by no means a perfect good. Still, its appeal is undeniable all the same. (Die Stadtluft macht frei hasn’t endured for centuries as a proverb for nothing!)

Recently Michelle Goldberg, a New York Times columnist, mourned seeing the people of New York City forced to isolate themselves. “Historically, cities have made it easier for people to live alone without experiencing constant loneliness,” she wrote, noting that choosing to live in a city is “to depend on interdependence.” To be isolated from one another, and in particular from those third places where the rich possibilities of community are most regularly realized–as they were and, God willing, still will be, at Watermark, Eighth Day, and Prairie Dog here in Wichita–strains urban interdependence as nothing else.

In some ways, a mid-sized regional city like my own might be better able to handle such a strain than many other, larger cities–which, unsurprisingly, is where coronavirus outbreaks have been most severe. Wichita dominates, but does not encapsulate, its rural surroundings; as such, it is at least theoretically possible for us to achieve Wendell Berry’s definition of urban sustainability–“a city in balance with its countryside”–in a way that NYC never could. More immediately, in this time of pandemic panic, we have a city where there is still plenty of space for the recommended (or mandated) isolation to take somewhat fulfilling–or at least less cramped–forms. Goldberg quoted a psychologist who observed how the varying impact of quarantine and the closure of beloved spaces depends much upon where you live; the loss of socially enriching spaces will be felt differently “if you’re able to stroll around your farm and pick the produce you’ve been growing,” in contrast to those who are “living in a one-bedroom apartment with three roommates” whom they nonetheless are supposed to keep themselves separated from. While obviously not every mid-sized city resident can easily get out to nearby farms to pick up fresh produce or meat from local butchers and producers, the obstacles to doing so in such places–or to even having immediate access to such resources on one’s own property–are far smaller than they are to residents of larger, more cosmopolitan agglomerations.

But at the same time, the residents of a city like mine, perhaps exactly because common places of complex interaction and community feeling are spread far apart and are relatively few in number (not to mention too easily bought out and torn down by local financial players), may find it, when a civic crisis arrives, that much easier to retreat to private locales, set aside public concerns, and forget about the ways in which a city could be made more resilient. In particular, cities like Wichita, centering as they do rural environments, have over the past century mostly just spread out, with little organic duplication and what little public investment exists having usually (and, as is now obvious to us urbanites obliged to endure one-size-fits-all quarantines, dangerously) entrenched a few central nodes within the city. This means, of course, that the prospect of making distinct neighborhoods more sustainable–whether via alternative transportation systems, divers and localized food networks, and other strategies for keeping cities’ cultural and commercial connections functioning–are politically that much less likely. We saw this, perhaps, in our county commission’s initial reluctance to face the questions of triage which this pandemic is making unavoidable. From what I hear from friends of mine across the United States, perhaps in your county seat or regional city, you’re seeing it too.

Whether you’re seeing it or not–but especially if you are–it seems to me that the task of every urban dweller at the present moment is to engage in whatever kind of triage our limited time and dollars allow, and to deliver them in whatever ways we can to help keep these wonderful third places alive, until the community connections they enable are able to fully bless our cities once again. Goldberg ended her column with a wistful hope: “Maybe when this ends, people will pour into their restaurants and bars like a war’s been won, and cities will flourish as people rush to rebuild their ruined social architecture.” Maybe. But that requires creating lines of support for that architecture in the meantime, so that all those the restaurants and bars–and, most crucially, all those bookstores, including three dear to my heart here in Wichita–will still be there, waiting for us to fill those third places with urban energy in a post-pandemic world.

When I talked this week with Warren Farha, the owner of Eighth Day Books, he expressed his determination to find a way through this challenge, and get to the other side. People–maybe not all the people, all the time, but enough of them, often enough–want and need to come into a place they know, among people they know, looking for the books and art and insight they know they will love, if they can only find it. “You can’t replace all that with online shopping; the door has got to be open so that people can come in and be part of something larger than themselves.” Maybe they’re not going to be able to come in for a time, he admits–but that just means their desire will be all the greater afterwards. No single city has an obvious blueprint of how to get from today’s closures to that “afterwards” celebration, whether tomorrow, or next month, or next year; New York City doesn’t, and neither does Wichita. My city here, just like yours, will have some advantages along the hard path before it, and some disadvantages too. One hopes that we’ll learn from this experience, and maximize the advantages in the future, and minimize the disadvantages, with cities both less expansive (to allow for more rural outlets) and less centralized (to allow for more neighborhood adaptability). But whether we learn those lessons or not, we ought to give thought to whatever lines of support are needed right now. Our common spaces, our third places, depend upon it.

My Mask, My Choice