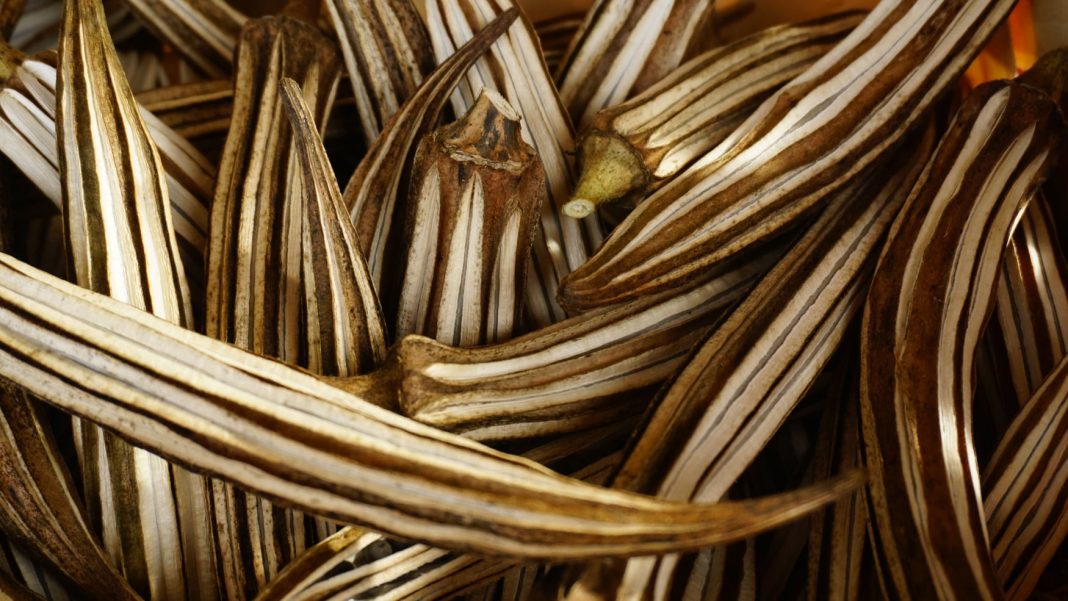 Buncombe County, NC. Chris Smith considered titling his 2019 book “In Defense of Okra.” Instead, he opted for The Whole Okra: A Seed to Stem Celebration (Chelsea Green Publishing, 2019). His book’s selection as a 2020 James Beard Award Winner indicates that his choice for the title was one of several excellent choices that Smith made. After growing okra last year in the Mars Hill University Heritage Garden and reading Smith’s book, I am ready to join the okra-bration; frankly, I am now embarrassed to have been among those who dismissed a plant with so many merits. In the space of a single growing season, I went from doubter to defender. I offer here three characteristics that contributed to my conversion.

Okra plants are striking. A sturdy stem stretches skyward and supports broad leaves. While the plant itself is large, even imposing (some varieties grow twelve or more feet tall!), the flowers are delicate and ephemeral. Elegant blooms appear for a single day before being replaced.

Such contrast between frame and features gives okra an interesting appearance. Okra has the dimensions of a corn plant but blooms as eye-catching as a zucchini blossom. A sports analogy is out of place here, but I like to think of okra as the beautiful linebackers of the garden. And I daresay that the visuals they produce would enable them to hold their own if planted outside the garden among the landscaping.

The COVID-19 pandemic has prompted many people to turn more of their attention toward their homes and yards. I have watched with delight as many new gardens have gone in this spring. I doubt okra tops many people’s list of garden must-haves, which is a shame since it is such a determined grower. Gardens are only guaranteed to produce one thing year in and year out: humility. Seeing frost erase our best laid plans overnight and watching as flood, drought, and pestilence drag down our plants is always deflating. Okra offers a buoying presence. Chris Smith writes,

Consider my average summer garden: There’s blight on my tomatoes, Mexican bean beetles are hammering my pole beans . . . , squash bugs have overrun the melons . . . , and striped cucumber beetles won’t even let the cucumbers get past Go. Vine borers have toppled my fall pumpkins and are having a good go at my ‘resistant’ butternuts. The heat has forced every annual green to bolt, downy mildew has browned my basil, and cabbageworms are greedily working their way through collards, kale, and any other brassica crop I was foolish enough to plant. But the okra keeps on growing.” (20)

Almost everyone thinks first of tomatoes, and that’s reasonable: in terms of taste, homegrown tomatoes are several degrees of magnitude better than their supermarket kin. But tomatoes can be fickle and delicate, especially the tastier heirloom varieties. Why not plant some okra, too? One of the perennial complaints about okra is that it is “just too productive.” That particular characteristic means that it might have the power to redeem an otherwise frustrating or lackluster season in the garden.

Chris Smith takes his subtitle—A Seed to Stem Celebration—very seriously. His book includes nutritional information about okra sprouts and okra greens, dozens of recipes for the pods, as well as instructions for milling one’s own okra-seed flour. He explains that one can also press the seeds for oil, eat the flowers in several different ways, and that it’s possible to create paper from the fibers that make up the okra stem.

I only dabbled in okra last year. I ate the pods in several different ways—raw, pickled, and grilled—and made several batches of okra-seed-flour pancakes.

The seeds I saved from last year’s crop germinated early last month. This year I have a patch at home in addition to what we are growing at the MHU Heritage Garden. I have a plan for the okra at my house that embraces its versatility and vigor:

Of course forming and publishing these plans has surely jinxed my okra . . .