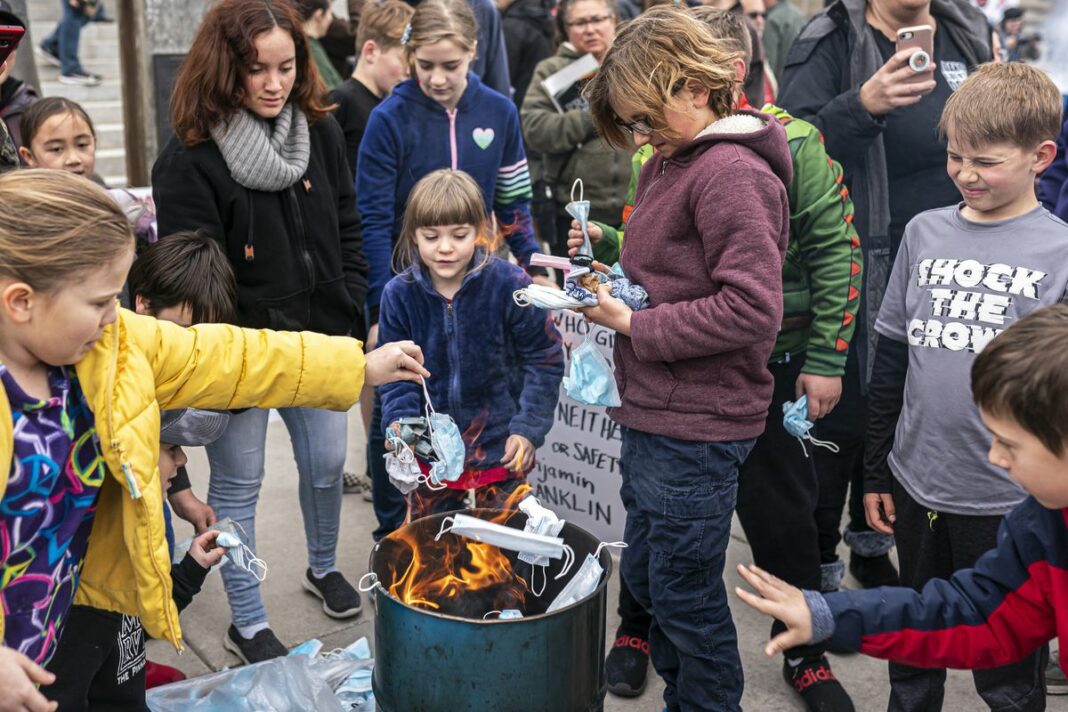 Boise, ID. One mantra of those who favor abortion rights is “My Body, My Choice.” As the team at Choice42 winsomely argue, a more appropriate catchphrase would be “Our Bodies, My Choice.” Abortion is often about a stronger body unwilling to be inconvenienced by a smaller, weaker one. The pro-life movement, however, has traditionally been about expanding the circle of care—even legally mandated care—to the vulnerable. That is why I have been perplexed to see a sizable slice of the pro-life movement embrace anti-mask rhetoric.

Here in Boise, a crowd of 150 or so recently gathered on the steps of the Idaho State Capitol to protest the pandemic response. Videos of the event prominently featuring children burning face masks have, pardon the pun, gone viral, even garnering international coverage. I first learned about the then-upcoming event from a fellow participant at a pro-life prayer vigil outside of a Planned Parenthood abortion clinic. Soon thereafter, I attended a screening of the worthwhile film Gosnell. Masks were available but overwhelmingly shunned. The venue was spacious and the crowd relatively small; nevertheless, the fact that those gathered would take to the streets to encourage reluctant mothers to embrace the sizable inconvenience of pregnancy, while not taking on the minor inconvenience of a mask for the sake of one another seemed dissonant.

Certainly, there are some costs associated with masks. Most of us miss seeing smiles and laughing heartily in public without concern. Thankfully, a bit like pregnancy, this discomfort is but for a season, and the season will be shorter the more links in the potential transmission chain we can break before new virus variants emerge.

Of course, unlike pregnancy, the dependency of another human life on our actions is not as direct nor as outwardly visible. Even so, the analogy of pregnancy to public health measures is still sound. The focus of the pro-life movement has never been about making a woman bear her responsibilities alone. Instead, much energy has gone to building webs of support for babies, mothers, and fathers. To the woman facing a crisis pregnancy, most pro-lifers do not shout “It’s all on you, and one day we will use the courts to make you do what you should!” Rather the message has been “We believe unborn babies should be protected by law, but we as a community are here to help.” Recent cries of oppression-by-mask run counter to these communal sentiments.

As Paul exhorted the Galatians, “Carry each other’s burdens, and in this way you will fulfill the law of Christ.” One of the central, if shocking, teachings of Jesus was that when an authoritarian government unjustly requires an onerous burden, his followers should respond by going an extra mile. And a mask is by no means the equivalent of a Roman soldier’s pack.

In his masterpiece The Divine Conspiracy, Dallas Willard highlights “the primacy of anger in the order of evil” as the opening theme in the Sermon on the Mount. Today, there are legitimate questions in the air about public spending in the trillions, lockdowns, school closures, vaccines, and more. Unfortunately, much of what is currently driving the discussion is not reason nor compassion but anger. Willard’s conclusion that “there is nothing that can be done with anger that cannot be done better without it” is very much a needed word for our moment.

In January of 2020, who would have thought that a simple mask would become a cultural fault line? Flawed exhortations early in the pandemic from Surgeon General Jerome Adams and Dr. Anthony Fauci to not wear masks certainly set the stage. It is also worth remembering that Tucker Carlson of Fox News was among those advocating for mask wearing. “Of course masks work! Everyone knows that. Dozens of research papers have proved it,” Carlson exclaimed in March of 2020. He also pointed to the central role masks played in the effective pandemic responses of South Korea and Japan. By October, however, Carlson was mocking masks as “holy amulets” of a cultist left.

I lived for three years in South Korea, a country where the culturally expected response to having a cold was wearing a mask to protect others. As reported by Johns Hopkins, Korea has only suffered 3.18 COVID deaths per 100,000 of its population. Other densely populated mask-wearing cultures such as Japan (6.52/100,000), Singapore (0.51/100,000), and Taiwan (0.04/100,000) show similar or superior results. By comparison, the United States has suffered 160.48 deaths per 100,000. Had the United States achieved South Korea’s success, our national death total would be around 10,500 rather than 525,000. Taiwan’s impressive rate would have meant only about 130 dead Americans so far. More than masks were involved, but many public health officials believe face coverings play an important role.

On the same day that masks were defiantly burned in Boise, the illustrated story of Agnes Boisvert was published by NPR. Boisvert is a nurse in Boise who struggles with the reality of COVID in the ICU and the anti-mask sentiment outside of it:

You can’t constantly see person after person after person becoming so oxygen hungry and just withering away in front of you—gasping for air—before you just, you lose a piece of yourself. And then we go out in the general public and people are like, “I can’t breathe with a mask on.” And, it is like—that is BS. Because I know what it looks like when you can’t breathe. And you are perfectly fine.

Those who value life should listen. I wear a mask because I am pro-life. Especially when on the sidewalk by Planned Parenthood, I do not want to give a pro-choice person the ability to easily dismiss me as a hypocrite. The past mistakes and overstatements from leaders and pundits alike were unfortunate and confusing, but they do not require conservative Christians to respond by just becoming one more cog in the rage and resentment machine that dominates public life today. I do not doubt that those who refuse to wear masks can still care about the unborn, but an embrace of hyper-individualism and bra (sorry, mask) burning run counter to the values that undergird the pro-life movement.