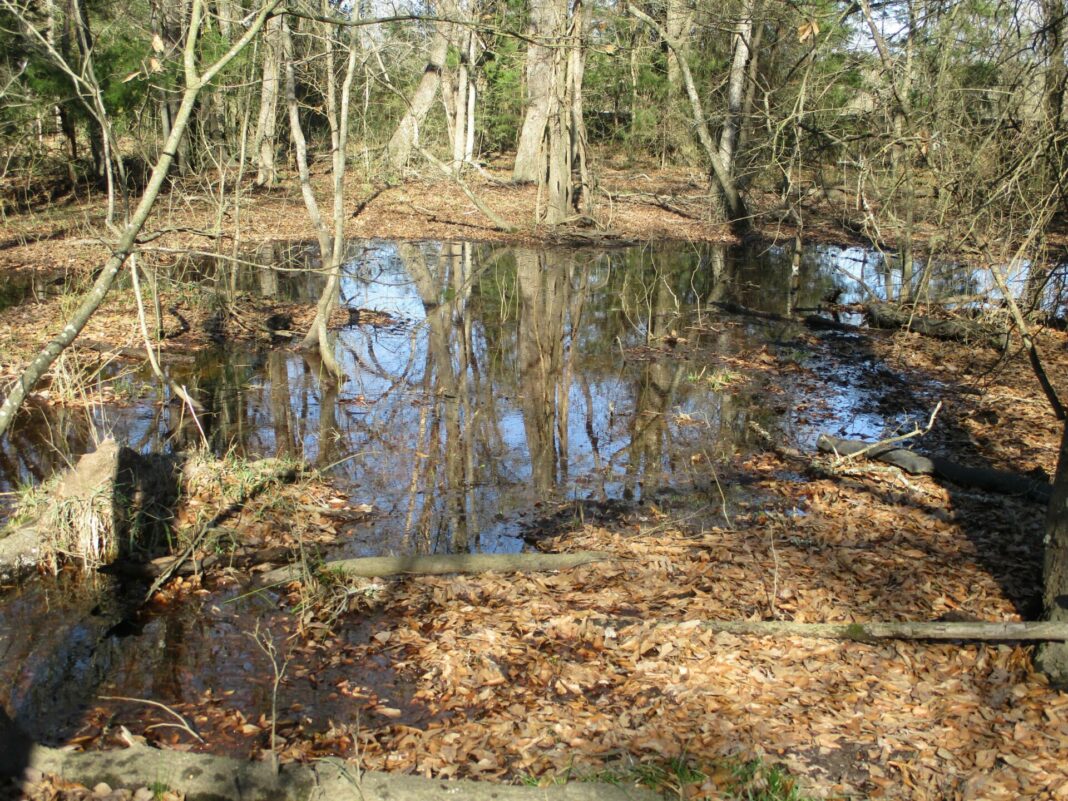 Waco, TX. In late December of 2019, my family and I purchased a 60-acre ranch in southern Limestone County, Texas, roughly 50 miles east of our home in Waco. Even before I grew up in West Tennessee, my family always owned land; it was a way of life. My mother’s father ran the first cattle operation (on his DX Ranch) in Henry County, Tennessee that had electrification. Now as a transplanted Texan, my acquiring this land felt like a reclaiming of that legacy. We’d previously owned 2.5 acres out in Crawford, Texas, near the George W. Bush ranch, but after we realized we wouldn’t build out there in that rocky terrain so far from Waco, we sold that lot.

Corrymeela has a rolling terrain with a slough and tank (Central Texan-speak for “pond”) at the front and considerable swamps in the back headed toward Lake Limestone. Most of the land I had looked at in McLennan County, closer to Waco, had either been out of my price range ($5000/acre on up) or was simply cow pastures with no or little water and heavy mesquite cover. Mesquite requires extensive work to remove from the landscape since they propagate underground. Once I widened my circle into Limestone County from Waco, intriguing properties started popping up, and while I walked Corrymeela in late November, 2019 with my realtor friend, I was hooked.

After much searching of other ranch names in Texas (Triple R, Rockin’ R, etc., were all taken), we settled on “Corrymeela” for the ranch name. It’s located a few miles from Old Union, Texas, which is only a gas station and a nearby barbeque restaurant run by a new friend, who delights in calling himself a “full-blooded Czech.” But it’s really in the middle of nowhere, down a county road roughly a mile from Lake Limestone.

Once you leave the open space in and around the tank and slough—which itself looks across to a small lake on the adjoining property of some 64 acres—you take a dirt road up a hill and down into the bottomland and swamps. That road—that tunnel of green that must have reminded me vaguely of Mississippi writer Eudora Welty’s fictional Natchez Trace—sold me on the place. Once down the road, you’re surrounded by greenness, cut off from everything, and as you descend the big hill, you feel a definite breeze, perhaps off Lake Limestone. Down in the bottomland in late winter of 2020, my original bulldozer man who incompetently piled too much dirt into the brushpiles he made while clearing found a deep creek. I hadn’t been even able to walk that section of my land yet since the vines, thorns, and yaupon and cedar were so thick. When I did, I found it was a “live-water” creek, spring-fed. Even during our usual run of 100 degree-plus days last summer, it never ran dry, and we think it drains my land until running finally into Lake Limestone. So there’s live water in the back along with those swamps from which I harvested a wood duck late in the season early in 2020.

Corrymeela is Irish Gaelic and has three possible meanings: “Hill of Harmony,” Hill of Honeysuckle, and “Lumpy Crossroads.” While there is no honeysuckle on my land, there is a significant hill, and the ground can be rather lumpy. I had previously spent part of a summer at the Corrymeela community in Northern Ireland, a place of reconciliation for Catholics and Protestants seeking comity during and after the long years of conflict in that part of the world. Corrymeela has been a place for hard and difficult (“lumpy”) conversations leavened with honesty and hope, and I wish for those conversations leading toward harmony at my ranch as well.

My Corrymeela lies in the Post Oak Savannah, a remnant of an ancient oak belt that formerly ran from near the Canadian border down nearly to the Gulf of Mexico. There are only scattered pockets of this ecological zone left—a number of them in Central and East Texas. The Post Oak is an intermediate zone between the Blackland Prairie of Central Texas and the Piney Woods of East Texas. Water oaks, blackjack and bluejack oaks, post oaks, and persimmon trees feature prominently in this zone, along with, unfortunately, yaupon hollies, and Eastern red cedars. The land is characterized by a sandy soil that locals call “sure ‘nough sugar sand.” In the summer of 2020, during the lockdown, a five-gallon bucket of my sugar sand sufficiently broke up the blackland clay and provided some fertile soil for my crop of tomatoes back in Waco.

After we bought the land, we were immediately faced with several issues: How to maintain access down a sand driveway; how to remove the invasive yaupon hollies and some Eastern red cedars (aka “fenceposts”); how to remove the feral hogs running wild on the place. After consulting with the USDA, Texas Parks and Wildlife, and the local extension agent, I slowly worked up a wildlife management plan that would not only maintain my tax exemption but also provide more habitat for native species. My ultimate goal is the reintroduction of bobwhite quail. Last summer, my bulldozer man dug a huge quantity of clay out of my tank and laid it down the 800-foot driveway as a foundation for the road-base—some thirteen “belly-dumps” of it. Without the clay, the road-base would simply sink into the sand as so many other attempts at improving the driveway—especially the low spot across the slough—had done.

That slough! My truck got stuck or nearly stuck in it repeatedly in the late winter and spring months of 2020. Some former owner had attempted to build it up through applying local red bricks and even a great deal of computer hardware, including motherboards, and even glass bottles. I removed all this material painstakingly by hand, and my bulldozer man finally finished my driveway last August by filling that part of the slough with large local stone. One section of the slough now drains toward the tank.

Earlier that year, he had bulldozed all of the impenetrable thicket between my tank and the driveway. I now have an attractive open space across which the eye travels all the way to the tank; the tank is much deeper now and already attracting local wood-ducks and other waterfowl. That open space, one of the few in this thickly wooded acreage, is where I burn brush piles and where I shoot skeet with my sons and friends I host. Because of my fear of extensive soil damage, I hesitated to employ a bulldozer in this manner, but the tenacity of the yaupon hollies demanded it—and all the shredder operators I contacted admitted they could only shred the hollies to the ground, after which they would grow back! “What’s the point?”, I wondered repeatedly to myself. Native forbs and grasses are already starting to pop out just as the Texas Parks and Wildlife expert told me they would. The native seedbed had lain undisturbed for years while the hollies and cedars proliferated. So far, little bluestem is emerging, along with a large yucca on the dam wall of my tank. I hope to have the USDA do a controlled burn on some more undergrowth of hollies and cedars early this year.

I should say a word about those cedars. These are true cedars—tall, straight, often majestic—so different from the twisted, scraggly mountain junipers around Waco and McLennan County and down into the Hill Country. Still, these Eastern red cedars similarly suck 30-35 gallons of water a day out of the soil. By selectively cutting them, I hope to bring more water to the surface and perhaps have long-buried springs restart, as they have because of the extensive cedar clearing at places like Bamberger Ranch in the Hill Country. I have cut several ten-foot sections for fencepoles—three feet to bury, seven feet to stick up—and I may still swap some with a local friend who manages a feedstore in exchange for his trapping some of my wild hogs.

Feral hogs, for those who don’t know, have become one of our most invasive species in this country, and fully half of the estimated population of 8 million reside in Texas. They trample farmers’ crops, prey on other wildlife, and are generally a menace. Roughly a year and a half ago, wild hogs ate a woman in the pre-dawn darkness in East Texas as she arrived at an elderly couple’s house to care for them.

My son and I have peppered multiple hogs with buckshot, but I’m still not sure we’ve killed any. A friend of mine did kill one, a sow, in mid-December with his .308 after my 1891 Mauser refused to fire—a problem with the firing pin. As I told Alex, he likely saved me 15-20 new hogs/year with that shot! The sows have relatively short gestational periods and multiple litters of three to four piglets a year. The hogs definitely ate a great deal of my deer corn I put out in 2020, but so did some of the local whitetails.

I should say at this point that after hunting hard since November 7, my older son took a nice fat doe on January 17, 2021, twenty minutes before the season ended. He took the doe in an old-school way—with buckshot! After I blooded his cheeks and forehead, we turned our truck lights on along with our headlamps, and we got to work field-dressing the deer. Darkness quickly closed around us, and Connor started noticing pairs of yellow eyes at the treeline, which is really close to where he took the doe. So unnerved finally by these coyotes stealthily creeping up on us, we decided for one of us to cut open the cavity and remove the organs while the other one fired buckshot at the ‘yotes. Shaking with some fear and adrenaline, we finally decided to simply leave the organs on the ground instead of burying them, and we loaded the deer into my truck to take it to the processor. After a stop back in McLennan County for ice to pack in the doe’s body cavity, we drove back into Waco, across the Twin Bridges over Lake Waco, and to the processor. I decided to have his first deer dry-tanned, and we settled on summer sausage, some five pounds of venison jerky, steaks, deerburger, and backstrap. We’ve now some 30-40 pounds of venison to keep us in protein through the winter and spring, and my son has the satisfaction of having killed his own meat.

Corrymeela is a dreamscape, a landscape that I marvel at every time I go out there. If conservation consists of loving something—a tract of land, a garden, a wood—then my hope is to love this land even more intensely into its full God-created glory. In my middle age, I have begun imagining another life—outside of the university I love—that grows steadily within me. I am grateful beyond words.

When Innovation Runs Out: The Vindication of Maintenance

Meat in Due Season