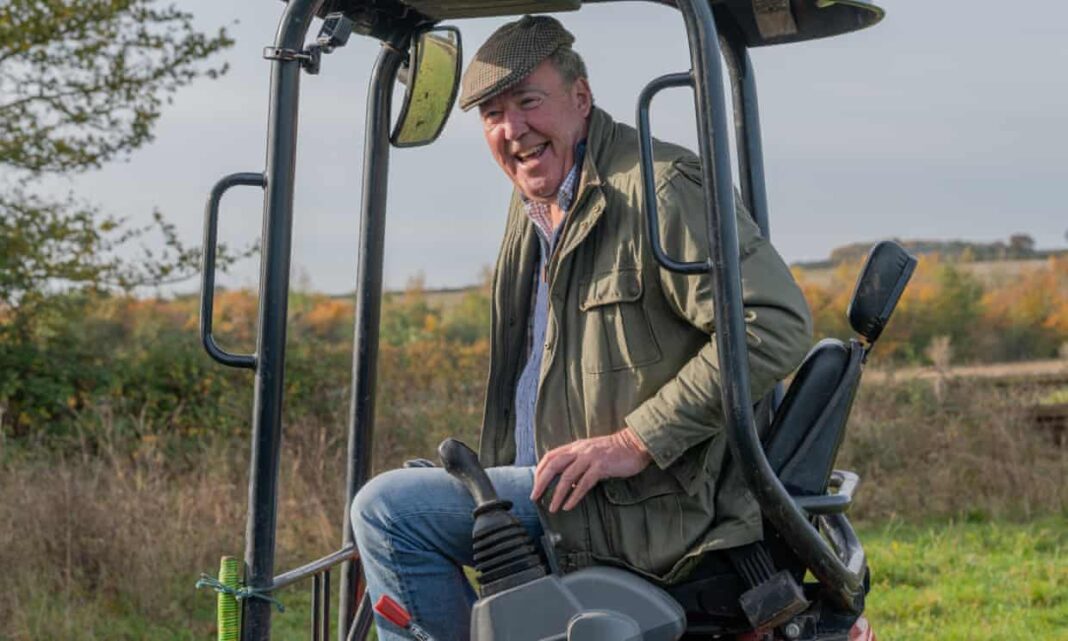 West Palm Beach, Florida. There’s a new show on Amazon Prime called Clarkson’s Farm. The main figure is Jeremy Clarkson, a former journalist now most famous as a motor enthusiast from Top Gear and The Grand Tour. Clarkson purchased a farm a few years ago, but hadn’t farmed it himself. He was just another landowner living in London with a love of exotic cars. As the post-World War I song asked, “How ya gonna keep them down on the farm, (after they’ve seen Paree?)” But after driving all over the world, Clarkson headed to the Cotswolds to work Diddly Squat farm himself (with help). The film crew follows him along for a year.

Clarkson’s Farm is a light-hearted look at Clarkson’s attempts to become a farmer. Full of self-deprecating humor and having limited natural instinct for the occupation, Clarkson has many adventures—purchasing farm equipment, planting and harvesting, raising sheep, dealing with weather and government regulations, and much more. Clarkson wisely enlists good help along the way. In the series we get a chance to meet his delightful and long-suffering team, including Charlie the land agent, Kaleb his co-laborer, and Lisa his girlfriend. Between the situations and the subjects, the show turns out to be quite funny, especially as Jeremy often learns the hard way why things are done as they are.

The show might easily have been called Clarkson’s Failures or Clarkson’s Folly. Jeremy learns how difficult it is to till the soil or run the combine or herd the sheep or protect the chickens or make a profit. Most of his attempts at innovation turn out to be mistakes. No one wants to buy his wasabi. No one is shy in voicing their doubts about his abilities. The town council is not very favorably disposed toward him (why should they be?). And as soon as he gets going with anything, the weather turns.

While there are many jokes—and Clarkson is definitely a dilettante farmer on his Diddly Squat farm—the show does not portray farming as a joke. Clarkson’s Farm highlights the expertise and effort required to do even the simplest things on the farm, from the high cost of buying seed and equipment to the range of knowledge needed to do well. And through it all … the weather. Season one of the series was filmed starting in 2019, a year with torrential and consequential rain across the UK. Especially in his conversations with the land agent, Clarkson’s questions manage to frame the many challenges faced by farmers in the UK. This series has nothing on the classic The Farmer’s Wife, but it gives viewers some sense of what it takes to run a functional, much less successful, farm and why domestic farming is both important and at risk.

Clarkson’s Farm is also interesting for its engagement with the physical environment. Clarkson is well-known for being neither an environmentalist nor for being very sensitive to others. His life on the farm does not seem to foster Jung’s “oceanic feeling” leading to some kind of oneness with the world around him. But his appreciation of the physical beauty of the Cotswolds does expand to include a better understanding of the challenges to the ecosystem. He talks some about the importance of bugs. He finds himself more attached to the sheep than he expected. He is proud of the trout he raises in his pond, even if they are slightly undersized. Clarkson is still not an expert on anything farming related at the end of season one, but he is learning all the time, including about the area where he lives and how to love it well.

Clarkson’s Farm is, in some ways, the story of a difficult man meeting a difficult job. The camera follows Clarkson getting up early, feeding the chickens, feeding the sheep, opening a farm shop, tilling the fields, and encountering all manner of expenses. The job is financially, physically, and emotionally demanding. He rarely makes life easier for the people around him. Kaleb should be getting paid well for all the grief he is taking. But, somewhat surprisingly, Clarkson loves the farm. By the end of the series, Clarkson realizes he has never been happier in his life. While Kaleb, a true farmer, wonders if Jeremy might be better off back in London, Clarkson realizes he isn’t ready to give it up. He has found something worth doing.

Clarkson’s Farm is not the story of a celebrity going to the country and becoming a better person, but, in its own way, it does emphasize the value of work. It has a taste of the ethic exemplified by the better parts of Teddy Roosevelt’s life. After the death of his first wife, Roosevelt went out to the Dakotas to be a cattle rancher. It was a physically challenging and financially costly experience, but one he found exciting and fulfilling. As he said in one of his most famous quotations: “Far and away the best prize that life offers is the chance to work hard at work worth doing.” Though Clarkson himself emphasizes that his ability to run the farm reflects his own personal wealth and the advantages that come from being followed by an Amazon film crew, his show nonetheless highlights the value of hard work and the sense of fulfillment that comes from it.

Jeremy Clarkson is no Wendell Berry, but there’s more substance to Clarkson’s Farm than the movie The Egg and I with Claudette Colbert and Fred MacMurray, which also involved some amateur farming. No doubt many people tuning into this show would not otherwise watch anything at all related to agriculture. Clarkson’s increasing consciousness is sometimes subtle, but that may make it more effective than the sentimentalism and crisis narratives offered by other approaches to documenting food production and farming. There is no doubt that Diddly Squat farm is sometimes creating too much traffic in the area of Chadlington and likely giving many local farmers some headaches, but it may also create some more awareness and appreciation for farming and the region. Hopefully other people in the area will also enjoy having some laughs at Clarkson’s expense; a second season has already been ordered.

Thoughts on Localism and Resilience

Feeding Pigs and Solving for Pattern