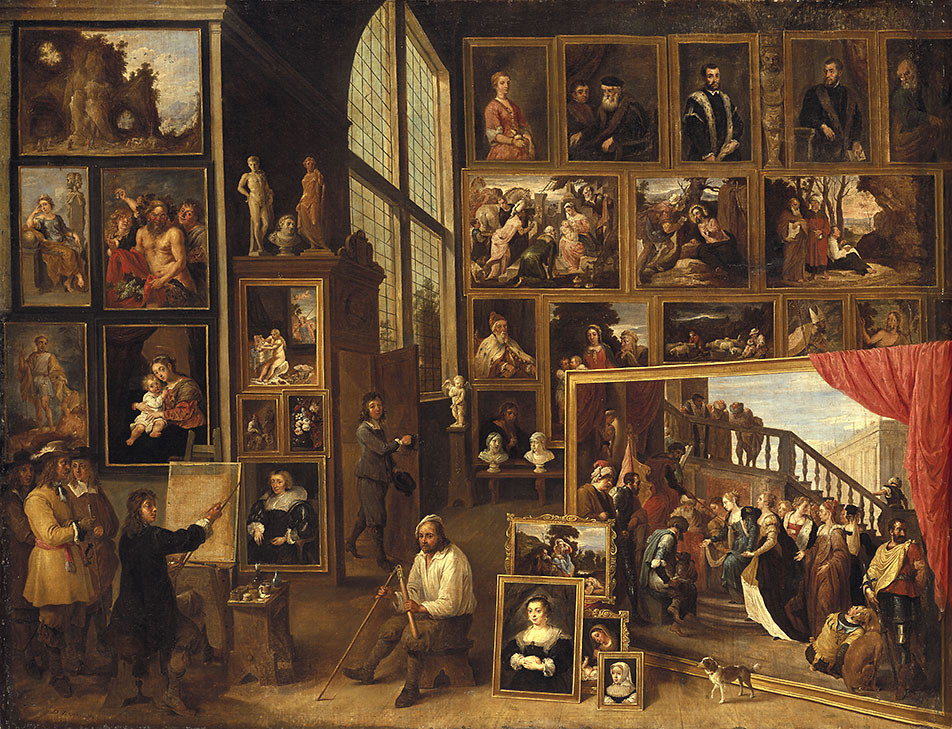 Grove City, PA. My Catholic and Greek Orthodox friends have occasionally observed as a universally-recognized truth that Protestants have a low aesthetic, presumably because there are only two Protestant sacraments, and/or because Protestant houses of worship intentionally exclude religious images. Since my friends always make the observation in a friendly manner, I ordinarily reply in a friendly manner that the idea is neither true nor universally recognized. The question, of course, is not whether some Protestant individuals have under-developed aesthetic sensibilities; the question is whether Protestant principles logically or consistently contribute to an under-developed aesthetic sensibility. I do not attribute the observation to ill-will or religious pride, or any other personal fault; I merely regard the observation as being confused about four things, which I briefly describe here.

In light of this brief list of Protestant musicians, authors, and painters, one is surprised to hear that Protestantism has a low aesthetic or squelches the aesthetic/imaginative impulse. I can hardly imagine a person suggesting that Spenser’s The Faerie Queene is unimaginative, or that Milton’s epic Paradise Lost is unimaginative. And if Bach’s creativity was stifled by his Protestantism, who knows how much the poor man may have accomplished had he not been so burdened. I take it that when some people, therefore, suggest that Protestantism cultivates a low aesthetic, they confuse graphic art with art per se; and (rightly) recognize that Protestantism has ordinarily prohibited the religious use of images in worship (on the arcane ground that God did so). But why should the graphic arts be the only arts recognized to be arts? Was Bach not an artist? George Herbert? Rembrandt? Fujimura? And the latter two were/are, in fact, painters.

A second confusion that I have occasionally encountered is the confusing of artistic creativity with artisanal craftmanship. Some of my friends speak animatedly about the “creativity” of the original makers of the tabernacle under the supervision of Moses as though this were a mandate for religious aesthetic creativity, even in the arena of religion or worship. But the example chosen would prove just the opposite. As any bored teenager reading the biblical narrative can attest, the craftsmen were not creative at all; they did everything—down to the most excruciating details—according to the plan/pattern delivered to Moses on the mountain (Ex. 25:40). Was it their idea to weave cherubim into the curtain or the veil, or to carve them into the mercy seat? Not at all; those instructions came from God himself through words given to Moses at Sinai, as a reminder of the cherubim who had guarded the garden after the expulsion of Adam and Eve. We might as well credit Moses with creating the ten commandments as credit the craftsmen with “creating” the tabernacle. They did indeed make/craft the tabernacle, but with no artistic imagination at all, and they were expressly proscribed from doing anything differently from the pattern or plan revealed to Moses at Sinai. If they were artistically creative, then we should attribute Paradise Lost to Milton’s daughter, since she actually “wrote” the entire thing at his dictation (since he was then blind). But no one attributes the grand artistic vision of Paradise Lost to Milton’s daughter (though we are indeed grateful for her stenography); her hands materially recorded his oral words, words that were the result of his—not her—creativity. Moses (and God who commissioned him) permitted, and even required, craftmanship, but not creativity, in the public worship of God.

Protestants believe that God has disclosed how he desires to be approached in public worship. The “rules” that guide and direct public worship (cult) are different from those that govern other parts of life (culture). Once the unholy humans were banished from God’s presence in Eden, they could no longer re-enter that holy Presence except by divine invitation and direction. What they do in other arenas of life (167 of the 168 weekly hours) is governed by other principles. Protestants, consistently with their own stated beliefs, may be (and often are) quite creative in other arenas of life, and sometimes even refer to those arenas as “worship,” in an all-of-life-as-worship sense. Their confessional standards, however, have a narrower understanding of terms such as “faith” or “worship,” especially when they address matters such as liberty of conscience, as the Westminster Assembly did in the Confession of Faith, 20:2: “WCF 20:2 “God alone is Lord of the conscience, and hath left it free from the doctrines and commandments of men, which are, in anything, contrary to his Word; or beside it, if matters of faith, or worship.” Here “faith, or worship” describe narrower arenas of life that are “free from the doctrines and commandments of men.” When not engaged in that narrower arena, they write music and literature, they paint and sculpt, they produce architecture, all consistently with their stated principles. In every area of life other than public worship, they are not merely permitted but encouraged to be as creative on a creaturely scale as God is on a divine scale, since they are made in the image of a creative God.

One might even argue that the Protestant aesthetic broadened the arts by including nature paintings, portraits of fairly ordinary people, and scenes from everyday life, whereas much of Catholic artistic work had been commissioned by the church and was largely devoted to religious art, such as biblical individuals, popes, or various saints. As the Art Encyclopedia website put it, “This emphasis was reflected in the number of common people and ordinary everyday scenes that were portrayed in Protestant art.… Protestant art focused on humble depictions of biblical scenes and moralistic depictions of contemporary everyday life.” Paintings of a simple wooden fruit bowl on a kitchen table, or of peasants harvesting wheat, were now fair game for the artistic gaze. By secularizing art, Protestantism actually broadened—not lessened–the artist’s scope and invited the artist to see the beauty beyond the explicitly or narrowly religious arena.

Some people confuse historical, confessional Protestantism with Revivalism, a mostly-American phenomenon from the nineteenth century, whose roots probably reside in Continental Pietism of the 18th century. In Germany, no one would argue that Protestantism and Pietism are the same thing because the early German pietists self-consciously distinguished themselves from the state-supported Lutheran orthodoxy of their time. In American life, “evangelical” and “Protestant” are sometimes used loosely to describe the same thing, though the roots are different. This confusion may contribute to the observation that “Protestants” have a low aesthetic because many studies of American Revivalism/Evangelicalism have demonstrated that the movement tends to be populist, pragmatic, anti-intellectual, and aesthetically indifferent.*

The earlier Protestant tradition that produced a Milton, Bach, or Rembrandt, and later a C. S. Lewis or Makoto Fujimura was neither anti-intellectual nor aesthetically dull. Luther, a Renaissance-trained polymath, was the first individual since Jerome to translate the entire Bible into his own vernacular language, and he also wrote at least 36 hymns, at least one of which is in the current Catholic hymnal. It may very well be that the later, American religion that we often call “evangelicalism” had or has a less robust aesthetic vision; but the earlier confessional Protestant vision was quite robust.

At college football games, the spectators are seated on opposing sides of the field and cheer for their respective teams. Some of my Catholic and Orthodox friends wish to seat us Protestants on the other side of the aesthetic stadium; and I suppose they have the right to choose their company. Even if they seat us on the other side, however, we will still cheer for the same team they cheer for. Yes, Protestants were zealous to remove from divine worship several of the medieval practices that were without scriptural warrant, and many/most were especially zealous to remove images. In other areas of life, however, the strong doctrine of the image of God motivated and motivates Protestants to emulate God the Creator, who made both practical things and beautiful things for His glory and the well-being of the human race. When we are true to our own heritage, and true to our strong doctrine of the human as made in the image of a divine Creator (whose Eden was both “pleasing to the eyes” and “good for food”), we will always promote and defend the human aesthetic enterprise.

* Richard Hofstadter (Anti-Intellectualism in American Life, 1964, Pulitzer), Nathan O. Hatch, The Democratization of American Christianity (1991), David F. Wells, No Place for Truth: Or Whatever Happened to Evangelical Theology? (1994), Os Guinness, Fit Bodies Fat Minds: Why Evangelicals Don’t Think and What to Do About It (1994), Mark A. Noll, The Scandal of the Evangelical Mind (1994), Jesus Christ and The Life of the Mind (2011).