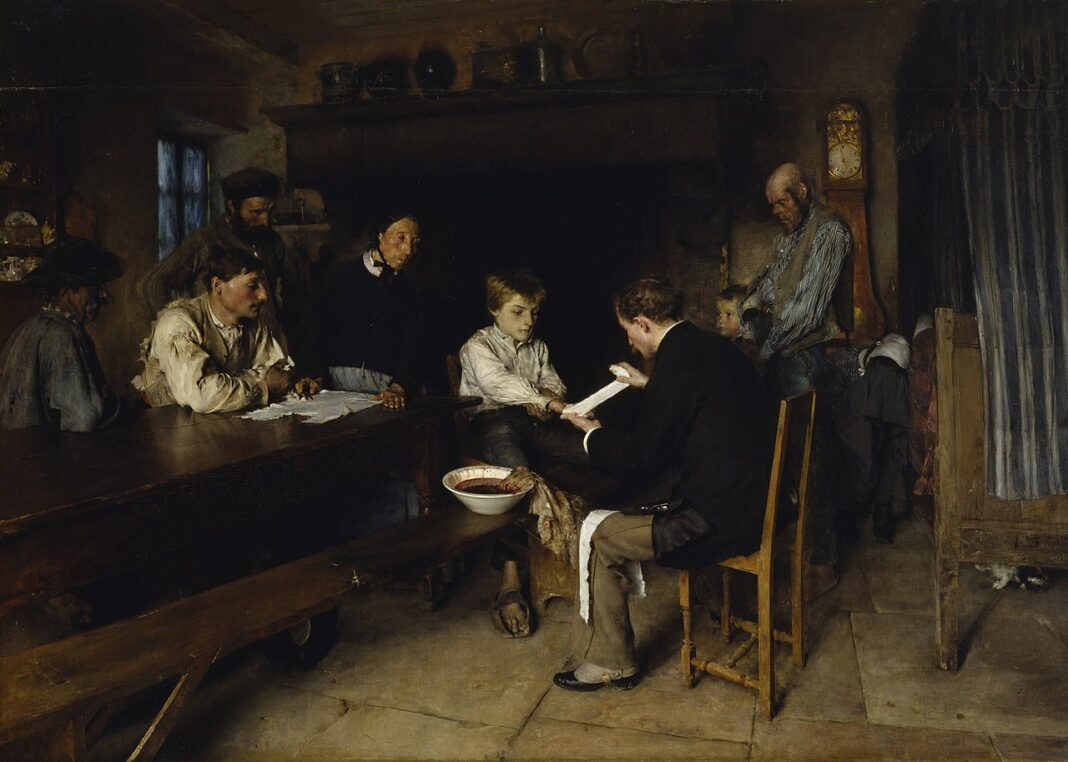 St Louis, MO. It is a truth universally acknowledged that Jane Austen’s writing is far superior to any possible cinematic rendering thereof. The same could be said for great literature in general, perhaps, because one cannot capture on film the many fine details, shades of meaning, brilliant asides, or even entire subplots of a first-class novel. Ask any true Tolkien aficionado their thoughts about Peter Jackson’s Lord of the Rings movies and their concern about Amazon’s upcoming series, and you will get a lot of strong opinions, rarely positive.

This thought struck me on a recent re-reading of Austen’s Emma. Although I enjoyed the creativity of the recent film treatment of it, the book was a far greater delight. A single word in the book—only a few pages in—easily gets one thinking in a way the movie did not. It was found in the description of Emma Woodhouse’s widowed father: “having been a valetudinarian all his life, without activity of mind or body, he was a much older man in ways than in years.”

People don’t use words like “valetudinarian” anymore. They are too long and too … Latinate. The word is what I’d call a Buckley—a long word, fraught with specific meaning, yet deemed irrelevant by those who would dumb down the English language.

The great Dr. Johnson, of whom Austen was so fond, and whose dictionary predated the novel by only 60 years, defines it simply as “weakly; sickly; infirm of health.” But surely there must be more, and Johnson quotes Jonathan Swift: “Valetudinarians must live where they can command and scold.”

A valetudinarian is not simply a hypochondriac. Whereas the latter consider themselves to be always sick, the former is always living in fear of becoming sick and extends this fear to others. This specific meaning of valetudinarian seems apt for Mr. Woodhouse, and in this age, two centuries after Emma was published, it seems to have become a national characteristic. “From our constant and increasing concerns about health, you can tell how seriously diseased we are. … We are suffering from an almost universal hypochondria,” Wendell Berry wrote in a 1994 essay defining health.

“The body is seen as a defective or potentially defective machine, singular, solitary, and displaced, without love, solace, or pleasure,” he writes. “Its health excludes unhealthy cigarettes but does not exclude unhealthy food, water, and air. One may presumably be healthy in a disintegrated family or community or in a destroyed or poisoned ecosystem.”

Rather, Berry would look at health as something not simply affecting an individual, but a community: “I believe that the community—in the fullest sense: a place and all its creatures—is the smallest unit of health and that to speak of the health of an isolated individual is a contradiction in terms.” Berry is surely right, but fostering communal health proves difficult when the body politic is afflicted by valetudinarian scolds.

Two examples of our national valetudinarianism come to mind as we move forward in the 21st century. First, it has arisen as a primary symptom of the COVID-19 pandemic. Since early 2020, a large group of Americans have become fastidious about not just their health but the health of others. This cohort is much larger, or at least louder, than those who decry the prevalence of processed foods in the American diet or even the continued existence of the tobacco industry.

The control these people want to exert shows itself the most when it comes to masks and vaccines, two different tactics in the public health approach that are often conflated, even though the former has always been more about protecting others and the latter about protecting oneself. As forcefully as those who would mandate such measures push, the other side— composed of those who favor individual choice—pushes back even more.

Three things conspire to move this emotion up a notch, even to violence. First, this pandemic coincides with a time when every disagreement in American life has become overtly partisan and politicized. Second, social media platforms make it so much easier and quicker to spread anger and misinformation. People are ripping masks off others’ faces; recently, a college professor resigned in the middle of a class because a student refused to wear a mask correctly. These are the actions of desperate, confused people.

Finally are the shifting sands of modern science as it evolves along with the variants we face and the resulting confusion. With a snap of its gloved fingers, the Centers for Disease Control was quick to allow the vaccinated to remove their masks—and just as quick to take away the privilege.

With the waning of COVID cases in spring 2021 and with vaccines finally being provided, long before the Delta variant arose, one hoped that things would soon become calmer. One was wrong. An April New York magazine feature on “The Forever Maskers” explained about how some people were not planning to take their masks off anytime soon. In May, The Atlantic looked at the flipside of the media trope that conservatives don’t take the pandemic seriously enough, covering progressives who take it too seriously: “Even as scientific knowledge of COVID-19 has increased, some progressives have continued to embrace policies and behaviors that aren’t supported by evidence, such as banning access to playgrounds, closing beaches, and refusing to reopen schools for in-person learning.”

Now, months later, as the Delta variant causes numbers to rise, we find ourselves in a new version of the old debate, a version focused on vaccine mandates and whether they should have conscience exemptions. For Catholics, bishops and Vatican officials are in fundamental disagreement with each other over this. Some bishops forbid their priests from providing religious exemptions, and some provide their priests templates to use for quick-and-easy exemption letters.

In an early September update on the crisis, President Biden said that the vaccines “provide strong protections for the vaccinated,” and that “the world’s leading scientists confirm that if you are fully vaccinated, your risk of severe illness from COVID-19 is very low.” Yet in rolling out his proposed new national mandate for larger employers, he noted it would “protect vaccinated workers from unvaccinated co-workers.” All this rhetoric does is sow confusion.

The pandemic will end, even though some forever-maskers and others may never accept the fact. But the second great example of valetudinarianism in today’s world promises a much longer tail—climate change.

What connects arguments about the pandemic and the climate is, on the one side, a distrust of experts and politicians, and, on the other, the belief that science (however defined) is paramount and must dictate, not simply advise, policy.

The debate about climate change involves some fundamental questions: How much of what we’re seeing is anthropogenic, and how much can humans now stem or reduce climate change? How can we best mitigate or work around the impacts of climate change?

After years of walking around the edges of the issue, the powers that be in Washington are quickly moving forward with legislation to fight climate change that will bring wholesale change to many areas of human life, most focused on ending the use of fossil fuels. Some communities are abolishing natural gas in new homes, or even new gas stations. Eventually, maybe sooner than later, the internal combustion engine will be abolished, even though its replacement has its own host of problems. One easily sees how this happens: we replace paper grocery bags with plastic ones, then reusable totes, and the “green” replacements end up having their own issues.

These are fraught decisions with real trade-offs, yet the valetudinarians scold those who come to different conclusions than they do. Indeed, even one of the most profound and personal of human activities is up for public scrutiny and open vitriol—having children.

It is odd that at a time when the Chinese Communist Party has now allowed—allowed!—couples to have three children, Western democracies continue their demographic death spiral. Witness the recent award given by the ironically named Population Matters organization to Prince Harry and Meghan Markle for announcing they are only going to have two children. “In choosing and publicly declaring their intention to limit their family to two, the Duke and Duchess of Sussex are helping to ensure a better future for their children and providing a role model for other families,” a spokesman said.

One can expect that, with climate change policy being debated in the halls of power, population control will arise more publicly. After all, its lobbyists are already in action. In August, a guest essay in The Hill, an influential Washington media outlet, decried the lack of population control in current climate change legislation and stressed its importance in combatting climate change. “While not the entire solution, stabilized and declining national populations across the entire planet will make it far easier for countries to reduce the burning of fossil fuels and cut greenhouse gas emissions as well more effectively address environmental degradation, biodiversity loss, natural resource depletion, and pollution,” concluded consultant and former United Nations official Joseph Chamie.

It is against this backdrop that shaming and scolding parents occurs. How many large families have been confronted outside their homes over the years, in grocery stores, shopping malls, soccer fields, and even churches themselves for having an unsuitable number of children? Don’t forget Swift, quoted above: “Valetudinarians must live where they can command and scold.”

Let us return to Wendell Berry’s 1994 essay. He wrote movingly about his brother’s heart attack and time spent in the hospital for a double bypass and the excellent care he received – care that saved his life. Despite this, Berry saw how the hospital could not address the entire problem, for real health requires a healthy family and a healthy ecosystem. At the hospital, Berry’s sister-in-law was rightfully distraught with concern for her husband, and the small lesson he offers in his essay’s final anecdote is the most telling. The real healing came when his sister-in-law was hugged by one of the nurses, “which brings us to a starting place,” he concluded. That expression of love made the difference—and it is so often lacking in the responses our government and its experts are offering to today’s challenges.

Returning to Jane Austen: what we are experiencing today is far beyond Emma Woodhouse’s elderly father, pushing porridge as if it were a wonder drug. As solicitous as he was for the health of his friends and family, he acted more out of innocence and love. He was, after all, “everywhere beloved for the friendliness of his heart and his amiable temper.” Today’s bolder and rather humorless scolds might aspire to this description. Indeed, we could all aspire to conduct our conversations on public health with greater amiability and friendliness of heart.