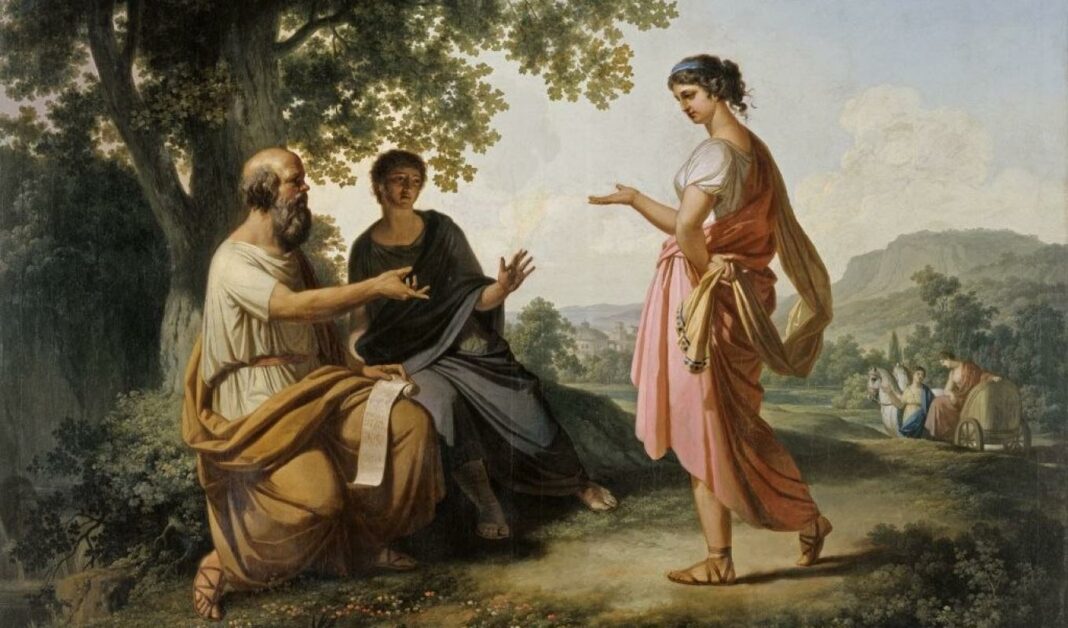 Houston, TX. The activity of philosophizing seems to have fallen on hard times. We are regularly distracted – a condition which makes putting things in intellectual order a herculean task. Beyond this, though, various mechanisms of Western political and social life seem to actively working against the conditions necessary for the practice of philosophy.

While examples abound, this denigration is perhaps most visibly displayed in our American universities. Notre Dame political philosopher Patrick Deneen has offered such a diagnosis, observing that the majority of his students inhabit what he calls a res idiotica. Deneen describes an unsettling image of his students, which is worth quoting at length:

My students are know-nothings. They are exceedingly nice, pleasant, trustworthy, mostly honest, well-intentioned, and utterly decent. But their minds are largely empty, devoid of any substantial knowledge that might be the fruits of an education in an inheritance and a gift of a previous generation. They are the culmination of western civilization, a civilization that has forgotten it origins and aims, and as a result, has achieved near-perfect indifference about itself… My students are the fruits of a longstanding project to liberate all humans from the accidents of birth and circumstance, to make a self-making humanity. Understanding liberty to be the absence of constraint, forms of cultural inheritance and concomitant gratitude were attacked as so many arbitrary limits on personal choice, and hence, matters of contingency that required systematic disassembly.

Most contemporary universities are ostensibly concerned with cultivating students who will go out into the world and do good. However, they lack the robust, theological anthropology required to accomplish this goal. An intellectual account of what a human being is must frame our understanding of how human beings are to act in the world. Such an anthropology is the proper place to begin rediscovering and fostering thinking as a practice.

A philosophic worldview does not simply come through taking a philosophy class. Is it not the case that by the time students come to college, they already have an operative worldview? My point is not that we cannot change our views; rather, my point is that young people do not wait to live their life until after they graduate from college. They arrive at their respective institutions having been already formed within a particular tradition.

Thinking or philosophizing as a traditioned practice calls to mind the philosopher Alasdair MacIntyre and his notion of “tradition-constituted-inquiry.” For MacIntyre, all forms of human inquiry and knowledge presuppose and are grounded in a particular intellectual tradition. Our home life, education, and civic relationships entail a particular worldview that is contextualized within a given tradition. This community is central for thinking, a practice that always takes place within an inherited conversation. The university classroom can be an opportunity to examine traditions and increase one’s own agency by explicitly accepting or rejecting aspects of one’s tradition.

This examination places before us a second fundamental component of understanding thinking as a practice. We could put this second feature into the form of a perplexing question: what is the standard by which our traditions are judged? The standard or paradigm by which we judge our traditions ought to be truth. The reason why one would accept or reject a particular tradition, hopefully, is because the tradition points towards or away from what is true.

In recovering thinking as a practice, students could come to see that the goal of a given tradition is not that we simply prefer it or that it is one held by a particular professor or thinker. Rather, the tradition guides one towards a truthful account of reality and human flourishing. Thus, a tradition of enquiry is judged as good to the degree in which it guides students in understanding reality as it actually is. Tradition is for the sake of helping human beings flourish as human beings.

A tradition, then, could be rightly considered along the lines of what the philosopher-mechanic Matthew Crawford calls a jig. According to Crawford, a jig “is a device or procedure that guides a repeated action by constraining the environment in such a way as to make the action go smoothly, the same each time, without his having to think about it.” The same idea seems to apply when conceiving tradition as a type of “intellectual jig.” It provides a real type of liberty, through its particular intellectual constraint, guiding one to do a specific activity well: in this case, it is the activity of thinking or philosophizing.

Thus, what tradition provides is a structure, a setup, for thinking well. This practice is not equivalent to what today is often called “critical thinking.” Critical thinking is worth defending, but it tends to de-emphasize this most fundamental aspect of thinking in favor of dismantling. That work is sometimes necessary, but the practice of thought must begin in gratitude: as Heidegger puts it, denken ist danken. The goal of this practice is to align oneself with what is true. A tradition frees a person to become excellent, to flourish, in thinking and acting well as a human being.

In connection with this is a third component of recovering thinking as a practice: a “practice” presupposes and cultivates a specific kind of relationship between the teacher and the student. We could refer to this relationship as between a master and his apprentice. These very terms indicate who possesses the relevant skill to accomplish his work in an effortless flow. While the professor does guide students in examining a particular tradition, the practice of thinking still entails inviting students to enter into a perennial conversation about the deepest questions of human existence.

Through cultivating philosophy or thinking in this way, the professor can reveal that both master and apprentice are judged by the same reality. If you want to be a good carpenter or a good electrician, you must allow the intellectual judgment that the true order of reality is the standard by which you may make something good. What constitutes a good chair or a good table is something independent of both master and apprentice. One’s own desires about what makes a thing good do not matter – the master craftsman will look at bad work and show why it is so. The wisdom of others and the order of reality place a check upon the ego. One’s desires cannot be the standard for determining what makes a particular craft or practice good.

Such an affirmation should not lead us to think that judgment is merely the prerogative of the master. Fostering a relationship between the master and apprentice and understanding the connection of both to the order of reality gives the apprentice an opportunity to judge as well. Working within a tradition does not mean that the tradition is above critique – such a criticism is more readily made by the apprentice or new practitioner than the master. This does not mean the undermining of tradition, but, instead, the real development within it.

The Irish writer John Waters elucidates what is at stake in seeing thinking as a practice:

To practice the craft is to enter into a relationship with a world that exists independently of oneself. To get better at something is to be drawn closer to an understanding of how the world works in practice. Such refreshing thoughts—rooted in the real—draw our attention to the point where the either/or of ideology gives way to a clearer set of perceptions arising from physical engagement with reality. Somewhere in there is the possibility of escaping also from the redundant idea that the good belongs exclusively to one side.

Notice the connection Waters makes: there is an intimate relationship between our worldview and the degree to which we regularly connect with the real. A sense of humility develops within us the more we gain experience with a reality which we did not make.

If the good is that which all of us are seeking, then we must be able to recognize that the reality of the good is not something that can be subsumed under individual control or will. In fact, just the opposite is so. In some way, we must give ourselves over to discovering what is good, most especially at the theoretical and practical level. By seeing what is good, forming practices and habits that are virtuous, we might be able to realize that this standard or paradigm of goodness is not our own.

Thinking as a practice places a check upon the self. It offers us a way out of our res idiotica. This relationship between thought and its paradigm calls to mind Plato’s Republic: Plato argued that the goal of life was to align oneself with a pattern – an Eternal Pattern, one whose origin was not manmade. Through this alignment alone could one’s soul ever possibly be good.

If our universities are faithful to their missions, they will look to foster the conditions where truth is free to be heard and sought. Without this practice, university students will simply conform to the present pattern, which encourages a jigless and tradition-less form of critical “thinking.”