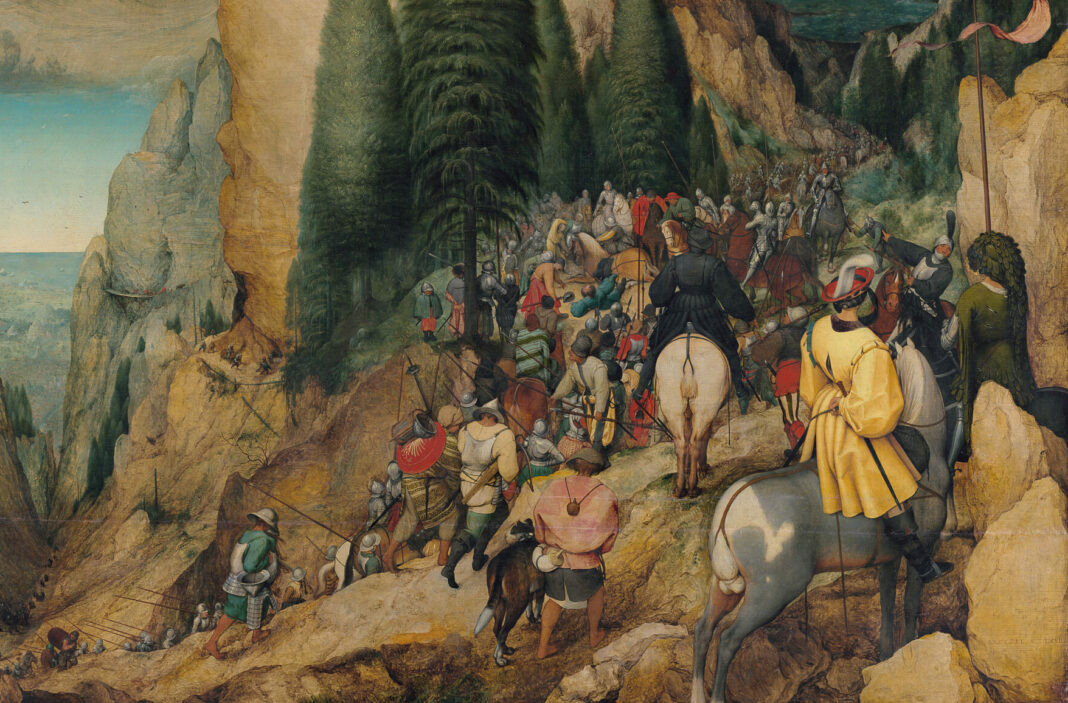 Cleveland, OH. In the beginning, God created the earth. For most people, God is found in the stars, the heavens, the great beyond that is our cosmos. While Christianity maintains God’s transcendence, Christianity also proclaims God’s incarnation, his creative use of dirt, and his care for the sparrows. While most might seek God beyond the stars, Mark Clavier brings us back to earth by telling a story of how we can encounter God in the trees, hills, and wind of the earth.

“I know many people are Catholic because of the otherworldliness they encounter in ornate liturgies and plainsong chant, the rich array of symbols and the secure embrace of the company of holy saints…That’s not why I’m Catholic. It’s the church’s earthiness that attracts me,” Clavier wrote. Clavier was not always a hiker, but in hiking Clavier came closer to God and now shares a spiritual journey with us just as much as he shares a spatial journey climbing up Welsh mountains and journeying through the Welsh moors.

By Catholic, Clavier, a clergyman in the Church of England, refers to the broad sacramentalism of Christianity. Among post-reformation churches, Anglicans certainly have aspects of their tradition that carry a “Catholic” appearance and emphasis. And it is that sacramentalism turned sacramentality that Clavier most passionately loves and explains in wonderful spiritual terms throughout A Pilgrimage of Paradoxes.

Clavier returns us to the essence of early Christianity, what he calls the “encounter” with God rather than the “explanation” of God. While God was certainly explained by early Christians, we can also say they articulated the necessity of encounter as much as explanation. Seeking after God and finding God in the world was part of the Christian mystical experience that is now so often scorned and mocked in our scientistic age where spiritual piety is measured more by correct explanation of confessions and dogma—explanations mirroring the systematic determinisms of scientific theory—than it is the wonderful and joyful experience of the Divine which often leaves us ecstatically bewildered and incapable of mere rationalism.

For a clergyman in a high sacramental Protestant tradition, Clavier recognizes the paradoxes of his spiritual tale. Catholics, as Clavier uses the term, are meant to experience God in the sacraments. While he doesn’t deny this, his story is the encounter and experience of God out in the world—the universal sacramentality that has inspired so many Christian theologians, past and present, most notably Saint Augustine whose shadow looms large in Clavier’s quixotically charming work.

The book is a spiritual journey into the heart of the Christian faith through the author’s pilgrimages in creation, those journeys and adventures serving as the basis for meditation and reflection on the core paradoxes of Christianity. What Clavier achieves is a return to patristic semiotics: encountering God through the world and using these encounters, these beautiful moments, to reflect and explain key Christian beliefs. In doing so, Clavier mystically unites encounter and explanation; like many Christians in the past who maintained God authored the holy scriptures and creation for us to know Him, so too does Clavier unite the key moments of holy writ with key moments in the world to unite encounter and explanation, experience and knowledge, into a life-giving apologia meant to deepen the Christian faith and unfold what it means to be human.

What gives A Pilgrimage of Paradoxes an aura of depth and complexity lies in how Clavier weaves together personal experiences in the wilderness, learned contemplation of Christian theology and biblical passages, and a rich penetration into the interiority of the soul’s relationship to the world and the Divine. What begins with a reflection on the wind tickling Clavier’s tent and whooshing along mountainside cliffs, things that most of us would consider unimportant and never leading to deep contemplation, Clavier transforms into meditations on timelessness and eternity, reflections on the nature of God’s love, and correctives to misunderstandings of Christian theology (like the claim of theological rationality being superior to mysticism and experience even among the scholastics).

Clavier, then, follows the noble tradition of Christian theological inquiry through his experiences in the world: drawing on the mysteries of the Christian faith in relationship to engagement and experience in the world; how worldly experience can be an analog, a semiotic, for Christian mystery; and how faith can be deepened by these meditative engagements with the world.

One of the great moments of the work is Clavier’s meditation on silence in the mountains under the chapter title of “baptism.” Clavier’s meditation on silence leads to an insightful discussion on how God uses silence as a means of communication. After all, when God spoke the cosmos into existence through Christ—per Augustine—it was done in silence. In the silence of the world we can either be alone or realize that we are in the midst of the tremendous mystery of relational cosmic love: “Thus, we discover that heaven is found not only somewhere out there but also at the very heart of creation—better still, we find that God is, indeed, all in all.”

Moreover, the silence of the scriptures—we don’t necessarily consider books silent but they are – they don’t talk to us in the way we talk to people, even though we use the language of rhetoric when describing our relationship with books—is a means of direct communication relatable to the silence we find in the world: “The unchanging, transcendent God who dwells intimately in our thick time calls out to us from his own divine silence through Christ his Word whom we encounter through stories.” Worldly silence, the silence of stories, and enchanting moments in the soft winds of the world allow us to dive deeper about ourselves. And the interior journey into ourselves is the calling home that baptism implies and signifies.

Mark Clavier’s book A Pilgrimage of Paradoxes lives up to its title. And its title gestures to the core of the Christian drama of salvation, in which an all-powerful and all-loving God becomes incarnate in the world, condescending in the lowly form of a man and dying a miserable and gruesome death to unite us with Him who at once is present in the world and exists outside of the world. We too often think, even now, that Christianity is “an otherworldly faith.” Clavier reminds us that this tenuous relationship between the transcendent and immanent is an essential part of the Christian faith and that we need not fear how life in the world can bring us closer to the God and the eternal homeland that lies beyond this world.

In fact, it is well within the Christian theological tradition that this worldly home we have our feet firmly planted in points us to the eternal home we are journeying to find. And Clavier’s book is a remarkable little catechism reminding us of this longstanding Christian belief. In reading Clavier’s book, I am reminded of an after-hike drink and dinner I was having in North Carolina with a fellow Ohioan I met by chance as the sun was setting—I hike to try and grow closer to God despite being, like Clavier, a “Catholic.” I give two cheers for Mark Clavier’s timely and eternal reminder to us that we should seek the encounter with God in the world; it may just give us a better appreciation and explanation for the Love that governs our world.

From the Trinity Capital

Science, Self-Deification, and Gnosticism in Nathaniel Hawthorne’s “The Birthmark”