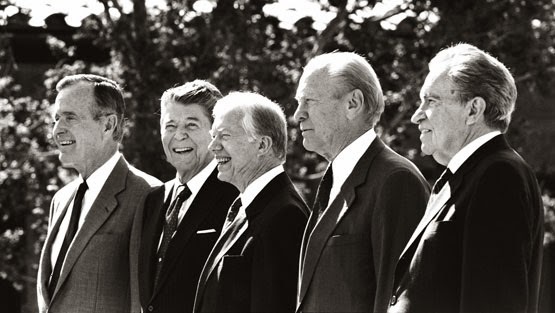 Boise, ID. As head of the Republican National Committee, George H.W. Bush long supported President Richard Nixon as the tide of the Watergate scandal rose. Nevertheless, his support did not become an “all-out offensive” against Nixon’s political enemies, as White House staffer Pat Buchanan advocated. Then, on August 6, 1974, a day after damning tapes were ordered released by the Supreme Court, Nixon gathered his cabinet and declared, “One thing is certain—I will never resign the Presidency.” On August 7th, Bush hand-delivered a letter to Nixon that began, “It is my considered judgment that you should now resign.” On August 8th, Nixon announced his decision to resign the next day.

In a letter to his children penned two weeks prior to his letter to President Nixon, Bush lamented the “abysmal amorality” of the Watergate affair. In her book My Father, My President, Doro Bush Koch shares at length the lessons Bush advised the next generation to take forward from the then still-unfolding drama:

Listen to your conscience. Don’t be afraid not to join the mob—if you feel inside it’s wrong. Don’t ever confuse being “soft” with seeing the other guy’s point of view. In judging your President give him the enormous credit he’s due for substantive achievements. Try to understand the “why” of the National Security concern; but understand too that the power accompanied by arrogance is very dangerous. It’s particularly dangerous when men with no real experience have it—for they can abuse our great institutions. Avoid self-righteously turning on a friend, but have your friendship mean enough that you would be willing to share with your friend your judgment. Don’t assign away your judgment to achieve power.

In the days that followed that letter, Bush would practice what he preached, and his role in nudging Nixon out the door of the White House was a long-term service to the nation and its institutions, including the Republican Party.

In a recent piece at The Dispatch, David French deftly highlights the parallels between our times and the 1970s and 80s. Inflation and a Russian-sparked war in Europe are again first order concerns, and a Democrat occupies the White House after successfully campaigning as a healing astringent following a cleaving Republican regime. President Biden may well fall into similar pits as those that stymied Jimmy Carter (including too many leftists in an administration billed as centrist) and which ultimately produced a crisis of American confidence. Though one can debate the long-term impacts of his policies, Ronald Reagan met the moment with clear vision and character that transcended both the memories of Watergate and the inadequacies of the initial Democratic response.

Instead of being reinvigorated under Reagan, suppose the GOP had never moved on from its mercurial leader? French observes, “To put the present GOP in context, what if the dominant percentage of the party was convinced that the answer to Carter was more Nixon? And that Reagan was a traitor if he dared challenge his corrupt predecessor?”

To his credit, Nixon did resign and then largely avoided the limelight, stepping in only occasionally in the hope of rebuilding his reputation for the history books but not in an attempt to regain the reins of power. A generation later, Bill Clinton would place the preservation of personal power over the well-being of the Presidency. Clinton survived impeachment and set the stage for Donald Trump to today stand as a twice-impeached front-runner for the 2024 GOP nomination.

In our day, the RNC serves not as a guardrail for the Presidency and Republic but as a (pre-conversion) Chuck Colson-style hatchet man doing the bidding of a deeply flawed individual. With its recent censure of Representatives Liz Cheney and Adam Kinzinger for their participation in the House Select Committee investigation into the January 6 riot at the Capitol, the RNC has ignored the advice Bush gave his children. It has assigned away its good judgment in an effort to achieve power. To the RNC, Cheney and Kinzinger are “participating in a Democrat-led persecution of ordinary citizens engaged in legitimate political discourse.” One wonders if former Vice-President Mike Pence, who recently reiterated publicly that Trump was “wrong” in his assessment that Pence had the power to “overturn the election” on January 6th, will be next to draw an official rebuke from his party.

With Trump there will be no tapes emerging to demonstrate a hidden dark side. Trump’s warped personality is spotlighted as a feature not a bug. In 2015 former Texas Governor Rick Perry (for whom I once worked in a minor role) rightly called Trump’s candidacy a “cancer on conservatism” and Trumpism a “toxic mix of demagoguery and mean-spiritedness and nonsense that will lead the Republican Party to perdition if pursued.”

Eventually, Perry redefined the cancer as a growth opportunity and the road to perdition as a route worth traveling. Trump’s former Secretary of Energy was recently in attendance at a rally near Houston receiving praise from his former boss moments before Trump called American elections “corrupt” and dangled pardons for January 6th rioters. Later, Trump would clearly state his belief that Pence on that day “could have overturned the Election!” What Nixon might have mumbled in the Oval Office and fought to keep from the light of day, Trump says on stage or writes for the world to see.

Pence called the notion of one person overturning an election “un-American” and has staked out a position towards Trump somewhat similar to that of Bush’s to Nixon, avoiding personal attacks but setting boundaries to protect institutions. If there is to be the equivalent of a Reagan following President Biden, he or she will face a more difficult task than the one leaders faced in 1980. Reagan only had to deal with the political ghost of Nixon, but a candidate in 2024 will have to deal with a flesh and blood Trump and a party with too few who are currently willing to place principle before a cult of personality.

Dilemmas of conservatism: start with the labeling…