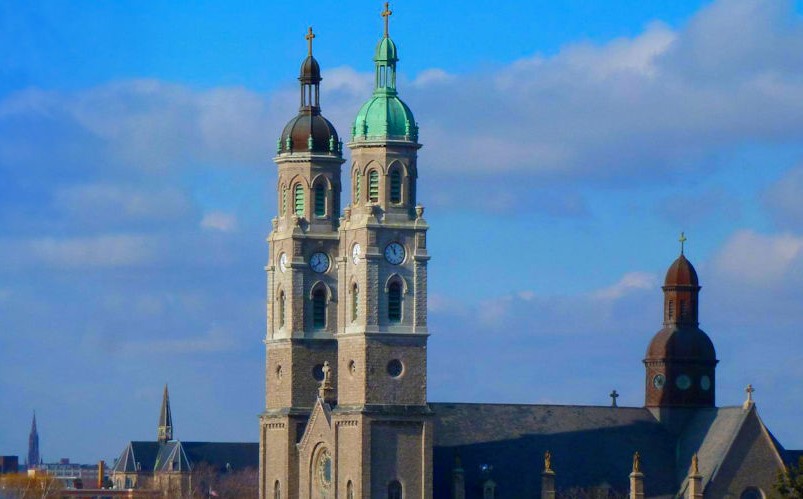 Warsaw, Poland. I have no idea where I will be buried. It isn’t the sort of question that, as a child, I ever suspected I would need to think seriously about. It had never occurred to me that my mortal remains would be interred anywhere other than the tranquil, tree-lined alleys of St. Stan’s Cemetery. After all, that is where the Poles of Cheektowaga, New York go when they go. St. Stan’s was a familiar and comfortable place in my childhood, thanks to the frequent visits with my father (no doubt he intended as much to inculcate filial piety as to tend the flowers). My ever-economical grandparents, seizing a too-good-to-miss deal, purchased their own plot and stone here long before intending to take up residence. Visiting one’s grandparents’ tomb with said grandparents standing a few feet behind rather than beneath is in retrospect an admittedly quaint experience, but it never seemed that way to me. For me it was natural. Looking just a few rows past their stone to the open field beyond, I could picture without hesitation my own final resting place.

The trouble with the dead is that they aren’t the most mobile of folk. You can’t simply pack them up with the rest of your possessions and stuff them in the back of the car for move-in day at the college town three hours away. No, the dead stay put. I left them, and the rest of Cheektowaga, at age 18, dutifully taking my place in modernity’s great pyramid scheme: move away and model a life of mobility for your friends to follow. I bought hook, line, and sinker the scam that to be someone, you have to be somewhere else. Forget about your hometown with its Rust Belt aesthetic and hard-to-pronounce name. Like a divorced dad, you can always visit on weekends and holidays. But real life – with its exciting career opportunities and flashy coastal cities where Big Things(™) happened – that couldn’t be had in your hometown.

The cemeteries? By age 18, I gave them as much thought as the world gave Cheektowaga: not all that much. It wasn’t that I had contempt for my town or the family, friends, or places that shaped and raised me. No, contempt would have required much more deliberation than I ever allowed. My crime was much worse: it was neglect. Showing even less respect for my town than a man who hates it and thus has at least given the matter some thought, I simply didn’t even consider staying around. No one even tried to keep me. The dead, not an argumentative sort to begin with, never had the chance. The living, God bless them, had been so thoroughly tutored by modern life that they could, in the same breath, say how wonderful was my “great opportunity” to go and how sad they would be that I couldn’t stay.

After college, the meat-grinder of the meritocracy spat me out in Washington, DC. There are no cemeteries in the DC area—or at least, if there are, the only one I’ve ever seen is Arlington… Perhaps they’re tucked safely out of sight, deep in the hinterlands of that byzantine labyrinth of strip malls, Darden restaurants, and six-lane stroads. You wouldn’t put them on full display in the heart of town, as they are in Cheektowaga. Cemeteries, after all, quietly but stubbornly remind modern man of the two inescapable facts he hates the most about himself: that he is from somewhere, and that he is going somewhere. Remember, O man, the tombstones say, that thou art dust, and to dust thou shalt return. Cemeteries are built and lovingly tended by communities, not by atomized individuals. But Washington, and other artificial places where no one is from, are dead precisely insofar as they have no dead. Washington has no need for cemeteries, because cemeteries denote a finality, a contentedness in place that is totally superfluous in the pseudo-culture of transience over rootedness, moving out over settling down, becoming over being. A cemetery says this place means something. This place, and no other, is where we will lay Uncle John and Grandma Dorothy. To tend a cemetery is to affirm the value of place and the wisdom of stability.

I can’t say those are values cherished by the coterie of DC transplants with whom I’ve thrown in my lot. Every visit home for Christmas, every long-distance phone call with Grandma, every soulless drive on the Beltway reminds me that everything in my life that is real, everything that is true, good, and beautiful, is at best only incidental to this foreign land. My wife and I have made friends and integrated into the local church. But even here, our community is a conglomerate of commiserating exiles, bound together by the fact that we’ve been torn apart. We’re trying to reassemble the puzzle, but we each carry a piece from a different set. We belong somewhere else, yet here we are. If that last line weren’t also a decent summation of the Christian life on earth, I don’t think I could stand it.

I find myself thinking ever more of those cemeteries I left behind years before in Cheektowaga. Can I even go back? I grasp in vain for any way out of the tar pits I flung myself into at the green age of 18. My career field, a fine-tuned niche in the federal behemoth, has no obvious analogue in Cheektowaga. And if I were to go back now, what would I even have to say to the dead, now that my generation has despoiled everything they built? For what or for whom would I be moving back? All but one of my cousins has scattered to the four winds, leaving my increasingly lonely grandparents at the eye of a rapidly dispersing sandstorm. My grandparents won’t live forever, nor, I fear, will any memory of the particular community they built and loved and nourished. Is all that is left for the dead to bury the dead? Last one out, turn off the lights?

As I write these words, I paradoxically stand both nearer and farther from home than ever before. I recently moved my family to Poland for a two-year work assignment. Here, thousands of miles further still from Cheektowaga, I find a curious solace. Here, after all, is the land whence came my forebears – those same giants of the genealogy whose graves I so dutifully attended as a child. Here, some six score years ago, my great-great-grandfather left the only home he ever knew. Like me, he was chasing a job. Like me, he never had any real prospect of going back home. Did he, years later, ever feel the way I feel now? On a frosty Cheektowaga Christmas Eve, did he think back to midnight Mass at his little village church in Bobrowniki? While painting the shutters on his new American house did he ever pause and think, even for a vanishing moment, of his humble cottage just outside town, back in the old country? I’ve been privileged to have visited that church, and I’ve broken bread with distant Polish cousins inside that same family cottage. And yes, I’ve prayed at the cemetery in Bobrowniki. How could I not? Standing there, before the graves of my hallowed dead’s hallowed dead, I feel at home. Fittingly, there is an open field beyond the last row of graves in Bobrowniki, much like the one at St. Stan’s. Here as in Cheektowaga, there is an ever-empty space for those who never did find their way back to take their eternal slumber next to father and grandfather. Those spaces will always be empty, but only here. The missing rows of graves at Bobrowniki found a home in Cheektowaga. And so it goes.

Like Cortés in the New World, I’ve burned my ships and stranded myself. For me at least, it’s true that “you can’t go home again.” But the rupture doesn’t need to be the end of the story. Like my great-great-grandfather, I have the opportunity to build a community again, to create a hometown that my children and my children’s children will grow to love and yearn for in a way that I will only ever feel, can only ever feel, for Cheektowaga. My own family story shows it can be done. I still don’t know where I will be buried. Most likely, as with my great-great-grandfather, I will not have the blessing of being buried alongside my forefathers. And unlike the Israelites, I will not have the consolation of bringing the physical bones of my Jacobs with me on my exodus. But perhaps I can find a little cemetery – not, alas, with as many Nowaks or Makowskis in residence as they have at St. Stan’s – where my children can have that blessing. I can make the conscious decision – along with all those other refugees, orphans, and expats in DC – to begin anew, to build a hometown for my children and theirs. Like Abraham, I am called to chart a new path in a foreign land. I have left my country, and my kindred, and my father’s house, and I have come into the land which the Lord – for reasons known only to His inscrutable wisdom – has shown me.