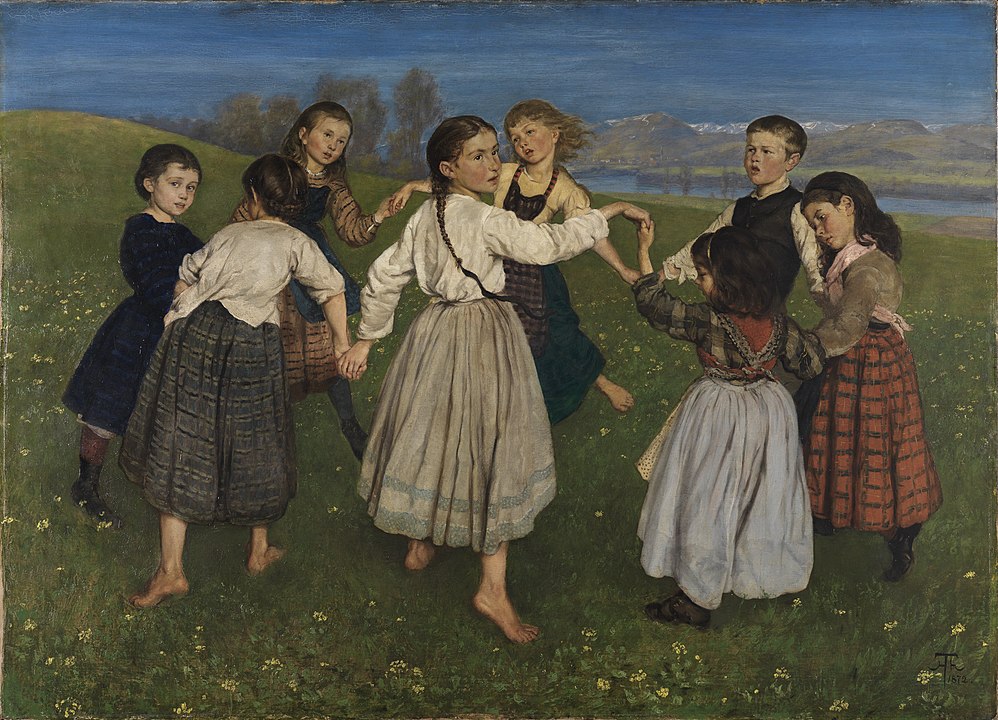 ​​Mount Rainier, MD. On a cold Saturday night in February, my husband, children, and I gathered in a parish hall with several other families to dance Scottish country reels to the music of live bagpipes. Most of us adults were learning alongside the kids. The caller showed us the steps, and as we learned, we passed it on to our kids: how to turn, when to bow, when to join arms. Our daughter and son, six and four, were hesitant at first to join the lines, but when my husband and I stepped in, they became brave and clasped our hands.

After several rounds (with breaks for lemon water and cookies), we decided to take our tired and happy kids home to bed.

On the way out, I chatted with a new acquaintance who was also homeschooling her children according to Charlotte Mason’s philosophy. We wanted to keep in touch, so I pulled out my dumb phone, punched in her digits, and texted her mine.

“Great,” she beamed. “I have a dumb phone too. I’ll check it eventually.”

As we drove home under the stars, I considered what a strange world we live in. Wasn’t it C.S. Lewis who said friendship is born at the moment when one person says to another, “What! You too? I thought I was the only one still to have a dumb phone.”

Of course, it was not a shared passion for near-vintage technology, like typewriters or cream separators, that had brought us together. No—this woman was a kindred spirit because she and I had both made a similar decision contra the zeitgeist: we’d chosen the limits of a dumb phone, and we’d chosen the discipline of dancing with our family.

I’ve never had a smartphone, and my husband exchanged his iPhone for a flip phone before we got married. It seems silly that such decisions can feel so momentous, for they seem quite ordinary and matter-of-fact most days—until I’m reminded of just how peculiar we are.

In fact, every family at the dance was there because each had decided to be weird. That is, they’d decided being human was worth stepping away from the dominant technological trends of our society, and that their kids were worth swimming upstream for. Each family had recognized that decisions regarding how to raise our kids, like whether we let them have smartphones, were not neutral. Neither were they merely personal or familial. Rather, such choices reflected our view of how the world ought to be, of what a human being is—and those choices would affect everyone around us.

We can’t raise our families by ourselves in our own islands. We need each other. And if we are going to resist the temptations this age offers to create our own realities through the metaverse, we are going to have to recover everyday joys and pleasures in thick community—like reading and praying as a family, cooking and eating together, singing folk songs with our kids, playing live music around the campfire, and limiting our reliance on screens.

So this group of families had pledged to keep kids off social media and smartphones for the next year, to limit parental use of technology, and to cultivate habits of attention and presence, all toward the ultimate end of loving God with our whole hearts. We’d recognized that our children need the limits as well as the disciplines of freedom—and so did we adults.

After all, it does little good to think we can teach our kids how to be free from the tyranny of technocracy if we’re checking Twitter at the ball game, Instagramming our daily lives, and Googling our way through life. It quells the cause if we claim to be a localist when our most-tread locale is the Twitterverse.

During the question-and-answer section of Helen Andrews’s interview with English journalist Rod Liddle on her book Boomers, one listener asked about the responsibility of Millennials for the use of technology and social media. Andrews’s answer: It may be “too late for us to save ourselves from our addiction to technology. The hope lies in how we choose to raise our children.”

But our children—and “our” includes all of us, whether we are parents ourselves or not—will need models. If we find solace in Netflix binges after bellyaching about the younger generation’s obsession with TikTok, we’d do well to look in the mirror and ask, What are we here for? Perhaps we’re scared of someone calling us a Luddite for not giving our kids phones till they’re sixteen. Can we really say we’re the grown-ups when we’re crippled by juvenile methods of name-calling?

We must train our children in the habits of attention, yes. But we ourselves need training, teachers, and mentors. We too need limits.

When my children were a few years younger, my husband and I visited New York for a writers’ gathering. We used no Uber. We rode the metro and used street maps, just as we had during our college days. My daughter rode on my husband’s back, while I held my son, then ten weeks old, in a sling.

I loved seeing the City again. But I didn’t like that there were even more advertisements, on large boards and tiny screens, everywhere one looked. The City was still there—it was just hidden, like so many parents hidden behind their screens.

I want to help my children see clearly beyond the screens to the real City—which means I need to train my own sight first. My task is to pass on not only the very good things I’ve received, but also to reach deeper for those things that have to be rebuilt and regained: communal trust, lasting marriages, faithful friendships, yes, but also the knowledge of how to step out of the digital-industrial complex and the throwaway culture, how to build a communal network that’s not organized by mere monetary wealth, how to care for yeast and soil, and how to keep the old stories and songs alive.

I admit that I also want to show my kids, and my students, that it can be done, and joyfully too. That just because everyone is doing it—shoving a screen into your kids’ faces and burying your own in one—doesn’t mean you have to. That there is a deeper reality beyond the screens that aim to make everyplace into nowhere. That cultivating silence matters.

That we can rebuild, and we can learn again the dance at “the still point of the turning world.”