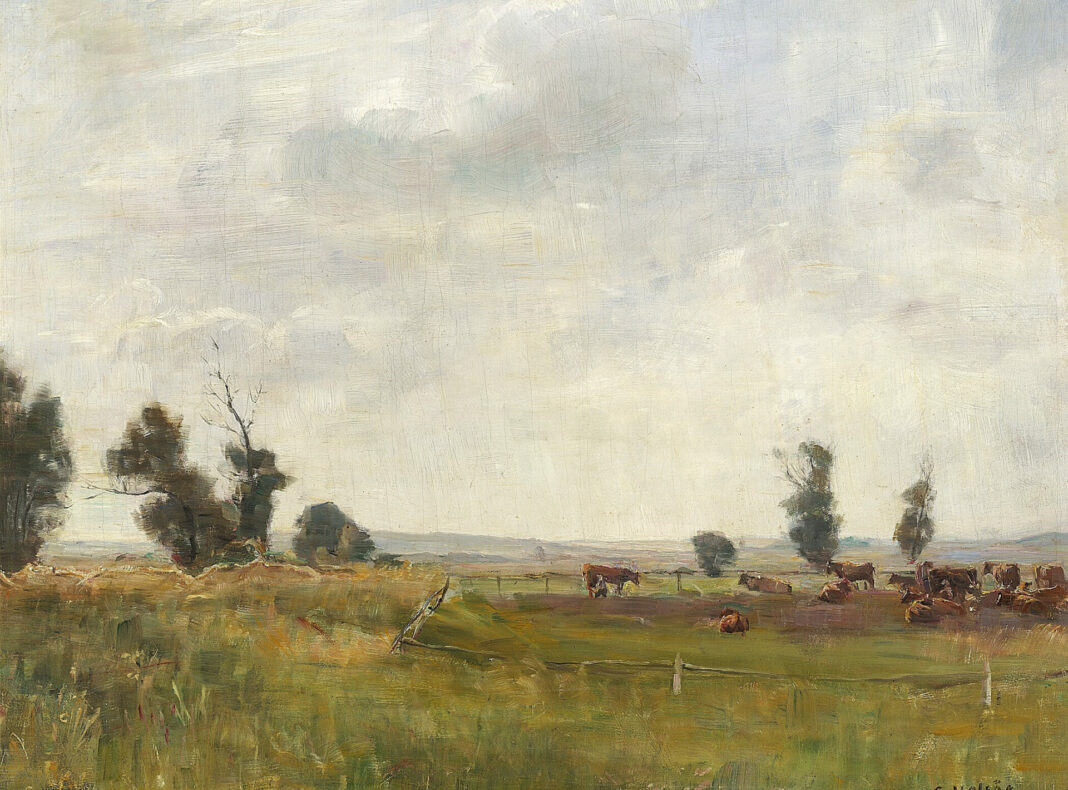 Johnson County, TN. Innovation is not intrinsically good and has probably never been on any list of Wendell Berry’s goals as an author of fiction. He has never chased the new or tried to be avant-garde. Even in the physical act of writing, he has famously resisted the “advantages” of a personal computer and has opted instead to continue using the older technologies of pencil and paper. Though How It Went is technically a new book from Berry, the stories are pleasingly familiar.

The stories feel familiar in part because the majority of the characters in them appear throughout Berry’s other Port William fiction. There are some new names and some of the stories develop minor characters—Billy Gibbs and Pascal Sowers, for example—but most of the stories feature known names: various Catletts, Coulters, and Branches populate the stories in How It Went.

And the collection coheres around Port William’s most familiar resident, Andy Catlett—a character whose life, Berry says, is “like my own” (The Art of Loading Brush 15). Andy is a central character in the ten stories narrated by an omniscient third person, the first-person narrator for two of the other stories, and is the most likely candidate for a third story that utilizes a first-person narrator. In short, these stories are about Andy and are sometimes narrated by him.

Finally, How It Went feels familiar because in the stories Berry returns to two of the recurring themes of his fiction:

1) the making of Andy Catlett’s mind and

2) the division between the “Old Port William” that existed before World War II and the new “post-war world” that invaded and undermined the existing agrarian order (161).

I. The “In-forming” of Andy Catlett

How It Went extends Berry’s exploration of what Andy called “the ancestry of my mind” in Andy Catlett: Early Travels. In “A Clearing” readers learn that Andy’s discovery of a small field of “perhaps twenty acres” on a neighboring farm had profound and lasting effects even though he never returned to the place again: “the beautifully kept small place . . . was surely one of the first landmarks or measures of his conscious allegiance, that would never again be far from his thoughts, that no doubt influenced every right decision he has ever made” (26, 28-29). Such early visions shaped and “in-formed” Andy, as did the education he received from the elders who taught him “by their example, instruction, and insistence the ways of livestock, of handwork, of all in the life of farming that would make him, beyond anything else he might become, a countryman” (47).

No early influence receives more consideration and contemplation in How It Went than Dick Watson—Andy’s grandfather Catlett’s hired hand. Both “A Conversation” and “A Time and Times and the Dividing of Time” establish that Dick was a master workman who “knew how to work,” “did not fumble at it,” and “never applied too much or too little force, but always just enough” (13). From the “eight-years-long conversation” between Dick and Andy, the boy learned the teamster’s art of working mules and horses as well as how to use a two-man crosscut saw (16).

For Andy (and Berry), though, Dick means more than the utility and beauty of the things Andy learned from him. Andy and Berry must also ponder “the racial, the broadening and bewildering, difference” between Dick and Andy (18). Thus, How It Went includes some of Berry’s thinking about what others might call “race relations.” Because the narrator of “A Conversation” is wary of using any “thought-word” to encase Dick and his relationship with Andy, the narrator focuses instead on their singularity: “Andy never thought of either of them as a representative of any category. He thought of them only as who and where they were” (18). I do not have the space in this review to analyze this and other statements about race in How It Went. I only wish to point out that any careful study of Berry’s treatment of race should consider not only The Hidden Wound and The Need to Be Whole, but also the works of fiction in which the topic surfaces: A World Lost, Andy Catlett: Early Travels, “Drouth” and “Not a Tear” in A Place on Earth, as well as “A Conversation” and “A Time and Times and the Dividing of Time” in How It Went.

II. Before and After World War II

How It Went also underscores the degree to which the years of the early forties were a watershed—both historically for the nation and its farmers and personally for Andy. The volume begins with “The Divide”—the story of V-J Day in Port William when young Andy, “ten days past eleven years old,” rings the dinner bell on his grandparents’ farm “with a fierce gladness in his heart for the end of war and the beginning of peace” (3, 6). With more than a little melancholy, the narrator notes that Andy “will not forget his simplemindedness”: for, of course, the day marked an end to only the current war and the beginning, not of peace, but of a widespread violence. The story ends,

And so ring the old bell, young Andy Catlett. Ring your ignorant greeting to the new world of machines, chemicals, and fire. Ring the dinner bell that soon will be inaudible at dinnertime above the noise of engines. Ring farewell to the creaturely world, to the clean springs and streams of your childhood, farewell to the war that will keep on coming back. (8)

Many of the stories in How It Went elaborate on the divide (and “The Divide”) by celebrating the people and ways of the older world, critiquing particular characteristics of the “post-war world,” or both. Readers encounter encomiums not just for Dick Watson, but also for Andy’s grandfather, Marce Catlett, for the way that they lived within the limits in place before the fossil-fuel age. Both men died before 1945, adding a personal dimension to Andy’s sense of what was lost during and following World War II. Andy says about his grandfather, “We would never know again in our country a man so intact, so fully incarnate as he was, who had never enlarged himself by a power that he had not spoken to and been heard by” (232).

Berry also adds to his critique of modern work that is too often undertaken with too much power and too little thought. Such a failure is at the crux of “The Art of Loading Brush.” Lacking the “all-day strength and stamina” one needs to build a fence, old Andy hires the job done and is furious over the signs of “ignorance, idiocy, laziness, violence, and haste” he sees when he examines the completed work:

He saw that wherever there had been a choice they had preferred the easiest way to the right way. . . . He knew that he would not outlive their bad work. And he felt with a sickness almost physical their insult to his place, to himself, and to the history, the legacy, of the good work of his forebears and friends. (144)

How It Went is not, however, reducible to a simple nostalgia that reveres the old and despises the modern. As is always the case with Berry, there are nuances and complications. Elton Penn provides one example. Readers may recall from earlier Port William fiction that Elton Penn is a masterful worker of horses and mules (see, especially, “A New Day” in A Place in Time). We are also reminded, in How It Went, that Elton was among the first in the Port William membership to purchase a tractor—a used one, “large for the time, with cleated iron wheels” (217). However, even after his purchase of the tractor, Elton remained an exemplary farmer “who longed to put his hand to the ground and cause it to flourish” (209). Elton’s first tractor, as well as the ones that came after it, may have placed more distance between his hand and the ground, but Elton continued to conduct farming that was beautiful, restorative, and profitable enough—which provides clear proof that Berry is not “anachronistic” in any simple, straightforward way.

Danny Branch and his descendants provide further proof. Berry outlines the principles and behaviors of the Branches in both Jayber Crow and Hannah Coulter; he fills in his sketch of them in “The Branch Way of Doing.” They are thriving because they are thrifty. They make use of both the “free provender from the waters and the woods,” but also any discarded “junk” that they bring home, fix, and use (119). Thus, they are not in any sense devoted to the old ways: they keep and work teams of horses or mules, but also tractors.

Hannah Coulter says of the Branches, “If I had ‘venture capital’ to invest, I think I would invest it in the Branches” (Hannah Coulter 152). If possible, I would make the same kind of hypothetical investment in “The Branch Way of Doing.” I think this story will thrive. I recommend it to those familiar with Berry’s fiction and as a good way to introduce new readers to Port William. I won’t offer any spoilers, but the story is funny. It also offers a kind of “economic practice, informed by something like a moral code” that anyone serious about living sustainably—and living better—should consider (118). And near the end of the story, Berry distills the Branch way of doing into a list of principles—a feature that reminds me of some of Berry’s widely known essays like “The Pleasures of Eating” and “Why I am Not Going to Buy a Computer.” Finally, Berry seems to feel plenty of affection for the story as well: he read it at SAMLA in 2014, published it in the fall 2014 edition of The Threepenny Review and in The Art of Loading Brush (2017) before also including it in How It Went. In other words, Berry appears willing for his readers to become very familiar with “The Branch Way of Doing.”

Berry’s use of familiar characters to extend his exploration of established themes shares some things in common with the kind of land use he practices and advocates. He is not a pioneer who razed a forest or plowed up a prairie to make his crops and raise his livestock; similarly, he is unlikely to go down in literary history as a trailblazer who fundamentally altered the way we think about fiction. His life’s work has been to (re)make a marginal farm and to create art imbued with the same ethic of kindly use. I imagine that things are constantly changing at Lanes Landing Farm, but that the place feels intact and familiar. I can imagine such gentle and gradual change—such flux-within-stability—because the same kind of equilibrium characterizes his fiction. New stories like those in How It Went add context, depth, and breadth to Port William. They tell us, once again, the kinds of work we can do to help mend a hurt world. Go read them.

Stumbling toward Vulnerable Interdependence: A Review of The Ink Black Heart

Learning to Live a Second Life in Two Stories by John...