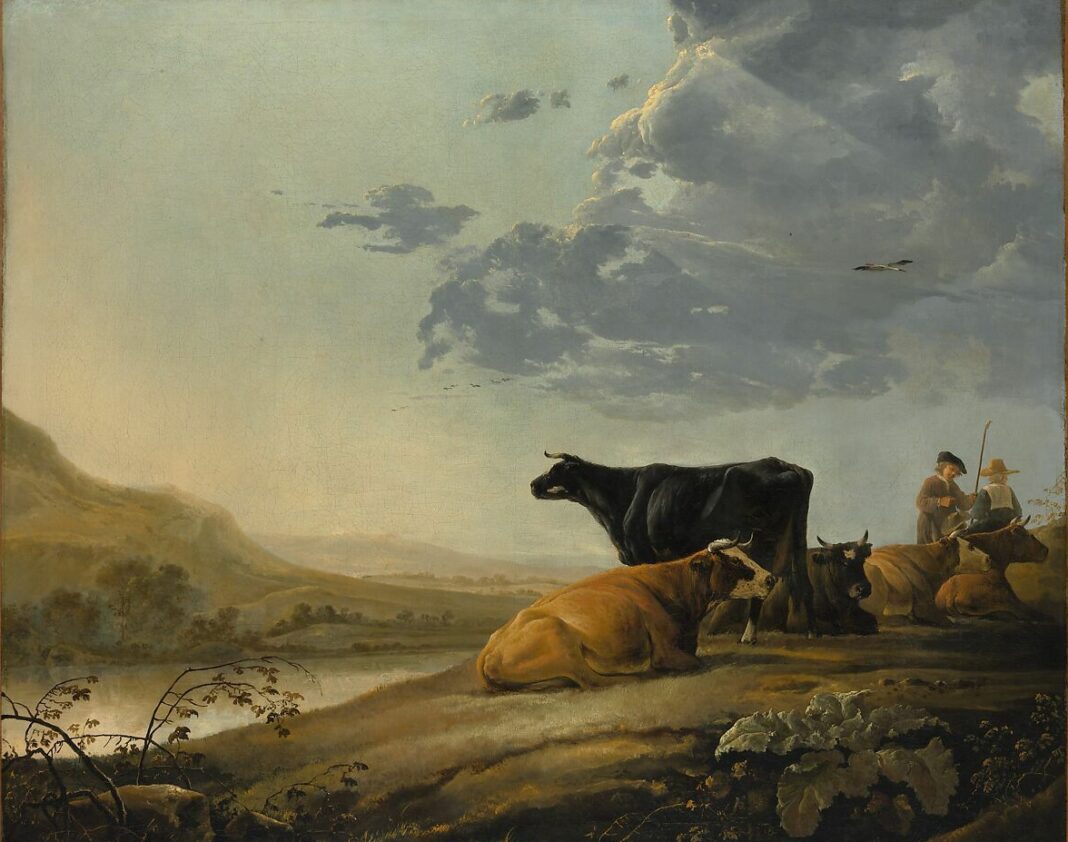 Brookfield, VT. My wife Jackie and I keep a handful of cows and sheep. We don’t do it for the money, but for the food security and as a way to combat the enemies of cows. Small-scale farming is the antidote to industrial agriculture and confinement animal feeding operations. It is a revolutionary act in the face of planned food supply totalitarianism.

We rent a small former dairy farm in Vermont. More precisely, we rent a dilapidated farmhouse with a shell of a barn and less than seven acres of land, a remnant of an 1850’s homestead that has not shipped milk in almost a hundred years. There are thousands of similar ramshackle remainders on the Vermont landscape, struggling structures that harken to the tens of thousands of small dairies of which these broken-down shards are but a shadow. Some 29,000 dairy farms thrived in Vermont pre-Depression: fewer than 600 (mostly larger) operate today.

Our grass-fed beef cows and sheep also eat off-property hay. We don’t keep a tractor, so I feed 600-pound round bales manually by leveraging them around with a pulp hook. I can move two bales per trip in my beat-up pick-up, and the cows eat one every two days. These now cost $55 per bale for 2021 (last season’s) hay, and the price of feed is climbing due to fuel and fertilizer price inflation: plastic wrap and twine have also skyrocketed. Next year will be worse.

We don’t carry the overheads of equipment, fertilizer, and property taxes that other farmers do. Vermont real estate prices, especially for farms, have soared since COVID struck as wealthy out-of-staters flocked here from New York City and other urban centers—the capital and carrying costs of farmland are prohibitive to profitable farming, and we avoid those as well.

Breaking my back manually rolling 600-pound bales (or heavier—I have 25 wet wrapped bales that likely top 800 pounds) in deep snow in 20-below-zero Vermont winters is challenging at age 59. But it forces me to stay physically fit. Together with shoveling manure and feeding four 50-pound square bales (also collected from farming neighbors) daily, this is my at-home gym membership. And there is no cash flow so far—we have seven mature cows who gave us seven heifers this year (we lost two, including one stuck in her first-time mother that took us two hours to extract, stillborn). One cow recently gave us a bull calf we named Phantom—it will be two years before he is old enough to slaughter for cashflow.

So is our Vermont “business” just for philanthropic farm support and physical fitness? No—it is primarily a bulwark against the erosion of farms by industrial farming. It is a duty, to my neighbors and community and grandchildren, and to the nation and world. Massive tracts of once-fertile farmland have been irrevocably swallowed by suburban and commercial development: small farms are the Agricultural Underground to combat the domination of Big Ag CAFOs and industrial food processors.

If this seems exaggerated, please read on. The battle for our ecosystem and food security begins and ends with cows—though there is much in between. The agrochemical companies, food processors, animal “rights” activists, the Great Reset, World Economic Forum, and Bill Gates are just a few of the forces that have come between humans and their longtime symbiotic cow allies.

Cows have been a symbol of plenty and sustenance since cavemen scrawled on walls. In classic art they make noble subjects, reminders of domestication and idyllic peasant life: often “the heroes are the cows themselves.” Cows are popular stuffed animals and children’s toys; subjects of youtube videos; they grace posters, calendars, kitchen aprons and coffee cups.

But a war on cows is well and fiercely underway. On one cow flank are animal welfare advocates, who complain that cows are bred artificially and their calves weaned early. PETA howls:

Cows produce milk for the same reason that humans do—to nourish their young—but calves on dairy farms are taken away from their mothers when they are just 1 day old. They are fed milk replacers (including cattle blood) so that their mothers’ milk can be sold to humans. Female cows are artificially inseminated shortly after their first birthdays. After giving birth, they lactate for 10 months and are then inseminated again, continuing the cycle.

Surely there are unacceptable practices in CAFOs, but PETA’s “final solution” is for humans to stop drinking milk. Small farms mostly treat their cows just fine, but PETA uses industrial ag to target…. cows. Humans transition their infants routinely from breast to formula for the liberation of women. This is profoundly unhealthy for their babies, but profitable for the formula industry. Women routinely shop for sperm at “fertility clinics,” but the replacement of men does not elicit the histrionic complaints occasioned by the reduced employment opportunities for bulls, who can break the backs of cows in (horny, or dehorned) bestial aggression.

Bovines are flanked on the other side with climate-urgent derogation by industrial giants, mainstream media, and AOC. The claim is that cows burp (or more inaccurately, fart) deadly methane. They are alleged to be planet-destroying villains. The cow experts at Time proclaim:

Worldwide, the amount of land used for crops and livestock doubled over the course of the 20th century, requiring the clearing of forests that once sheltered biodiversity and helped keep our climate stable by sequestering carbon. An increase in the global population of methane-belching cows, now over a billion-strong, has doubled atmospheric levels of the potent greenhouse gas since 1900. Farming is also responsible for 70% of the fresh water we consume each year. [Note the link to the World Bank.]

The Lorax of Big Farma is suddenly weeping for the trees! The proposed solution is to ban cows, and replace meat with patented vat-meat produced by complex bio-processes from chemical soaked soy. Could it be that there is a conflict of corporate interests with those of docile moo-cows?

100 Million Framers is a global platform driving an action-focused agenda anchored in regional and national coalitions that develop “lighthouse” projects led by multistakeholder public-private coalitions designed to reach a tipping point of farmers within the region to drive transformative change. ….Ambitious and integrated action across sectors is needed to rebuild the food and agriculture economy with climate, nature and resilience at its core.

The 100 million small farmers are opposed, not served, by “multistakeholder public-private coalitions” whose “core” is “climate, nature, and resilience.” Cows are the core; not their elimination. Cows—located within human-scale, diversified, resilient agricultural communities—will save the planet, not destroy it. The destroyers are Bayer-Monsanto, Dupont, Cargill, BSAF, and Syngenta, et al, who have enlisted the WEF, World Bank, and United Nations to accomplish their dirty-planet work in the false name of salvific rescue.

This scheme is dastardly in its audacity. It echoes the ominous intonation of WEF’s Henry Kissinger, who dubiously proclaimed “Control oil and you control nations; control the food and you control the people.” Americans launched a Revolution largely over food against British taxation of their sustenance, and victuals were vital to their success; Nazis inflicted famine on the Netherlands in retaliation for Dutch support of Operation Market Garden; Stalin starved Ukrainian kulaks; Mao starved tens of millions, as did Pol Pot’s Khmer Rouge. The American buffalo built up the rich soils of the West, and were decimated to inflict genocide on the Natives.

Sri Lanka shows what happens when agriculture-dependent chemicals are abruptly withdrawn before the dead soils are revitalized—with cows. Klaus Schwab and Bill Gates propose to save the world with a “Great Reset” that is strikingly similar to Mao’s “Great Leap Forward.” Central to this hairbrained technocratic malarkey is the persecution of cows, in order to secure dependency on industrially-grown and processed “products” to replace healthy foods.

This is why I cling to my cows (and sheep!) on my seven Vermont acres. It is unprofitable to farm on smallholdings because industrial domination subsidized by government and universities (see Wendell Berry) has made it so. But to raise one’s own food to supply local community is not unprofitable when food inflation and shortages inevitably strike national grocery chains.

I do not hoard critters like a prepper, rather I prep to battle the gathering forces of industrial hegemony. To nurture small-scale local agriculture is to oppose the Maoist, Stalinesque, Hitlerian, Huxlian, Schwabian, Gatesian push to monopolize global food production. My cows plod the Underground. And I plod along with them.

The cow wars are coming. Fight the oppressors: raise a cow!