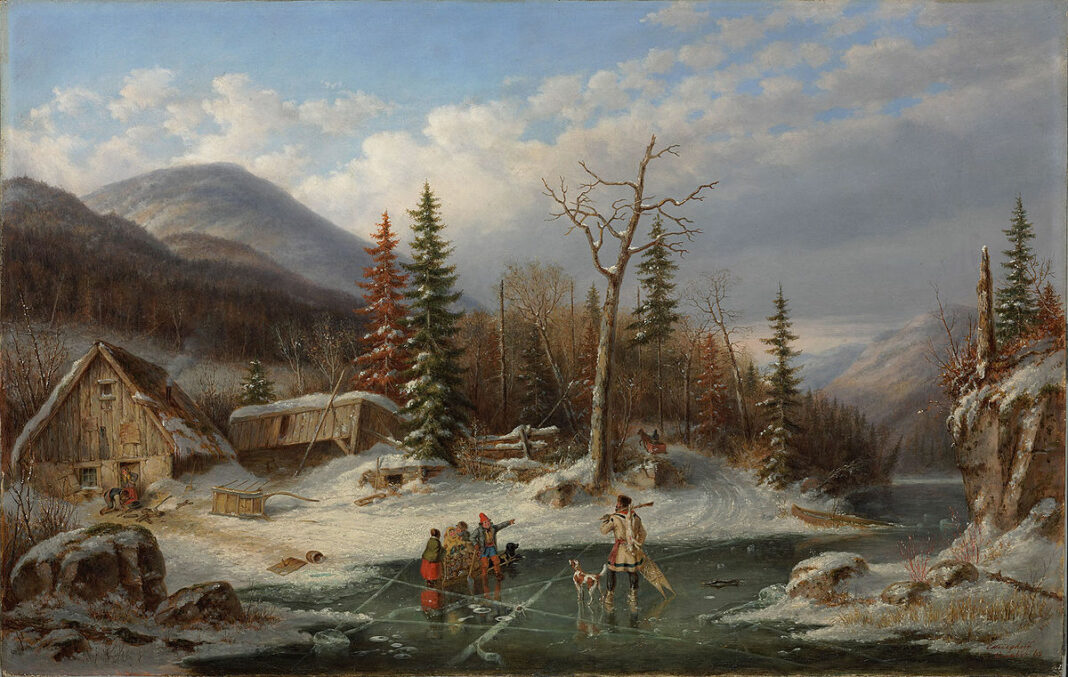 “No one can be wise before earning their lot of winters in the world.”

Vilonia, AR. Fall in North Central Arkansas provided no hint of the single-digit temperatures that would arrive a few days before Christmas. The summer heat refused to budge below eighty-five degrees in October, and then remained in the mild sixties through much of November. Still, we all knew that like death, winter was coming, be it fast or slow. No matter how heroic the struggle, sun-burnt leaves would eventually let go on the backside of the first Northwind, what Eleanor Parker describes in Winters in the World: A Journey Through the Anglo-Saxon Year as a wynter wage, the “pledge of winter.” Stubborn still-leaved outliers are made to join the inevitable downward drift when rain-beaten stems give way in a battle that is always lost. This is a lesson understood explicitly by the medieval, less so by the modern. Yet, even the most ardent utopian cannot escape the “cycle of seasons … a reminder that nothing in this world is stable.”

A literary book of calendric history, Parker, a specialist in the literature of medieval England and Scandinavia writes, “Every year, when the blossom springs and the leaves fall, we see what the Anglo-Saxon poets saw.” Though a thousand years on, the experiences in our lives may change us, but the seasons remain, and here we find a common humanity. As we grow and age, each cycle offers opportunity to reap a harvest of the seeds sown; to remake, renew, and recreate from materials gathered and given again. Nature returns our offerings with the gift of new fruit—sometimes better, sometimes worse than the harvest before. Close observation of the process, and tinkering adjustments in the seasons to come make us wiser as we do it again and then, again.

Autumn announces the unstoppable cold death that awaits. While mercifully gentle, it warns of the fleeting few days of respite before the hard freeze. If we listen close, as the medieval did, we may hear in the rustling of leaves the haunting sound of the Lord of the Underworld, the “king o Faierie with his route / cŏmen hunten him al aboute, / with dim cri and blowing.” We, like Sir Orfeo, experience the seasons sweep past like hunting hounds, but we “[know] not whither they went alway.” How many times have we said, “where have the years gone?” Yet whether we attend to the seasons rightly or blissfully forget, one day we all fall and return to the ground. The school of nature is in session to teach the same lessons of birth, death, and rebirth—perhaps because she knows how forgetful we are.

Parker points to the illustration, more than a millennia ago, in the alliterative verse of Solomon and Saturn, when nature submits to the Autumnal cycle: fealewia∂, fealla∂, and forweornia∂. That is, the leaves turn yellow-brown, fall, and die. This, I tell my World Lit I class, peering out the back window of our classroom at the trees on the base of Sugar Loaf Mountain, is in literary terms, a foreshadowing. It is our Dead Poets Society moment, the scene when Mr. Keating (Robin Williams) demonstrates the first order of poetry: death. Reminding his students to carpe diem, as we are “food for worms, lads.” Quite a wyrd concept for the young who have not lived many winters in this world.

The oft-used Old English word wyrd, what Parker calls the “mightiest” of power forces in the earth and sky, generally means “fate.” She adds, “it sometimes means ‘the inevitable forward movement of time,’ which carries humans along on its course.” The seasons, winter, lencten, sumor, and hærfest are the “most visible manifestation of wyrd” she writes. They are constant, no matter the will of humans. This is the subject when Shakespeare’s Macbeth meets the wyrd sisters on the heath. It was also the concern of Hesiod, Homer, Virgil, St. Augustine, Boethius, St. Paul’s writings, and any number of modern films or streaming TV series. From ancient to medieval to today, we arrive with the same questions regarding the mysterious, powerful wyrd.

Parker contends that this “power” is not arbitrary, but offers to the “mindful” observer three precious things: truth, treasure, and wisdom, as stated in The Menologium:

The longer we live, the more we fill our storehouse with “good and ill” experiences. Sorrow stays, but we go on like the clouds in the sky. Wisdom comes after gathering “many harvests” and weathering “many winters.” Do we moderns stop to think of suffering, as the medieval did, as a “dear treasure”? Even the ancients made the gods to desire the heroic humans who experienced something they never could. Autumn invites us to examine our blessed state and storehouses, for the time is short.

The personification and characterization of the seasons by Old English writers who “imagined the calendar imbued with divine power” writes Parker, is as if time itself “can be sacred.” She unveils the close kinship medieval peoples had to the natural world, and how we too recognize our own “experiences of growth and decay reflected in the cycles of the sun and moon and the waxing and waning of plants and trees.” Additionally, our very life is sustained by the food that is a product of this cycle of “growth and decay.”

For the medieval, Hærfest, the feast of bread blessings, began August 1st with Lammas (bread mass). Theoretically, this season continued through November 2nd. Anglo-Saxon existence depended upon the harvest, and we derive the titles Lord and Lady from the compound words that meant “bread-guardian” and “bread-kneader,” respectively. Today, we continue to emphasize the connection of bread with our own livelihood when we use the phrase bread-winner.

Bread-blessing was a serious undertaking for the newly converted Anglo-Saxon Christian. The Lord’s Table of bread and wine, and the Pater Noster’s prayer for “daily bread” was a matter of life and death. Parker points out that not just the harvesting of the crops, but the guarding of them proved “hugely important.” Harvest was both a joyful and anxious time of year. To survive the dark, cold, and sorrow-filled winters, was to heed the seasonal warnings, plan accordingly, and stay vigilant. And even that was sometimes not enough.

Parker reminds the reader that while “growing crops involves a great amount of human labor . . . there’s still much about the process that is beyond human control . . . (especially the weather).” Poets of the period are occupied with this “mysterious” component, “the invisible power that makes the crops grow.” Here enters the Harvest Kings, the most famous of which is Scyld Scefing of Beowulf. She finds the interior spaces of how human psychology responds to nature in this elegiac tale that uses the seasons to “explore the more abstract philosophical concerns of the poem.”

Winter reflects the danger of suppressed emotional “freezing of the spirit” as in the short narrative recounted in the main story of Beowulf. It is about the psychological impact of being kept within a “slaughter-stained winter.” The frail treaty of peace between the Danes and Frisians was imprisoned by the harsh weather that prevented the Danish leader Hengest from returning home. An oath was taken to not speak of blood spilled in the conflict while they were in close quarters, with emotions raw—waiting for spring to open the whale-road of escape.

Were the Danes able to return to their homeland, out of sight and mind of events that had just taken place, the peace might have held. But the ill-fate of seething winter storms on the outside “locked the waves in icy bonds, until spring came.” A type of Achilles’ rage festered on the inside of Hengest for revenge, born of the mirrored “bonds” of thought that caused grief to “surge” in the forced silence.

The poet sets all that turbulent human emotion in juxtaposition with something very different: the ordered, impassive changing of the seasons…[this] acts as a reminder that even in this poem about mighty heroes and kings, there are many things in the world that humans just can’t control.

Even if Hengest strove to take command of his “aching desire for vengeance,” he could not influence the weather, the seas, or the passage of time. Hengest breaks the peace and takes his revenge. Parker explains that medieval poetry paints a picture of winter as it “oppresses and constrains human beings in mind and body, with a power almost too much for the wintercearig (winter sorrowing) heart to bear.” Still, the poetry also characterizes winter as offering “evocative ways of thinking about human suffering, providing metaphorical language with which to evoke the storms of emotional turmoil or the chilling statis of grief.”

To the medieval scholar, the seasons “aligned with the four ages of human life: spring with childhood, summer with adolescence, autumn with adulthood, winter with old age.” The calendar shows that everything found in the world around us and inside of us, corresponds to the “heavens, the earth, and the passage of time; nothing is random, and human existence is part of a great pattern as huge as the universe.” Parker’s Winters in the World is an education fit for the Humanities and lay person who wishes to expand upon what it means to exist as humans in a world full of wyrd winters.

All Shall Be Well: A Review of Raft of Stars

Of Bees and Moonshine