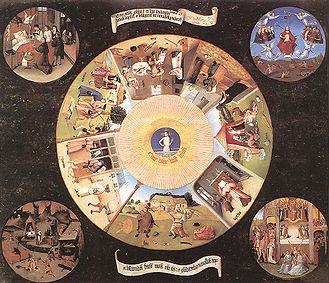 Alexandria, VA. In a recent column, E.J. Dionne precedes his praise for a new economic populism – anger of the populace directed at economic elites – with a somewhat gratuitous, but revealing snipe at a conservative position of which he clearly disapproves. According to Dionne, “Conservatives have argued for decades that the sins most dangerous to our society were rooted in lust when in fact they were rooted in greed.” Rather than wanton sex being our problem, wanton financial corruption is the culprit. That both forms of disapproval frequently have their source in populist ire toward hedonic activities of elites is uninteresting to Dionne.

Dionne should know better than to attempt to disassociate the seven deadly sins. For that matter, so should conservatives. Yet this is exactly the game plan – one so brilliant in its design that it’s hard to believe that it wasn’t concocted in a modern political laboratory. The effort to emphasize one vice – whether manifested sexually or economically, in this case – is of paramount political importance for our time, the way that our respective parties have differentiated themselves from one another. Liberals – so called – can forgive, even encourage any sexual activity as long as there are strict regulations on our economic behavior. Conservatives – so called – have been wont to permit nearly any economic, or “consumer” activity so long as there are efforts to restrict sexual license.

Can Dionne, or his “conservative” counterparts, be so certain that there is no connection between a society that valorizes, alternatively, sexual or economic license?  Can the divergent parties truly believe that a society of wanton appetite in one realm will not manifest unrestricted desire in another?  Does not a dynamic economy that generates endless choices and “values” promote a culture of sexual license?  Does not a culture of sexual license to a considerable extent rely upon conditions of prosperity that afford leisure and opportunity for a variety of experimentation?  Aren’t these simply two expressions of unrestrained appetite, ones that are not easily separated from one another? Are not both based ultimately upon the promotion of bodily pleasure – the pursuit of which is limitless and unbounded – over the hard won capacity of self-rule of the appetite?

This is not to say that there are not good reasons why the parties have separated themselves in this way.  Our conservatives are in fact, in the main, classical liberals:  they follow the teachings especially of John Locke and Adam Smith in believing that economic growth achieved through self-interest is the path to human happiness and flourishing.  Economic productivity is the paramount good, and thus a largely unregulated market is the best path to prosperity.  Our liberals are actually progressives; following the lead of John Stuart Mill, they endorse “experiments in living” that center on personal experience.  Both philosophies, for all their differences, are based upon the modern project that seeks the human conquest of nature:  whereas our liberal conservatives seek the conquest of the natural world through economic activity, our liberal progressives seek the transformation of human nature itself.  Both are committed to a human project of liberation from necessity or chance.  The human will becomes paramount, and our way of achieving its ends is through satisfactions of the body.

Further thought on the apparent division between our parties – one that condemns lust, the other greed – suggests that both at a fundamental level endorse a society of appetite and consumption and only secondarily urge the exercise of restraint, namely in the sphere that they deem not to be the locus of human liberation. For “liberals” – whose emphasis is upon our private liberties – freedom of the body in the sexual domain needs to be unlimited so long as there are constraints on our economic lusts. For “conservatives” – whose emphasis is upon our economic liberties – satiation of the body in the economic domain needs to be unlimited so long as there are limits upon our sexual greed. For the former, constrained economic behavior is subordinate to our sexual license; for the latter, constrained sexual behavior is subordinate to our economic liberty. Each seeks to protect a dominant sphere of unfettered liberty with cognizance of the need for some limits in the subordinate sphere. Each is fundamentally libertarian and secondarily seeks limits externally and centrally imposed. It is an interesting acknowledgement of the recognition of the need for restraint, albeit only in what is seen as the less essential realm of freedom.  Our own untutored inability to see the deeper connections between the two leads us to think that there is actually some important distinction between them. In point of fact, to the extent that each seeks to preserve a space for the unfettered appetite, each contributes to a culture that increasingly loses the ability to understand that unlimited appetite is a form of enslavement.

What is also important – and relevant to a Front Porch discussion – is that the sphere of liberty for each is to be one of fluidity of relationships, of unfettered mobility, of liberation from place. For the liberal, “metrosexuality” is an aim and ideal: almost perfectly portrayed in the early episodes of “Sex in the City,” frequent, random, and hedonistic couplings is the blueprint for true sexual liberation (Carrie Bradshaw’s wish of the show’s first episode to “have sex like a man” amounts to little more than this).  For the conservative, global economic relationships ensure that local circumstance and limits are superseded: no mortgage need be held in the town in which it originates, no product need be produced or extracted where it will be sold. In either event, bodies and dollars are fungible.  The achievement of wholesale economic or sexual liberty requires the overcoming of locality; however, because the very anonymity of the one venue of liberty also encourages liberty in the other (objectionable) venue, law and regulation are required to enforce the morality that is deemed desirable. Liberals (as the Obama administration will unveil today) increasingly rely on the administration of the central State to curb economic excess; conservatives turn increasingly to the law to seek enforcement of sexual mores, ironically in great part because the very economic dynamism they valorize leads to greater sexual opportunity. In both cases, the effort to overcome cultural restraints in either economic or sexual domains requires a growth of the apparatus of the State. Our purported liberty leads to its restriction.

For liberals and conservatives alike, respective limitations on sexual or economic liberty that result from constraints within a local setting are an unacceptable restriction upon liberty or opportunity. However, inasmuch as those restrictions are the result of the settled mores as well as of necessary limits on opportunity within local circumstance, and not the heavy hand of the State, it should be noted that there is, in fact, a distinctive form of liberty that exists within the more constrained sphere of the local setting. It is, above all, a liberty that is public and political, not primarily private, in its nature.  This form of liberty is, admittedly, one in which self-governance is part of a settled condition, one that is aided considerably by limitations imposed by circumstance. As the Anti-federalist Melancton Smith observed during the New York ratification debate in which he opposed Alexander Hamilton,

those in the middling circumstances have less temptation – they are inclined by habit and the company with whom they associate, to set bounds to their passions and appetites – if this is not sufficient, they also want the means to gratify them – and they are obliged to employ their time in their respective callings. Hence, the yeomanry of the country are more temperate, of better morals, and less ambition than the great. [emphasis mine]

For “liberals” and “conservatives” alike, we are only free when we have more opportunity to engage in preferred vices. However, in Melancton Smith’s view, our freedom is secured not by unlimited opportunity, but by that self-government enjoyed in a more limited realm absent large, imposing and activist State entities. We are more free when we are self-governed than when we seek thoroughgoing liberty in one domain and accept state-imposed restraints in another. Liberty is not the result of the State’s sanction and active intervention – most often employed to demolish localities and accompanying limits upon opportunity for private liberties –  but results particularly in the form of political liberty that is possible within a self-governing community.  The unholy combination of the contemporary liberal and conservative mindset has been an overall increase in the activities of the State – alongside the ceaseless growth of the military-industrial complex – to the point that few if any of our most private activities are not subject to some form of surveillance, influence, or control, and few of us enjoy any meaningful public liberty in the form of literal self-rule. Even as both our parties shout to the heavens in defense of liberty, both actively participate in the expansion of the State apparatus, each leaving one segment of it larger in their wake, never shrinking from one ruler to the next, ever-growing and expanding and devouring whole the capacity of local places to be self-governing in any meaningful sense.