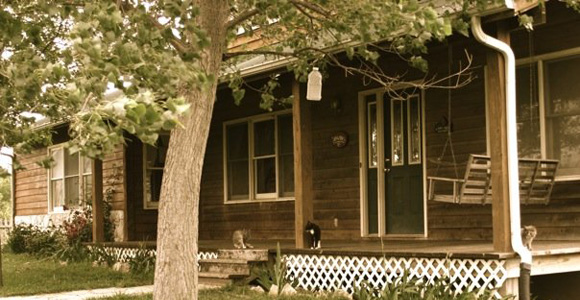 ALEXANDRIA, VA. Names are important, and few can be more significant than what a new publication calls itself. Perhaps at first greeting the name will give pause, causing the new reader to think momentarily about what it means, how it came about, what its creators intended. After a time its explicit meaning will fade into the backdrop, becoming a label that is rarely reflected upon, barely registered, but still confers meaning – increasingly implicit – for the undertaking, and for those who originally named it, or who write under its banner. A name such as this one – Front Porch Republic – deserves some reflection before it fades into that subconscious space.

I can think of no better text by which to explore the meaning of our publication’s name than an old essay – one few have encountered and even fewer still would remember – that I read during my freshman year of college in a course taught by the man who became my mentor and dearest companion still, though he has passed from this vale – Wilson Carey McWilliams. I’ve never forgotten the essay – it impacted me then, and remains with me still. It was written by a man named Richard Thomas, and was entitled “From Porch to Patio.” (Published in The Palimpsest, journal of the Iowa State Historical Society, in 1975). It had such an effect on me not only because of what it taught me, but because so much of my childhood and young adulthood had involved being in various ways on our big front porch where I grew up in Windsor, CT. It was more than merely theory – it taught me about who I was, and why that was so.

In this simple but profound essay, Thomas explores the social implications of the architectural practice of building porches on the front of homes and its eventual abandonment in favor of patios behind the house (I’ve discussed this transition in relation to the film “It’s a Wonderful Life” in comparing Bedford Falls to Bailey Park). As with any central feature in our built environment, this is more than merely a passing fashion trend or a meaningless design change: the transition from porch to patio was one of the clearest and significant manifestations the physical change from a society concerned with the relationship of private and public things – in the Latin, res publica – to one of increasing privacy. The porch, as a physical bridge between the private realm of the house and the public domain of the street and sidewalk, was the literal intermediate space between two worlds that have been increasingly separated in our time, and hence increasingly ungoverned in both forms.

Thomas expresses clearly some of the social dimensions of the porch, and contrasts them with the patio. The porch, he wrote, “presented opportunities for social intercourse at several levels.”

When a family member was on the porch it was possible to invite the passerby to stop and come onto the porch for extended conversation. The person on the porch was very much in control of this interaction, as the porch was seen as an extension of the living quarters of the family. Often, a hedge or fence separated the porch from the street or board sidewalk, providing a physical barrier for privacy, yet low enough to permit conversation. The porch served many important social functions in addition to advertising the availability of its inhabitants. A well-shaded porch provided a cool place in the heat of the day for the women to enjoy a rest from household chores. They could exchange gossip or share problems without having to arrange a “neighborhood coffee” or a “bridge party.” The porch also provided a courting space within earshot of protective parents [for more on this important aspect, see Beth Bailey’s From Front Porch to Back Seat: Courtship in Twentieth Century America]. A boy and a girl could be close on a porch swing, yet still observed, and many a proposal of marriage was made on a porch swing. Older persons derived great pleasure from sitting on the porch, watching the world go by, or seeing the neighborhood children at play.

By contrast, the patio reflected both new settlement patterns and the increasing desire for privacy and withdrawal from interaction with one’s neighbors. “In communities with high rates of mobility, one did not often want to know his neighbor. The constant turn-over of neighbors worked against the long-term relationships which are essential to a sense of belonging.” The patio, it was believed, was a symbol and practical expression of our independence, our liberation from the niggling demands of neighbor and community. Yet, Thomas insightfully notes that it was just as much a symbol and reality of a new kind of bondage, the bondage especially to the automobile and to the grim necessities of mobility, including long commutes and increasing isolation from a wide variety of bonds. It was too soon, perhaps, to note that this form of living also symbolized our increasing bondage to “foreign oil,” though at the time he wrote it America had just recently passed the apogee of oil production and would forever become dependent on foreign powers for our purported liberation through energy – particularly tyrants – eventually fighting a series of wars in a region far from where we should have any real concerns. The house, he wryly noted, housed fewer people but more cars, and it was our new inanimate occupant that “both freed us and enslaved us.”

In a microcosm, the forces that led to the decline of the porch as a place of transition between the private and the public realm have eviscerated both those domains of their capacity to educate a citizenry for self-government. The porch – as an intermediate space, even a sphere of “civil society” – was the symbolic and practical place where we learned that there is not, strictly speaking, a total separation between the public and private worlds. Our actions in private are not merely “private,” but have, in toto, profound public implications. The decline of courtship and marriage proposals within earshot of kin, for one instance, has led to ever greater “privatization” of our intimate lives, and a proportionate decline of the societal and public investment in undergirding families and the communities that foster them. Our private actions of driving ever greater distances in our automobiles have fostered devastated landscapes, deep dependence of foreign powers and tract housing devoid of real community. Meanwhile, our “public” world is increasingly shorn of the voices of citizens, wholly attenuated in the decline of the capacity of localities to govern their fates. For me, there is nothing more symbolic of this fact than the rush of Governors to serve the Obama administration, a sad, pathetic revelation that governing a State is less significant for most of our leaders than becoming a functionary in the national bureaucracy. Our States, not to mention our localities, are ever-less a kind of “porch,” that transition from the world of the home to the public realm of community and eventually State and nation. Instead, as wholly “private citizens” – or, to invoke the preferred term, “consumers” – accustomed to houses that are places of private retreat, we see only one public entity of significance – the national State – but find it difficult to see ourselves a part of it.  We regard the State as a distant and mysterious entity, occupied either by our team or their team but in either event an organization so vast, complex and dizzying that we regard it as anything but the locus of our practice of shared self-governance. We are daily less a republic because we daily perceive less of what are common or public things – res publica. Without the literal spaces where we come to know what we have in common through speech, habit and memory, we regard politics as a competitive spectator sport and government as a distant imposition – but in any event, anything but self-rule.

Tocqueville already anticipated the forces that would lead simultaneously to the retreat of individuals into a “small circle” of friends and family, on the one hand, and the rise of the “tutelary State” on the other. Tracing the logic of democracy, he foresaw a time when “no man is obliged to put his powers at the disposal of another, and no one has any claim of right to substantial support from his fellow man, [then] each is both independent and weak. These two conditions, which must be neither seen quite separately nor confused, give the citizen of democracy extremely contradictory instincts. He is full of confidence and pride in his independence from his equals, but from time to time his weakness makes him feel the need for some outside help which he cannot expect from any of his fellows, for they are both impotent and cold. In this extremity he naturally turns his eyes toward that huge entity which alone stands out above the universal level of abasement. His needs, and even more his longings, continually put him in mind of that entity, and he ends by regarding it as the sole and necessary support for his individual weakness” (Democracy in America, II.iv.3).

We rarely consider the ways that our built environment – even something so simple as a front porch – constitutes some of the necessary conditions for self-government. Thinking of ourselves in ways that can only be described as simultaneously disembodied (by means of our technology) and wholly embodied (albeit only as monadic individuals), we ignore the way spaces shape us, even prepare us for lives of responsible citizenship, community, and the proprieties of private life. Instead we simultaneously crave a retreat into the purported liberties of the private realm, yet regard the only public entity worthy of our attention to be a distant and inaccessible government. For those who would stand and defend the future of the Republic, a good place to start would be to revive our tradition of building and owning homes with front porches, and to be upon them where we can both see our neighbors and be seen by them, speak and listen to one another, and, above all, be in a place between, but firmly in place.