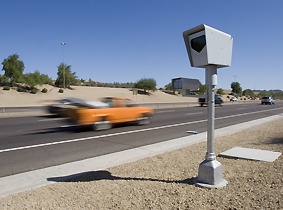 PHOENIX, ARIZONA. Three hundred sixty bucks. Two tickets. Over the course of one month. Handed to me not be an overzealous rookie or a peace officer with a quota to meet or . . . well, even by a human being. But by a camera. A camera with perversely rigid views in re. traffic laws. Views arrived at through no fault of its own, I hasten to add. Alas, that doesn’t make my tickets any easier to swallow.

Since they were installed on Phoenix-area highways a couple of years ago, the “speed enforcement” cameras have sparked controversy and don’t-tread-on-me acts of resistance–often perpetrated with humor, as with the freedom fighters who covered up some of the cameras’ lenses with silly string while dressed in Santa Claus outfits, and sometimes perpetrated with blunt violence (hatchets seem to work well). I am not, obviously, an uninterested observer in the debate over whether the speed cameras are a good idea. Nevertheless, allow me to outline the brief-it need only be brief-case against these pestilential tools of tyranny.

Begin with my case, or rather cases: I don’t remember where precisely I was or what precisely I was doing when Camera #1 clocked me doing 67 in a 55. But I had just received that citation in the mail when I got nailed by Camera #2, and I remember that one well. Traveling southbound on Squaw Peak (er, I mean, Piestewa Peak–“Squaw” having recently been discovered by Anglos to be an offensive term) Freeway in the early evening amid the usual heavy springtime Valley traffic, I found myself in the leftmost lane with my exit coming up in one and a half miles. Knowing that I needed to get over, like any sane highway driver I decided not to slow down to, say, 45 or 50 mph in order to let the long line of cars in the lanes to my right go by, but instead tapped on the accelerator just enough to get a safe lead on the car that was sitting in my passenger-side blind spot. As I switched lanes, I looked right into that camera lens and saw the flash go off. (And let me tell you, friend, if a camera can mock, that camera mocked me.) Sure enough, when I looked down the speedometer read 65; at my fastest I had been going, I figured, 67 or 68. And was the limit 55 here? Yup. This fact, plus my speed, were kindly confirmed by the letter that arrived from the Arizona State Department of Public Safety, Automated Traffic Enforcement Division, a few days later.

Now, I don’t expect anyone to cry tears of sympathy for my plight, but c’mon. No cop in his right or even wrong mind would ever have pulled me over and cited me for my little lane-change maneuver. The same basic move is employed by thousands of drivers every day in our nation’s great metropoli. But when I go to traffic court to fight this ticket in a couple of months–assuming that the state serves me in person; until it does, I have no legal obligation to respond–I will not have the opportunity to face my accuser. A seemingly minor custom in our legal tradition, I suppose, but one to which I cling with irrational exuberance. Yes, I will be able to explain what I did and why I did it to some impatient and skeptical judge, but why should he believe me? He won’t be able to measure my claim against a policeman’s words and body language, won’t be able to rely on his knowledge of the officer’s character and usual conduct (“Johnson is an ass; I’m sure he’s screwing this guy,” or “This guy’s impugning Smith, my poker buddy and a god-fearing man; I’m throwing the book at him”) as a gauge of my honesty. We’ll have removed one-half of the human equation. I suspect that that will leave everyone happy but me.

Small-bore stuff, you might say. Special pleading. Hey, I confess it. But the widespread anger aroused by the speed cameras reveals that there is much more at stake here than a few citizens, like me, with axes to grind. More at stake, even, than the disappearance of customary legal safeguards. The cameras arouse fear of Orwellian, state-controlled secret surveillance, of course. And to protect my credibility, I should insert here a cosmopolitan sneer at such fears, but I won’t. I share them, even as I am grateful for the perpetual and perfectly predictable incompetence of our elected officials and unelected bureaucrats.

More than that, though, the cameras arouse rage because they force one to realize (and for some people, this really is a new realization) that the government is not our government–that it is an institution manifestly alien to “us,” an institution that pursues its own aims and ruthlessly follows its own logic. How else, indeed, can one interpret the substitution of mechanically applied technological surveillance for prudentially pursued human law enforcement? Did anyone ask for that? The cameras’ supporters, besides making all the usual arguments about “safety” (arguments that unfortunately carry a lot of weight with many folks), point out that the cameras are a great revenue producer for the state–especially important in these times of great budgetary troubles. They seem oblivious to how this argument only stokes opponents’ rage further. We the people have instituted a government, not a self-perpetuating bureaucracy that is free to abrogate the liberties of those whom it supposedly represents–even for money. If the people won’t allow themselves to be honestly taxed enough to support the services they desire (or that the state wishes to provide for them), the state’s response should not be to act like a corporation fanatically searching for alternative revenue streams. But that is where we are.

Many other arguments can and have been made by the cameras’ opponents, but they all boil down to the idea that the use of these cameras represents, in nontrivial ways, a grave misconstrual of the proper relationship between a people and their alleged government. As a result, the people, or a good number of them, are pissed. How heartening! There is a bill in the legislature that would remove the cameras in 2010, and there are efforts underway to put the cameras to a vote through another quaint populist legal tradition: initiative and referendum. If that doesn’t work, there’s at least one other tradition of the American West on which to fall back: the fine and noble tradition of the monkey wrench.

History’s Long Road to Tyranny: Tocqueville and the End of Equality