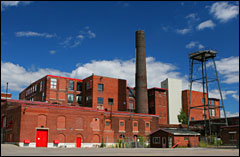 Mark Thompson has penned a challenging broadside against skeptics of free trade, including me, and he makes a number of arguments that deserve to be answered. There does not seem to me to be much to the argument that commerce and trade do not weaken distinctions between different local and regional cultures. Clearly, they do, and I think it is clear through the networks of dependence that trade creates that local economies suffer the same atrophying effects as local cultures, all of which expose the people in these localities to greater disruptions when those networks break down or demand dries up. Localists tend to take for granted that dependence on distant centers of wealth and power, which the interdependence at the heart of globalism requires, is antithetical to a decentralized political and economic order. I can imagine why someone might want to reject such a decentralized order, but I simply don’t see how someone maintains that it is compatible with the results of globalist policies.

If regional differences remain in the U.S., they are much less pronounced today than ever before thanks to a combination of mass mobility, technological advance facilitating rapid transport and communication across the continent and shared consumer culture. Minnesotans may not eat fatback and Vermonters may not eat rellenos, but everyone is importing the same pork from the same factory farms in the Midwest, and perhaps the less said about the homogenizing effects of the national Buffalo wing phenomenon the better. We are steadily moving towards the economic, cultural and political monoculture that Thompson claims we are avoiding.

Cultural homogenization on one level has advanced rapidly as transplants relocate from place to place, the highway system has reduced barriers of time and space between different parts of the country and television and radio have steadily eradicated distinctive accents in mass communication, which gradually eliminates them from everyday life as well. At the same time, there has also been fragmentation and dispersion as people have tended towards identifying with others who have similar lifestyles and tastes, so that they can pretend that they belong to non-localized “communities” while becoming steadily more alienated from their actual neighbors. Considering this, Charles Murray’s assumption that the institution of community is somehow being kept “robust and vital” in the current American model is questionable. For Murray, it is necessary to assert:

“Community” can embrace people who are scattered geographically.

This doesn’t seem true at all, but it is the sort of “clarification” that one has to make to defend the model as one that strengthens, rather than enervates, communities.

Thompson is on shakiest ground when he writes:

I assume this is a sharp bit of polemical rhetoric, or perhaps a joke, because I don’t see how Thompson can’t really understand that depriving a local economy of investment capital makes it impossible for a town or region to just keep “making things.” The communities and regions most adversely affected by the effects of trade agreements are not going to have the time or resources to keep “making things” as they once did, not even on a reduced scale, but either sink into recession or retool entirely to try to pull in other industries.

Localists may not like many of the disruptive effects of “creative destruction,” but I think it is safe to say that we understand the need for incentives and, yes, some profit for economic enterprises to endure. Indeed, I am bit baffled by this entire passage. It is as if those of us critiquing free trade regimes think that people are not self-interested and do not respond to incentives, but that they are all altruists with a built-in overdeveloped sense of solidarity with their neighbors. On the contrary, it is because we know that they are not automatically the latter that there need to be measures that guard against unduly cheap competition from abroad and policies that encourage or reward companies for relocating operations overseas should be resisted. Of course, we are not interested in people making things just to make things as a hobby, nor do I think most of us are interested in people making things that no one is willing to buy at a good price, but we are instead interested in local economies that do not need to rely nearly so much on vast networks of transportation and supply.

For the record, I don’t think the nature of a polity’s trade policies necessarily makes it more or less likely to go to war, just as I don’t believe for a minute that democratization makes states more peaceful. As with democratization, which has tended to intensify and prolong international wars thanks to factors of mass mobilization and total warfare, I think trade policies that create greater interdependence may make small wars by great powers more frequent and they do not make wars between great powers any less likely. Theorists of democratic peace cannot make sense of the war between the two most thoroughly democratic polities of the mid-19th century (the Union and Confederacy), and theorists of an economic liberal peace cannot account for that war between two parts of what had been an enormous free trading zone. One might as well craft a theory of international relations that cannot explain the origins of WWI–such a theory would be essentially useless. If shared economic interests through trade discourage certain conflicts (a British-American war over Venezuela in the 1890s, for instance), they create, widen and escalate others. Europe has not suffered another major continental war since 1945 in large part because it served as the effectively occupied territory of the superpowers for half a century, and continues to live under the protection of U.S. security guarantees, all of which has sublimated European security competition between major states. The fairly artificial and (presumably) temporary U.S. guarantees permitted the creation of the EU, but there is no guarantee that such a trade zone would have precluded warfare or ensures that there will not be renewed warfare in Europe in the future.

On the other hand, part of overseeing the convergence I mentioned earlier involved the maintenance of U.S. hegemony, which has involved several significant foreign wars and numerous smaller military interventions over at least the last thirty years. As Bacevich says in The Limits of Power:

The chief responsibility [of the “indispensable nation”] was to preside over a grand project of political-economic convergence and integration commonly referred to as globalization. In point of fact, however, globalization served as a euphemism for soft, or informal, empire.

Naturally, the focus on global governance came at the expense of local and national security:

Odd as they may seem, these priorities reflected a core principle of national security policy: When it came to defending vital American interests, asserting control over the imperial periphery took precedence over guarding the nation’s own perimeter.