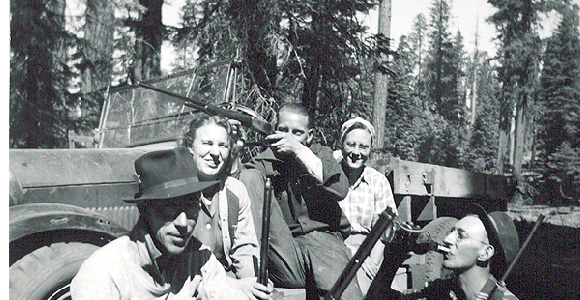 This past weekend, I was pulled away from the computer, from a sprinkler system that needs to be fixed, from a garden wall that needs to be built, from grading papers and tests, and from all the other vicissitudes of my life as a hopefully middle-class, home-owning, academic professional, to go on a Boy Scout campout with our church’s troop. The big appeal of this particular trip? Guns.

I was not raised in a hunting family. My paternal grandfather was a hunter–and there were the antlers and an honest-to-goodness moose head on the walls of his home to prove it–but the hunting life he lived in the mountains and valleys of Washington, Idaho and Montana in the 1940s and 50s weren’t passed on to his children. Though considering the fondness many of my extended family have for fishing, I guess strictly speaking it wasn’t the mere idea of obtaining and eating wild game that failed to make the leap from one generation to the next: it was, quite specifically, shooting animals, and really just shooting period that just didn’t quite take. My father told me about going with his father, just once, on a deer hunt, and finding himself disturbed and sad at the death which brought them the venison they later are, and resolving right then not to partake in such activities further. The result was that my father’s rifles and pistols–he has a half-dozen or so–were rarely used around our home, and we grew up mostly unfamiliar with how to use a scope or clean a barrel. My older brother Daniel did receive a .22 hunting rifle for his birthday, and my grandfather employed him to shoot gophers on his property, where cattle and horses (depending on the season) were set out to graze. He paid him a quarter for every tail he brought in. But he essentially taught himself how to shoot, and none of the rest of us gained even that much knowledge. I went gopher hunting with him one afternoon; he came home about $2.50 richer, while I got nothing.

Though I live in Kansas now, I think my experience was pretty similar to that of most of the boys in our church’s troop. Some shooting at Scout camp, perhaps; maybe a grandfather or an uncle or other relative who are serious hunters; probably some relatives who served in the military as well. But, broadly speaking, they just hadn’t done much with guns. And the announcement that this Scouting trip would include target practice with a wide range of firearms, the boys came from out of the woodwork to get on board. And not just boys either: we had adults that hadn’t shot much at all in their lives who wanted to sign up and come along. One of the participants was a dentist in our congregation who had a beautiful .270 rifle, one that he’d never used, though he’d owned it for seven years. Why’d you buy it if you don’t even hunt?, I asked. Well, in case the bad times come, I’ll need to be able to kill a deer to feed my family…besides, he asked me back, shouldn’t everyone have a gun?

It’s a fair question, one that my feelings have changed on. When I was an undergraduate and still exploring my new-found realization that my politics ran to the left rather than the right, I figured it was obvious that America would eventually have to get serious–really serious–about controlling access to firearms. I’d just returned from two years of living in East Asia, where, whatever other legitimate complaints might be made about life in that part of the world, violent crime and gun deaths are far, far, far less common than in the U.S.; to me, the issue was cut and dried. Though interestingly, one of the strongest advocates of gun rights I knew was a convinced Marxist–he wanted to make sure it wasn’t just the rich corporations that would be able to arm themselves when the revolution came.

I never quite came around to his point of view, but I did the next best thing: I spent ten years living in Virginia, Mississippi, and Arkansas. And more than that, I got over my youthful cosmopolitan liberalism, and began to re-acquaint myself with the better, more localized, more authentic leftist tradition America had to offer: namely, populism. And the populism which emerges from the American West and South and Midwest…well, it’s not entirely tied up with the “gun culture,” which I’ll happily grant is often poisoned with an unthinking or even abusive misogyny and drunkenness and violence, all of which is often a source of real, all too often terrible, harm. But the connection between a tool that can help you feed your family and protect your property, and the populist notion of people being able to be, to whatever degree possible, sovereign in their own places, is nonetheless real. Hence, to be unreasonably hostile to the very fact of guns is to be suspicious and hostile to every father (and yes, it is mostly still fathers) who takes his son (and yes, it is mostly still sons) out into the woods to teach them about how to use this very important tool. And suspicion is no way to run a democracy.

Such were the thoughts that ran through my mind as some of my fellow church leaders and Scouters laughing took into upon themselves to teach their neighborhood liberal (and yes, that’s their name for me; trying to explain that I use “liberal” only as an adjective rather than a descriptive noun, that I’m really more a communitarian or socialist or Christian democrat…well, it just wasn’t worth it) how to load and clean and shoot. To be frank, I stank at hitting anything, but I insist I wasn’t the worst one out there. The .22s we mainly left for the younger boys; the older ones we allowed to use–after proper training, I assure you!–the .243, .270, and .30-06 caliber rifles, the .357 Magnum snub-nose (I particularly liked that one, though one of my friends referred to it as a “pansy” gun), the 9mm semi-automatics, even the beautiful old .45 Colt one fellow brought. We also all did some skeet shooting with shotguns, and even fired a few rounds off on the ridiculously expensive semi-automatic rifle that one of the adults on the trip brought with him. I know, I know–the way to tell the difference between men and boys is the price of their toys; I know the saying. Well, it’s not $2000+ that I’d spend, I can tell you that much. But at the same time, I suspect that blowing apart a target with that thing was a lot more fun than anyone could have had on a Wii.

I’m not sure what the point of all this is. My wife and I still have no plans to bring guns into our home; that’s just not something we’re comfortable with, I suppose. (My wife didn’t sign up for the Million Mom March while we lived in Washington DC for nothing.) And I’m no less suspicious than before of the National Rifle Association and all the paranoid nonsense they regularly spread to enflame gun owners into panicked buying sprees and foolish voting choices. (As if Obama’s primary plan for rescuing the nation’s banks depends on taxing ammunition at 800%.) But if nothing else, it was another element of the “crunchy” life, another element of a life which obliges oneself to get past the supposedly orderly and pristine world we’ve levereged and consumed ourselves into accepting, and dig deeper into what it means to be familiar with the basic tools and skills of self-preservation, that I’m glad to have exposed myself too. In all likelihood, the majority of the people reading this are, like me, professionals and academics and office workers, and you don’t know much of anything about guns, except that you want to get them off the streets. Well, fine; I do too. (Concealed carry permits are their own separate issue.) But in the meantime, get some knowledge here–some knowledge about guns, of course, but also, and perhaps more importantly, some knowledge about the men and boys (and, yes, women and daughters too; one friend of mine takes his oldest daughter with him boar hunting every year) whose lives and families and histories have been shaped by guns, like my grandfather’s was. It may not get you a moose head on your wall, but if nothing else it may mean that you’ll be able to relate better to, and hopefully be more neighborly towards, the fellow down the street who produces that fine rabbit stew.