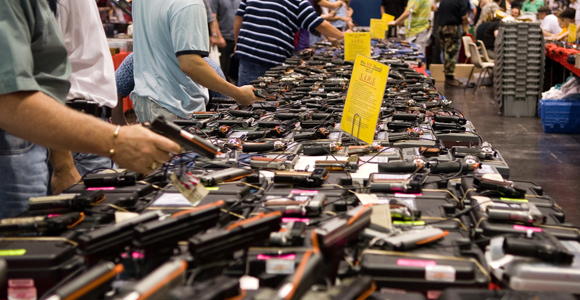 BURNED-OVER DISTRICT, NY–Now that Russell has smuggled firearms onto the porch I suppose it’s only a matter of time before the BATF calls it a “compound.” Until then, herewith, via The American Conservative, a piece on my visit to my favorite gun show:

The Super Bowl is a mere anticlimax to the February edition of the triannual Alexander Gun Show, held earlier that day in a volunteer firemen’s hall a mile south of the home of the late Barber Conable, the statesman who represented us in Congress for 20 years. Conable was a poetry-reciting antiquarian Iwo Jima vet who used to scour the show looking for Indian arrowheads to add to a collection he had begun in boyhood. Now that was an American.

The phrase “gun show” reduces Ellen Goodman readers to enuresis. Yet Alexander is basically a rural swap meet, as friendships are renewed and shotguns and ammo vended or traded of a Sunday morning. (The attendees have all gone to 7 o’clock mass, I’m sure.) Alexander Cockburn once wrote in the Nation that the populist Left ought to talk to the folks at gun shows; genuine democrats would come away refreshed by an encounter with working and rural citizens who are pro-Bill of Rights, anti-corporatist, and open to radical alternatives. Gene Debs and Huey Long and Norman Mailer would dig Alexander; a Democratic Party financed by Wall Street and choreographed by upper-middle-class hall monitors barely countenances these peoples’ existence, though the lackbeards navigating the crowded aisles looking for a good cheap hunting rifle will make perfectly suitable corpses in whatever wars the think-tank commanders are drawing up in their tax-exempt covens.

I don’t hunt, but my dad is an NRA member, and I grew up in a gun culture whose rate of violent crime is equal to the number of farmers in President Obama’s cabinet. Contrary to the lurid imaginings of Beltway advocates of gun control–recently euphemized to “gun safety”–in Alexander I saw nary Crip nor Blood nor sullen stringy-haired school sniper in a Slipknot T-shirt stocking his armory.

I stop to chat—chat: what an epicene verb in this context!—with Mark Shephard and his parents Barb and Ken at their customary table. Shep has been my friend since I was 5 years old. We laugh about a previous Gun Show/Super Bowl Sunday, when, glutted on chicken wings and Genny Cream Ale, we watched Scott Norwood’s 47-yard field goal sail wide right in the 1991 game, which carved out a regional slough of despond later visited by the right-wing Calvin Klein model Vincent Gallo’s film “Buffalo ’66.”

Shep and I spent every other fall day of 1972 visiting McGovern headquarters in Batavia and stuffing our pockets full of “Remember October 9” buttons. He never stopped collecting.

So at Shep’s table I buy a button for Charles Goodell, the last U.S. senator from Upstate New York, who was appointed in 1968 to succeed assassinated Sen. Robert F. Kennedy. (Goodell’s son, Roger, commissioner of the NFL, will hand out the Super Bowl trophy that night.)

Charles Goodell was a native of Jamestown, which also produced Roger Tory Peterson, 10,000 Maniacs, and Lucille Ball–not bad. In the humanely flighty tradition of his hometown, Goodell joined the quasi-pacifist Oregon senator Mark Hatfield as the loudest anti-Vietnam War voices in the Republican Party.

Alas, as an Upstater, Goodell was too low-caste to ever win a statewide race. He proved to be a seatwarmer between carpetbaggers, as he lost a three-way race in 1970 to Connecticut’s own James Buckley, who enjoyed birds quite as much as Roger Tory Peterson had but thought the Vietnam War just ducky.

Buckley fell in 1976 to an actual New Yorker, Pat Moynihan, for whom I toiled in magnificent ambivalence, but DPM gave way to yet another carpetbagger, the militaristic schoolmarm herself, who resigned the seat to exercise her diplomatic muscle.

To his great credit, accidental governor David Paterson, in replacing Hillary, passed over heirheadess Caroline Kennedy and son of a bastard Andrew Cuomo to choose Kirsten Gillibrand, a pretty blonde pro-gun, anti-bailout Hudson Valley Democrat who might make a decent ticketmate with Sen. James Webb or Jon Tester in 2016. If, that is, she is not Goodelled in 2010, for Rep. Carolyn McCarthy and other metroliberals driven by hick-hatred are threatening a primary. Senator Gillibrand’s devotion to the Second Amendment will be sorely tested over the next two years—her colleague, the beyond egregious Chuck Schumer, has undertaken to educate her on the matter—but if she sticks to her guns, so to speak, the freemen and women of Alexander will have the odd sensation of Senate representation by someone who has not only been north of Yonkers, but has seen, up close, such rural exotica as a maple tree, a cider press, and a Methodist church.

I drive home from the gun show under the heatless midwinter sun singing along with the car radio to the touched Scott Walker’s tristful “The Sun Ain’t Gonna Shine Anymore.” I don’t know: maybe it will.