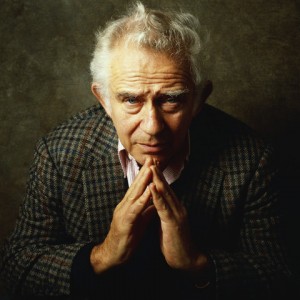 BURNED-OVER DISTRICT, NY–One of the precious and few political campaigns in recent years to embody Front Porch (or, rather, front stoop) principles was Norman Mailer’s 1969 candidacy for mayor of New York City. John Buffalo Mailer, his son, has a fine essay on the old man’s run in the American Conservative (www.amconmag.com/article/2009/may/04/00014). Herewith, via First Principles, my piece on Brooklyn’s favorite fugging son:

In 1969, Norman Mailer, the dukes-up bard of Brooklyn and a self-proclaimed “left conservative,” undertook a campaign for mayor of the city that had, seven decades earlier, swallowed his borough of homes and churches. Competing in the Democratic primary against a quartet of machine hacks and standard-brand liberals, the novelist-pugilist got clobbered. What do you expect of an electorate that has filled Gracie Mansion with the likes of Abe Beame, Ed Koch, and Rudy Giuliani? But Mailer ran a race that carved out a path that we would do well to follow today. I don’t believe that any municipal campaign of the last century has been packed with such radical spirit and reactionary sense.

Mailer averred that he was to the left of the liberals and to the right of the conservatives: wisdom’s place! He diagnosed the modern malady: “The style of New York life has shifted since the Second World War (along with the rest of American cities) from a scene of local neighborhoods and personalities to a large dull impersonal style of life which deadens us with its architecture, its highways, its abstract welfare, and its bureaucratic reflex to look for government solutions which come into the city from without (and do not work)…Our authority has been handed over to the federal power. We expect our economic solutions, our habitats, yes, even our entertainments, to derive from that remote abstract power, remote as the other end of a television tube. We are like wards in an orphan asylum. The shaping of the style of our lives is removed from us—we pay for huge military adventures and social experiments so separated from our direct control that we do not even know where to begin to look to criticize the lack of our power to criticize….[O]ur condition is spiritless. We wait for abstract impersonal powers to save us, we despise the abstractness of those powers, we loathe ourselves for our own apathy.” Has any candidate in postwar America been as eloquent? (Mailer’s essay, “An Instrument for the City,” reprinted in Existential Errands, is a brilliant and shamefully neglected decentralist manifesto. If only NYC had listened to Mailer, Paul Goodman, and Dorothy Day instead of John Lindsay, Robert Moses, and the New York Times.)

The centerpiece of Mailer’s campaign was his contention that “our city must become a state.” The hour was late. “New York City is today a legislative pail of dismembered organs strewn from Washington to Albany,” he wrote, viscerally, and the only way to sew up and reanimate the corpse was through radical devolution of power. Seeking a “hip coalition of the left and right,” and understanding that his promises to “free Huey Newton [and] to end fluoridation” might not be glue enough, he proposed to make New York City the 51st state of the union. As campaign manager Joe Flaherty wrote in his hilarious account of this electoral knight errantry, Managing Mailer (1970), the novelist eschewed the trivial and tedious financial arguments and emphasized instead that “by going through the process of acquiring statehood, [New Yorkers] would have a rebirth, a rediscovery of the soul.”

There would be no inane happy-talk about the “family of New York” from Norman Mailer. He realized that “the good farmers and small-town workers of New York State rather detest us.” Rather indeed. “The connection of New York City to New York State is a marriage of misery, incompatibility, and abominable old quarrels.” His concern was properly with his own brawling grounds, but he did see a favorable fallout for we hicks as well, for going it alone could spark “the development of what has been hitherto a culturally undernourished hinterland, a typically colorless national tract.”

“Power to the Neighborhoods!” was Mailer’s secondary slogan. (Newspaper reporter Jimmy Breslin, Mailer’s running mate as candidate for president of City Council, suggested that it be changed to “wisdom of the neighborhoods” lest the word power scare off the middle class.) Stormin’ Norman wanted to abolish the city government and permit blocks, tracts, sections to manage their own affairs. Soho, Harlem, Bensonhurst: each neighborhood would be responsible for its own welfare, trash pickup, fire protection, parks, education, policing, etc.

Out of the hard work of self-governance would come cultural renewal. “I am running on everything from Black Power to Irish Self-Righteousness,” he told an Irish Club in Park Slope. (His published speeches, with such interlarded remarks as “Shut up and fuck you! Let me talk,” will never be confused with those of Barack Obama or the Bush dynasty.) The possibilities for true diversity were dizzying: Mailer suggested that Harlem might declare a holiday for Malcolm X, while Staten Island honored John Birch. One neighborhood might require church attendance, while another mandated serial sex. As he told an audience at Union Theological Seminary in a precocious rebuke to political correctness, “People are healthier if they live out their prejudices rather than suppressing them in uniformity.”

“I’m running against urban renewal!” he exclaimed, which is to say he was on the side of beauty, poetry, sentiment, history, and, in a city which destroys everything it does not commodify, losers. His secondary planks—for instance, the Flaherty-inspired call for a world series of stickball to be played in the Wall Street area—shone with a luster that the John Lindsays and Times editorialists could not even appreciate, let alone mimic. Even his running mate didn’t get it: after a chaotic Village Gate rally, Jimmy Breslin said, “I found out I was running with Ezra Pound.” Since decentralism is the diametrical opposite of fascism—a centralized state and economy—Breslin’s Mailer-Pound comparison is on the order of linking Paris Hilton and Stephen Hawking. Hey, their surnames both begin with h, don’t they?

The election hadn’t a happy ending, but then what election does? Mailer won five percent of the Democratic primary vote, or about six times less than the winner, machine politico Mario A. Procaccino, who would go on to lose to Liberal incumbent John Lindsay. But je souviens, Norman, je souviens. Free Brooklyn!