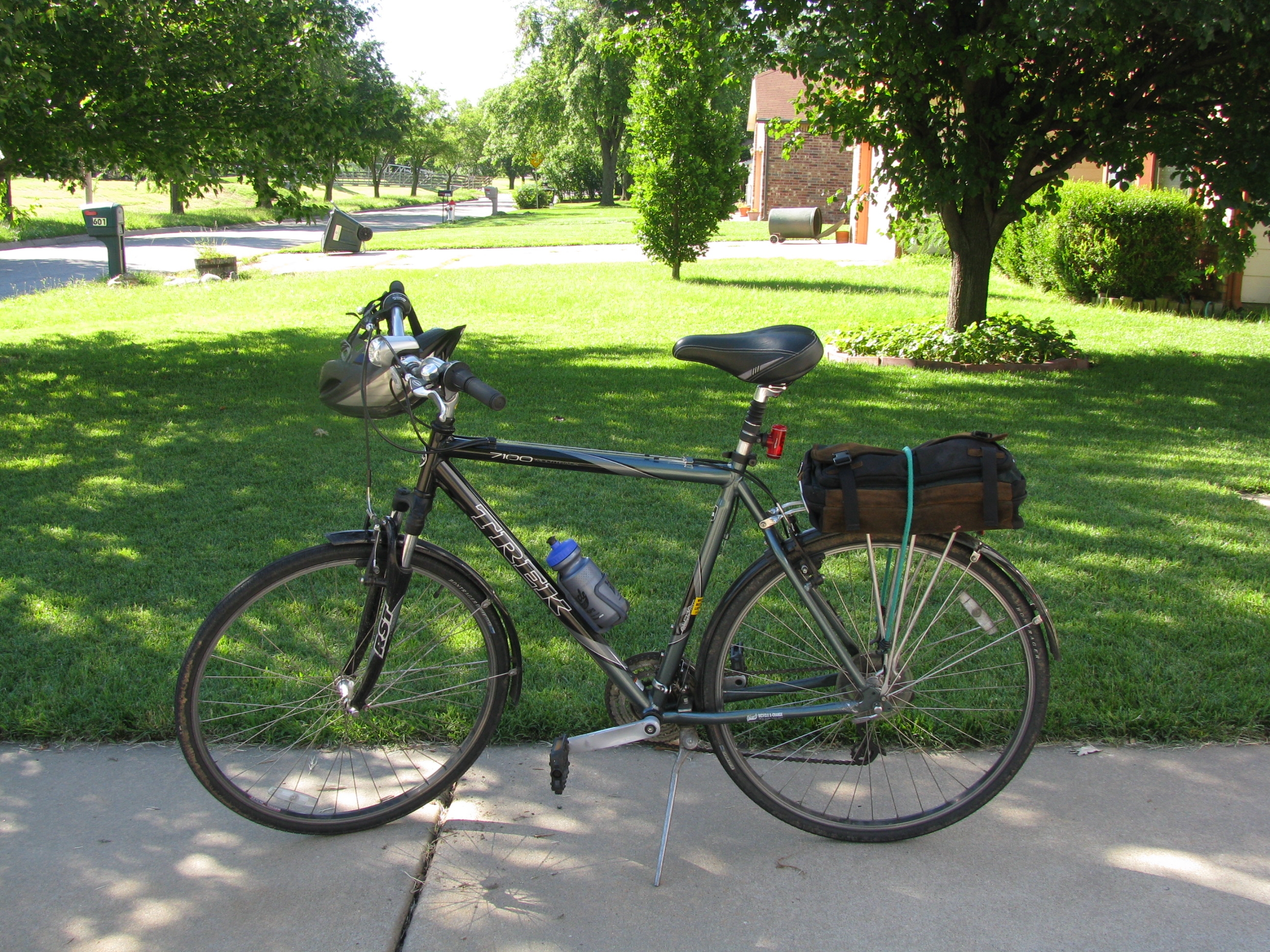 Nearly two years ago, John Buass, an intrepid fellow blogger and bike commuter (more: a genuine cycling activist) here in Wichita, shared with me an invitation he’d received to write something for a book tentatively titled “Bicycling and Philosophy.” I ended up sending in an abstract, because the notion of writing for one of these “[Blank] and Philosophy”-type volumes that I see all over the place appealed to me. As it turned out, the editors liked my proposal, asked me to turn it into an essay…and now, at long last, the book is available at your local Borders. I kind of feel bad, because I only learned about this whole project through John, yet his name is nowhere to be found in the final volume. (Let me give you my complimentary copy John, at least!)

If you absolutely can’t wait, you can read my chapter here. Not the best bit of writing I’ve ever done, I think, but not bad overall. This passage is probably the heart of my claim, which is that choosing to make a bicycle one’s primary mode of transportation (which, of course, also means organizing one’s life around, and getting involved in one’s community so as to make possible, such a choice in the first place) is, in the complex and automobile-centric societies in which nearly all of us live, a complicated one…and yet that very complicatedness is part of what makes

What’s the point of trying to live simply? I would say the point is to exist in an environment which isn’t likely to multiply out of one’s control, making one simultaneously dependent upon and divorced from those complex forces, actors, and decisions which shape one’s options. That is, a world where one can see clear through from basic personal choices to more or less dependable results, both personal and public. Of course, the world is never really going to be like that: human life is an often random, frequently tragic, always unpredictable existence….But nonetheless, some environments lend themselves to being “enclosed” more easily than others, and said enclosure doesn’t just mean retreating from reality: sometimes it means cultivating the better parts of it.

For example, look at your bicycle. It is, to be sure, an impressive and demanding piece of technology, with brakes and sprockets and derailleurs all needing to be properly tended to. But that finite number of parts are all available in open sight, requiring but also readily responding to simple, everyday, basic acts of maintenance. Compare that to the kind of complex, often hidden mechanisms which lay buried, sometimes inaccessible, under the hood of a car, requiring expert (and expensive) work to keep in running order….This is not to say that the mechanics of the internal combustion engine cannot be “enclosed,” to a degree mastered, and thus made reliably responsive to the engagement of any given driver; cars, too, can be made “simple.” But it is much more difficult, and thus much more unlikely, that the typical driver will be able to reach that point. With bicycles, simplicity, the ability to see a project through from beginning to end, is much more in reach.

I’ve written a great deal about “simplicity” over the years, some of which made it into this essay. As the years have gone by, it’s become more and more clear to me that while my ideas about simplicity are certainly grounded in a kind of aesthetic appreciation of the freedom a life only minimally-troubled by complexity makes possible, as well as an environmental desire to avoid the anticipated and costly impacts which ever-expanding (and usually ever-commercializing) complex economic systems involve, my real motivation is strictly political. A simple life, in my view, is one that is, as much as possible, self-sustaining, in a word sovereign–meaning not wholly dependent upon forces and actors (technological, economic, social, etc.) beyond oneself and one’s own immediate community. A bicycle doesn’t automatically bring such a life into existence. But I’m not the only one who has taken to riding a bicycle and grasped the connections which it reveals.

If I could write the essay over again, I would definitely remember to include a quote which I left out before: “Socialism can only arrive by bicycle,” a quote attributed to the Chilean socialist politician Jose Antonio Viera Gallo. What he could be talking about there? Maybe the same thing Gandhi was talking about when he described the spinning wheel as the crucial tool of political independence for India. Developing and institutionalizing a broadly available and generally basic means of production which was entirely capable of being managed by ordinary people would have dramatic consequences for the economy of India, which was then essentially just a component in the larger complex system which was the British Empire. Similarly, turning to a technology and an attendant way of organizing one’s transportation needs and one’s places of work and living which is, on the one hand, enormously empowering for the poor, but on the other hand, also not so easily dominated by all the industries and interests and commercial imperatives which our car-dependent societies demonstrate well…that would be radically simplifying as well. Complicated, to be sure, and given the compromises which come along with modern bourgeois life, never likely to be complete. But every bit helps. Not to help bring into existence a state of bicycling fascists, but to help bring into existence a society where more people can get along and get to where they need to go without traveling so far, so expensively, so riskily, so congestedly–and, when one’s car starts making that little pinging noise which drives you crazy and you have to take it in to the shop and you get the bill afterward for some seemingly (but not nearly) simple problem, so frustratingly! If that’s socialism, well, sign me up. Call it “autarchy” if you will, but in the end, whatever the different philosophical routes involved, the results are much the same: you arrive at place where independence is connected to more people being equally familiar with their place and their capabilities, thus making it even more meaningful and fair. With some smart civic planning (some bike lanes and paths, some closed off city centers, and maybe, just maybe, some bike racks at public places for Pete’s sake!), some personal commitment, and some luck, it’s possible for people to get away from automobile dependency, to rediscover the virtue of walking to school or work or church and almost anywhere else. And, when those things are a little too far away, despite your best efforts…that’s why God invented the bike (and why smart countries make as much use of it as they can).

Of course, in framing my fondness for my bicycle (I’m pretty certain I’ve passed 5000 miles by now in my regular commute from home to work over the years here in Wichita) in these “foreign” and “socialist” ways, I risk losing whatever gains bicycling has made in the U.S. by sending up (literal?) read flags, bound to attract defensive and ignorant attacks against the idea of making America more “European” and therefore less attached to its supposedly God-given (and destructive) car-culture. Well, look. It’s undeniable that, in a country the size of the America, bicycling is going to remain a minor component in the lives of the great majority of families (we certainly haven’t put as many miles on our bikes as we have on our Toyota Sienna!). So what is the harm of recognizing that if, in certain times and certain places, you have enough people who recognize the appeal of a simpler, less expensive, more self-sustaining way of life, choose to adopt it, and want to make it easier for others to adopt as well. None at all, I think. To shy away from such confrontations isn’t just ideological cowardice; even aside from such “culture war” concerns, the truth is unless people stand up for the compromise which bicycling promises, the bureaucrats will win (keep up the good fight, Jacob!). Very simply (in more ways than one!), the bicycle works. So read the book, and if you live somewhere you can ride, do so. Who knows? Could be your happiness depends upon it.

David Byrne tells us to Ride our Bikes