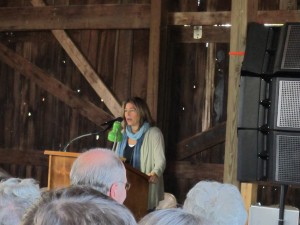 A couple of weeks ago some fine intellectuals, political figures, journalists, and activists associated with this blog gathered together to talk about localism, and specifically how one might discover in our local communities resources for pursuing the common good in an age of globalization. I wish I could have been there. But at the same time they were meeting in Emmitsburg, MD, I was spending time with some students in Salina, KS, listening to Naomi Klein and a couple of earnest agronomists and botanists, and in a sense they were all talking about the exact same thing as was being discussed at the Front Porch Republic conference: how a particular sort of local work and community investment is inseparable from any serious pursuit of that which is the common good of us all. So perhaps, ultimately, I didn’t miss anything at all. In any case, it was a delightful day. 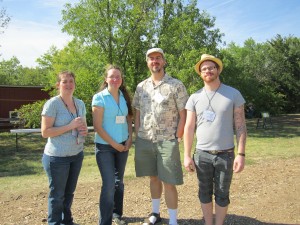 This is the second year that I’ve made it out to the Land Institute‘s annual Prairie Festival, and like last year, which featured a presentation by Wendell Berry, I came away last Saturday with a dozen different ideas about how I could push my students to think a little more critically about how the food they eat, the cars they drive, and the lives they live all impact the natural environment upon which we depend, and either add to its potential sustainability or contribute to its destruction. That may seem like a somewhat stark distinction, but it was central to Klein’s presentation, and my students in “Simplicity and Sustainability”–a course I’ve invented and am teaching for the first time–needed to hear that starkness, so as to perhaps shake them out of their complacency, and maybe even help them recognize that the simplicity I’ve been trying to point them towards is being undermined by the ever more abstract and complex (and self-justifying) systems we allow to be constructed around us, or help to build ourselves.

Klein’s presentation was, in many ways, a tribute to starkness of vision: particularly that vision which characterizes global warming deniers of all varieties, whether they be the corporate powers that be or conservative foot-soldiers in the Tea Party. Klein praising the Tea Party? Yes, that’s what she did, repeatedly, in her hour-long presentation. Because, as she insisted again and again, “they get it.” They get that the stakes in this battle–a battle between, to speak broadly, essentially unrestrained technological growth on the one hand, and a fear for the trampling of essential limits, disciplines, and attachments which a fundamentally self-interested gospel of expansion teaches us to ignore on the other–are nothing less then our basic economic system itself. In their paranoid accusations against President Obama–that he is not “really” an America, or that he is some sort of radical post-colonial socialist at heart–reveal their confused but fundamentally sound grasp of the central matter: if the arguments which make the case for global warming are accepted, then our whole way of life–primarily, its reliance upon non-renewable energy sources like oil for easy mobility, cheap goods, anxious consumption, irresponsible levels of waste, and a casual and inattentive relationship with the planet we live upon and the food from it which we eat–must change. Capitalism must change. And that, Klein argued, I think rightly, is a stark challenge that most self-identified liberals (though maybe “neoliberals” would be a better description) and environmentalists just don’t appreciate.

Klein discussed the months she has spent researching her current project, a project that took shape most particularly through the BP Oil disaster in the Gulf of Mexico, where she said that, in looking at videos of that “hemorrhaging wound” in the ocean floor, she was struck more viscerally than she’d ever been before by how much collateral damage our highly technical, highly complex, global capitalist system is willing to allow to be built into into one or another corporation’s profit/loss statements. She said that she felt that the overwhelming message of that disaster is how pointless, and counter-productive, the technical efforts of many who simply want to modify our current extractive practices really are. Well-intentioned liberals and scientific experts, studying just how much of a temperature increase existing staple food crops can handle, geo-engineers thinking about ways to seed the atmosphere with certain compounds that could more effective absorb existing thermal outputs, talk about “solar radiation management”: it’s insane, Klein felt (and the crowd–a bunch of people who all believe in exploring what can be done with the planet, not to it–loudly agreed).

Such a mentality–the mentality of “green technologies,” and the promise of a transformation of our current consumptive patterns into ways of building and spending which can absorb all the changes we have unintentionally introduced to the planet around us–may have honorable intentions, but in the end it just leaves us all no different from those who drill the dirty deep-sea oil wells: it leaves us as mere consumers, finding entertainment and validation in our supposed individual ability to “slap mother nature in the face.”

And so, Klein called for starkness–for recognizing that global warming is not something that can be fixed or moderated or addressed by us; it is, rather, something that, if we want to survive as a civilization and a species, demands something of us. She said her tentative title for her next book is “What Climate Change is Telling Us About How We Must Evolve”….and she credits the global warming deniers for at least recognizing that demand for what it implies. In the same way powerful corporate interests attack unions, push for deregulation, insist on the legitimacy of their habits of consumption, praise globalization, denounce all forms of protectionism, and defend their wealth from the demands of the commons, they also fight the science of global warming tooth and nail–because to give it credence would be to invite a fundamental economic transformation, one that would undercut their position of privilege entirely.

What would that transformation entail? Not, Klein believes (and again, I tend to agree with her) a “green Keynesianism”–that kind of state-heavy redistribution, or even industry nationalization, may have its place in some areas of our social lives–and may even be have to be relied upon as the only tool powerful enough to turn the profits of the world’s largest energy corporations towards paying for the transition to come–but by and large that vision of the world would depend (as E.F. Schumacher presciently noted long ago) on the same sort of acquisitive, growth-centric capitalist mentality which created the conditions of the problem in the first place. And the needed transformation must certainly not, Klein insisted multiple times, take us in the direction of state socialism, which is the only economic system worse for the planet than a corporate-friendly free market (she noted with some humor that, looking at long-term environmental trends, the single best news which the planet’s supplies of breathable oxygen and drinkable water had received in the past thirty years was the collapse of the Soviet Union). No, what we need out of the necessary economic transformation which faces us is a recovery of the lost art of “decentralized planning”: of turning our knowledge of the planet towards diverse ways of tending to it, locally and sustainably. (If you think that sounds like a kind of anarchism or mutualism, you’re probably not wrong; Klein is enough of a radical democrat to be hanging out in New York City with the Occupy Wall Street crowd, arguing that there is something to be said for putting yourself bodily into a struggle, given that voting doesn’t always seem to be enough to make changes these days.) Which is what bring us around to the vital–and very practical, hands-on, and bodily–work being done at the Land Institute itself. 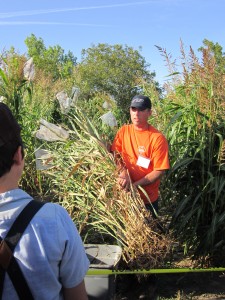 After listening to Klein, and speaking with some “sustainable community” organizers and urban farmers visiting from St. Louis, we took a tour with a couple of enthusiastic graduate students, who showed off to us all, and talked about the prospects for further developing, their experiments with sustainable agriculture. Their goal is to use such native perennials–often more commonly known as “weeds”–as Illinois bundleflower, switchgrass, Kansas sunflowers and others, as resource for creating hybrid food crops (grains and legumes, mostly, with particular attention paid to wheat and sorghum) that will require minimal irrigation, need few or no pesticides or herbicides, have deep root systems (thus cutting down on the soil erosion experienced during every harvesting season), and–most importantly–produce sufficiently high yields to be able to feed local populations without a heavy reliance upon the networks of contemporary agribusinesses. This is not, to be plain, easy or easily rewarded work. In attempting to work with only those resources that the Plains states provide (most of the work of The Land Institute is, of course, done in Kansas, but they have research programs working at locations in Minnesota and elsewhere as well), they are looking to turn agriculture away from the oil-based industrial basis that has been assumed as the only route to making it sufficient for current population levels and ranges for more than sixty years, if not longer. This doesn’t just mean developing more perennial options; it also means changing our expectations for food productivity and food consumption itself. (For example, one of the problems with Illinois bundleflower is that, though potentially a wonderful food staple, with a high nutritional content, a minimal environmental footprint, and excellent climate resistance, it tastes so terrible that most birds won’t even eat it.)

There have been successes, like the development of an edible perennial hybrid wheatgrass called Kernza. But those successes don’t come quickly or easily, and no one should expect them to: Wes Jackson, the founder of the Land Institute, has called the quest for sustainable agriculture a “10,000 year problem”. There is a reason why human communities the world over have, for centuries, been drawn to the appeal of cheap energy and rapid growth, even if such does involve them in increasing complex and corrupt economic and political systems which distance them from any real stewardship over the very goods and goals they were trying to achieve and produce in the first place. But in this little corner of north-central Kansas, there are people both talking the talk and walking the walk that a revival of sustainable, local, environmentally wise and democratically achievable stewardship. I wish I could have seen all there was going on at the Land Institute that weekend (see here for an additional write-up); I wish I could take my students up there every other week. I do think a liberal arts education in the principles and practices of politics, philosophy, religion, science, history, economics, and more is a good thing…but then again, this is Kansas, and learning a little bit more about how, seed by seed or provocation by provocation, we can wean ourselves away, or teach others how to get away, from a capitalism which is imperiling the globe and exchange it for the humbler work getting most of what human beings need from the resources they have on hand…well, that may be a better and more appropriate thing altogether.