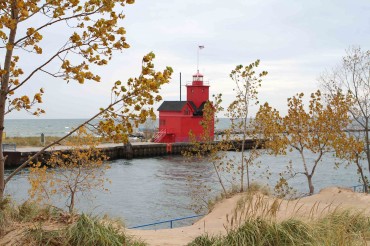 Holland MI. As if my beloved state of Michigan hasn’t had enough problems, we now have Republican presidential candidates skittering across our fair soil and bucolic shorelines, plugging up our phone lines with their computer-generated attacks, and ginning up shallow enthusiasm among our beleaguered citizens.

We have learned much from them. Mitt Romney observes that our trees are just the right height, and that he loves American cars so much he hopes they may long rule the world. Ron Paul has assured us that Michigan is worth saving. Rick Santorum happily noted that the “lifestyle” of people in Western Michigan was “worth preserving,” in much the same way as any museum piece. Thanks for that. We don’t feel condescended to at all.

Michigan’s (and they are Michigan’s) economic problems are obvious at the surface: a published unemployment rate near 10%; a decade-long loss of 860,000 jobs, or 16.9% of all jobs; chronic underemployment (the average annual pay for new jobs created last year is around $25,000); lagging markers in educational achievement; a sharp decline in population, particularly among the young and educated;¹ higher than average poverty rates; steadily declining productivity (it went up last year, but had nowhere else to go by that point); an absence of venture capital; an aging workforce with costly benefits; a landscape littered with empty factories.

Less obvious, but no less significant, are the fiscal problems: unfunded state government liabilities in excess of $66 billion, over $45 billion of which goes toward state employee benefits and pensions² (against $27 billion in assets, meaning the average Michigan taxpayer will have to pony up over $14,000 to cover the unfunded liabilities); a half billion dollar budget deficit, despite the state’s balanced-budget amendment; shady accounting that projects future funding solely on the assumption of risk-free high yield investments; a continual decline in housing values and high foreclosure rates; rapid increases in consumer insurance rates; significant comparative declines in per capita income; significant levels of bond and special revenue debt; significant declines in tax revenues.

Politicians in Michigan continue to promise they will solve the state’s structural and fiscal problems, but keep running into dead ends. Attempts to generate more tax revenue by creating new business taxes drove businesses out of the state. Increasing income tax rates only increased the burden on those who haven’t left. Finding new revenue streams has proved elusive, and the structural problems of the state’s financial system reverberate in many of Michigan’s industries as well. (In a subsequent article I will argue that Michigan’s problems stem from a faulty economic model at the inception. Let no one think I am simply bashing the feds and making a simple-minded argument for federalism. The states make their mistakes too, but if Michigan screws up it affects only the people of Michigan.)

Attempts to improve the state’s chronic unemployment problems which had crept over 14% created some quick fixes with long term liabilities. In my hometown of Holland, for example, LG Chemicals, armed with tax credits from the state of Michigan and stimulus money from the Obama administration (totaling nearly half a billion borrowed dollars), built a 650,000 square foot battery-producing plant on the city’s south side. In order to secure the bid, Holland’s city council agreed to waive all local taxes for 15 years, and state officials did the same. While the plant will produce 400 new jobs, its long-term success is predicated on the success of the electric car, and the President’s continued use of the bully-pulpit and tax incentives to prompt consumer activity. President Obama, in an effort to promote the program, has twice visited Holland in the past year. Nonetheless, Chevrolet has already cut their order by half due to lack of consumer demand.

The plant sits in an industrial area on what was once excellent farmland. In addition to the plant itself, the city has determined that it will need to complete 11 new road and bridge projects to improve “accessibility” to the plant. These roads and bridges are being paid for by a combination of federal, state, and local tax dollars. The City of Holland, with a population of around 30,000 people, has earmarked about $28 million in its 2012 budget for capital projects, mostly related to power, road maintenance, and water and sewer issues – costs that will surely be increased in the coming years as the battery plant moves into full operation.

Charles Marohn³ and his colleagues at the Strong Towns project have detailed what industrial development such as the LG battery plant means for cities such as Holland. While there is a short-term gain from the rush of capital investment, the long-term liability issues are passed off to future generations. Since the cities cannot generate the requisite levels of revenue to cover the maintenance costs, Marohn concludes that nationwide “we have a ticking time bomb of unfunded liability for infrastructure maintenance.” Whatever short-term financial benefits accrue from development are more than offset by these unfunded liabilities, which amount to more than $5 trillion. Marohn deftly demonstrates what would be required of local taxpayers to pay these liabilities, and its clear the plants can’t produce enough to cover the costs.

“Growth,” the quintessentially American elixir to cure all ills, has been funded, Marohn argues, by debt accumulation related to capital investment. Since tax revenues are never sufficient to cover maintenance costs, severe economic contraction can only be avoided by new growth; but there isn’t enough capital in the economy to fund that growth, so it can only be funded through debt, as indeed must be the case any time consumption exceeds production.

“This strategy is a disaster of monumental proportions for the United States. Not only have we created an entire economy based on a growth model that can’t be sustained, in the process we have highly indebted our population. The quality employment opportunities available for the masses rely solely on the perpetuation of this unsustainable model, so we can’t even work our way out of this mess. We’ve tied up our individual wealth into homes — homes whose value is tied to community infrastructure that we cannot afford to maintain without continued hyper-growth, which we are now powerless to induce. So as our wealth disappears ad our economy painfully grinds to a halt, we’re left with no options but to continue this path.

And to top it all off, we’ve tethered our national psyche to the suburban ideal we cll the ‘American Dream’, our auto-based utopia where everyone gets to live a faux version of European aristocracy on their own mini-estate.

Oh, and by the way, the American Dream, as so defined, is absolutely non-negotiable.”

A historical marker on Holland’s Lake Michigan shore hearkens back to two rock-ribbed Dutch principles that, Mr. Santorum notwithstanding, have not been preserved, as demonstrated by the city having gone all-in on the battery plant without ever once asking whether the project would generate enough tax revenue to cover the maintenance costs over several life-cycles. When the Reverend van Raalte, leader of the Dutch settlers and founder of Hope College, walked along the shore of Lake Macatawa out toward Lake Michigan, he was immediately impressed by the possibilities inherent in connecting the two bodies of water, so he applied to Congress for funds to dredge the sandbars and silt between the two. Congress refused appropriations: “Frustrated,” the marker notes, “the Dutch settlers dug the channel themselves.”

My Dutch forebears (my parents for that matter) believed you didn’t buy something unless you knew you could pay for it, and that anything would be more affordable if you built it yourself. I remember well the visible discomfort of my parents when, in their 50s, they got a checking account, meaning they wouldn’t be paying for everything with cash. The house they live in was built by my uncle, who dug the foundation and full basement by hand. Dutch thrift and a willingness to roll up one’s sleeves are how you make sustainable cities, how you form places that neither depend upon nor require usurious investments by outsiders who care nothing for the people or land but only for abstract statistical markers that will help them get reelected.

Or elected in the first place. As I listen to the candidates of both parties I am neither surprised nor amazed at how painfully thin and unimaginative their political rhetoric is. They offer the standard solutions: more growth, manipulate the debt ceiling, increase spending while cutting taxes (except on the rich, of course, ignoring what is obvious to everyone: the rich don’t have nearly enough money to pay for all this, even if we confiscated every dime they have, independent of the investment implications), decrease unemployment, improve education, blah blah blah. They have no solutions because they don’t understand the problems of a population that doesn’t know how to create or sustain a place. (Note: Marohn and his colleagues have put together five minimal benchmarks for making strong towns.)

Nor do they understand how they embody the problem. These perfectly coiffed slick-backed salesman with their bleached teeth and oleaginous manner blow into our towns, tell us what’s wrong with us, tell us how they’re going to fix it, how they’re going to help us grow, throw money at us to buy our votes, and then leave us with the bills, the ruined landscape, and the shattered neighborhoods. They come from nowhere and return to nowhere, bringing with them only a whirlwind of activity that blows through our towns, our villages, our cities, and leaves behind a rubble of empty factories and a mountain of IOUs. They know nothing about us, believing only that we want nothing more than to be good consumers and producers for “the economy,” and maybe have a hang-up or two about that religion thing which ought to be acknowledged.

It’s hard to get interested in a Presidential campaign where the depth of the problems is constantly glossed over and no reasonable solutions are proposed. I care about America, and I want to see it get out of this mess, even if I am deeply skeptical about its ability to do so. But I love Holland, and if Presidential candidates are going to waltz into my town and, in essence, tell me they can fix America by sacrificing my city – well, they’ll have a fight on their hands. At the very least they’ll be told their position is untenable, because you can’t turn America around by doubling-down on our indebtedness.

¹The State reports: “Despite the fact that U.S. mobility is at its lowest point since World War II, young, highly educated Michiganders continued to migrate out of the state in 2010, with the out-flow actually picking up pace since the prior year.  In 2010, 33,500 persons age 22 to 34 with a bachelor’s degree or better (the “young knowledge population”) left the state, offset by just 16,700 entering, yielding a net outflow of 4.1 percent (reported in the graph above).  Between 2009 and 2010, out-migration was driven by an additional 3,800 young persons with degrees leaving the state.  The level of inmigration remained steady.”

²I’ll have more to say about this in a later article.

³My thanks to Philip Bess for drawing my attention to Marohn’s work.

The Economics of Distributism III: Equity and Equilibrium