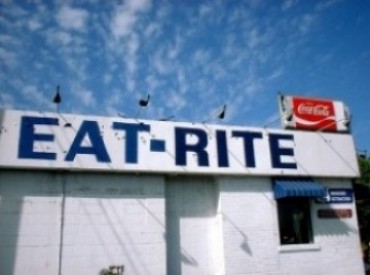 Louisville, Kentucky. This is a story about a matchmaker. Her name is Sarah Fritschner, and her program is called Farm to Table.

Fritschner is a food broker for the city of Louisville, though it might be more accurate to call her a broker of foodies–her work is really human relationships. It is her job to foster business between the area’s farmers and food producers, and the restaurants, institutional chefs, grocers and large food service companies who supply a significant portion of what Louisville eats.

Fritschner works from both ends. She finds markets for food already being raised or grown in Kentucky, and she finds sources for chefs and food suppliers looking for certain items or bulk amounts. She works on both supply and demand.

In 2008 Louisville’s former mayor, Jerry Abramson, commissioned a food sourcing study which recommended (among other things) that the city hire a “public interest broker” for food. Fritschner jumped at the chance. As a a former Courier-Journal reporter and food writer, and the author of several cookbooks, she already knew many of the people who are now the subjects of her matchmaking. And she was personally interested in helping farmers in Kentucky find a way to make a living.

Her job is to share information and bring parties together to answer questions about sourcing, delivery, marketing and compliance with health regulations. One night she may be in central Kentucky talking to goat farmers about possible markets (or whether there are any). The next morning she may be downtown at a restaurant on Market Street, telling the owners she has lined up a local supplier for the 1,300 eggs they need weekly–and has someone who can offer Kentucky-made breakfast sausage, too.

A lot of her work is with institutions such as the University of Louisville, Jefferson County Public Schools (JCPS) and Jewish Hospital. Since last fall she has worked on site at all three part of every week. One result is that U of L will start serving sandwiches made with local meat and cheese on March 1st, and after spring break the university will use local ingredients in its hot items as well.

JCPS–an enormous district with about 100,000 students–has contracts with six farmers this year (up from one last year) for 19 different fruits and vegetables, and has increased the number of pounds it buys. The school system also has a Fresh Food and Vegetable grant from the U.S. Department of Agriculture to offer fresh food three days a week to 17,000 students getting free or subsidized lunches. This year, for the first time, Fritschner says, 18 of those items will come from Kentucky farmers growing them on contract. A regular JCPS order for a lot of Kentucky meat is probably in the future.

To improve significantly the amount of local food available, Kentucky needs more of what Fritschner calls “aggregators,” people who bring multiple farmers together to serve a larger market more regularly and more efficiently than those farmers could supply individually out of the back of a truck. One example is Marksbury, the relatively new slaughterhouse (and market) located in Lancaster, south of Lexington. Plants like these are expensive to build, highly regulated, logistically challenging to run and not generally regarded as picturesque (though they can be a perfectly pleasant neighbor). But they are utterly necessary if we are serious about increasing our supply of Kentucky-raised meat. If there are two dozen farmers willing and able to supply lamb to a city that loves it, but no federally inspected abattoir with the capacity to process that lamb, those farmers can’t sell and their customers can’t eat.

Fritschner’s job is important to a state full of small farmers who recently lost a reliable market for an important cash crop—tobacco—and who are trying to find new markets for farm products. But it is also a national model for how to improve a local food economy, or indeed any local economy. If you think I exaggerate, then take a look at a recent Ford Foundation initiative. The method Ford has studied and is now testing in southeastern Ohio to improve a rural economy there is to leverage one of the area’s local commodities—in this case, wood—through precisely this Farm-to-Table method of cooperative brokerage. An organization called Rural Action is linking regional wood suppliers, mills, builders and woodworkers through information sharing, marketing and  partnerships.

As economic development programs go, Farm to Table is cheap. It requires nothing like the millions in tax incentives regularly used to persuade a major manufacturer to relocate or stay, or the $950,000 the city is currently paying Greater Louisville Inc. (our chamber) to work on large-scale economic development projects. For the price of one moderately-compensated job, Louisville is buttressing and creating numerous businesses both in the city and in the rural towns that surround her.  And as the economists know, small businesses create the bulk of jobs in any state’s economy.

Finally, Farm to Table is keeping local food dollars in Kentucky—and since Louisville spends an estimated $3 billion on food annually, we are talking real money. The more Louisville feeds itself gastronomically, the more it feeds itself economically. Those here who are hungry for more local food and more local markets have someone to call.

What Wendell Berry’s Brush Teaches Us About Capitalism, Community, and “Inevitability”