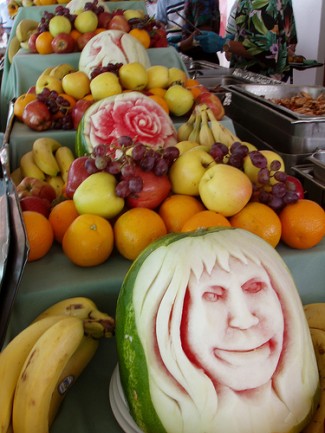 Louisville, Kentucky.  Several weeks ago I wrote a column of anti-gourmandism–and I have had the smart aleck’s usual reward. But I take nothing back; not even a little bit of exaggeration.

Today, however, since it’s full-bore harvest season, I will turn to my greener side—if not in expiation, at least to some readers’ relief.

Like many of you, I have grown a garden for years. It’s not enormous, but it’s not tiny, either; it’s about as much as I can handle. It has some perennial crops, and the annual Dalton staples like sugar snaps and greens, and the midsummer basics everybody grows, and a rotating list of experiments, which this year included the fast-growing field pea Northern Lady (thank you, Carol Deppe).

There is also the nostalgia section—including (most years) the yellow beefsteak heirloom tomato named for a Mr. Jones of nearby Oldham County, and cousin Kathryn’s orange coreopsis.

To anyone who isn’t a vegetable grower, a garden is just a large and weedy bore, but to me it’s a giant sandbox. I never stop feeling the gratified pleasure of putting a dead seed into the ground and harvesting pounds and pounds of a living something as a result. Gardening may be work but it is never boring. It is miraculous. What have I done, really, to further this rebirth? True, because the tiller was down this spring, I was a human plow—that did require some effort. But other than that my contributions have been some compost, some homemade fertilizer (Steve Solomon’s recipe), a little weeding and less watering. It feels like a dilettante’s level of effort for what can only be called a masterful result. The benefit is mine, but not the credit.

And now with my food coming in and the farmers’ markets full and the Capstone produce auction in Henry County going three days a week, where I can buy wholesale in quantity, I am putting food by. The dryer has been going since June, the freezer needs reordering, and while some canning is done, more tomato sauce and about two hundred pounds of pears remain.

I try to keep my work in the kitchen in perspective. I am saving a little money when I put up my own produce, or food I buy wholesale, but otherwise it’s a wash, financially. Nor am I personally saving the planet with this garden, and I am not “feeding my family” in any large way.

But as a believer in incremental improvements, I can say I am feeding the family in small ways, and like one meatless meal a week, the smallness does add up to something. I am putting a piece of good Kentucky clay to the use it was intended for, once it lost its forest. When I buy I am spending a significant amount of our food budget in my own area, where the money is more likely to stay. And it’s useful to understand from doing just how much ground it takes to grow enough of something—that thirty feet of field peas yields a few supper’s worth fresh and another couple dried, but that thrice that of potatoes will feed us breakfast, lunch and dinner for days and days.

Also, I am having a good time.

Every year I make new mistakes born in the hopefulness of December’s seed catalogs, and every year I learn enough to understand better and better how little I know. I always benefit from that reminder.

You would have to call what I do a hobby. I am not preserving enough to be truly “serious.” If I were growing and preserving enough to feed us for most or all of the winter, I would be much harder pressed. As it is, this is serious play, and not only because if I skimp the sterilizing, I could do us all in. Except for those moments when I strum an extended riff on the merits of boxed macaroni, food for the family is culturally, nutritionally, and economically a serious (though not humorless) matter.

Years ago the journalist Rose Wilder Lane (Laura Ingalls Wilder’s daughter, and the “Rose” of the Little House books), a critic of President Franklin D. Roosevelt’s Social Security Act, returned an official SSA survey postcard calling the program a Ponzi scheme.  Perhaps because it was 1943, someone in the Post Office had the temerity to read it, and to bring it to the attention of those higher up, who sent it on to the FBI, who thought it prudent to send a state trooper to Mrs. Lane’s home to question her patriotism. The resulting scandal was a nine days’ wonder in the press—Mrs. Lane was a prominent writer at the time—and the reporters descended upon her house in Connecticut for an interview. She promptly led them down to her cellar, where she showed them row after row of vegetables, fruit and meat she had put up.

“Gentlemen,” she said, “this is social security.”

I can’t keep up with her memory, or with the memory of my friend Paula’s mother, who lived through the Depression and who for decades afterwards kept two years’ worth of canned goods in her cellar, in case the next summer’s crop failed.

But I can raise a toast to these women with the shrub I made this summer: one with blueberries, and one with blackberries, and one with damson plums. That’s three more ways to put fruit by, as the syrups are long-lasting in the refrigerator. I like their piquancy, cut with seltzer, and I like the colonial feeling of drinking something George Washington could have drunk—his with branch water and rum, I imagine.

I made the shrub for a lark. I had the fruit to hand and was goofing around. But when the work of life is done in the spirit of play, that’s living.