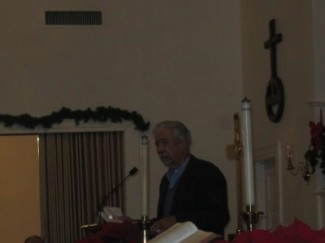 Last Friday, Tom Hayden, co-founder of the Students for a Democratic Society, principal author of 1962’s Port Huron Statement (or, if you Big Lebowski fans insist, the compromised second draft), Freedom Rider, anti-war activist, social worker, California state representative for 18 years, author, and all-around inspiration to anyone on the left, visited Wichita and spoke at a local church, as part of our Peace and Social Justice Center‘s 20th anniversary. What I got out of that visit is that his words ought to be an at least partial inspiration to those on the right as well.

Hayden has, of course, spoken at probably thousands of similar occasions, to millions of people, over the past half-century. And deservedly so: the Port Huron Statement stands, in my opinion, with Martin Luther King’s Letter from Birmingham Jail and perhaps at most only a handful of other documents as one of the truly essential political expressions of the 20th century. I teach the Statement a couple of times every year, and when I do I strive to point my students towards the arguably ambiguous place which its passionate, communitarian, participatory, democratic radicalism occupies in the history of modern progressive liberalism. Today “liberal,” when anyone can be bothered to think about the term honestly and seriously, is usually understood to mean the use of the state (its bureaucracies, its technologies, its manpower and money) to promote a kind of positive liberty and general equality. But Hayden and his co-radicals, thinking about the struggle for civil rights far away from their comfortably elite universities in the northern United States, had much more on their minds than vigorous enforcement of the 13th and 14th amendments (though they were thinking about that too):

[W]e are…countering perhaps the dominant conceptions of man in the twentieth century: that he is a thing to be manipulated, and that he is inherently incapable of directing his own affairs. We oppose the depersonalization that reduces human beings to the status of things–if anything, the brutalities of the twentieth century teach that means and ends are intimately related, that vague appeals to “posterity” cannot justify the mutilations of the present. We oppose, too, the doctrine of human incompetence because it rests essentially on the modern fact that men have been “competently” manipulated into incompetence–we see little reason why men cannot meet with increasing skill the complexities and responsibilities of their situation, if society is organized not for minority, but for majority, participation in decision-making…The goal of man and society should be human independence: a concern not with image of popularity but with finding a meaning in life that is personally authentic….

This kind of independence does not mean egoistic individualism–the object is not to have one’s way so much as it is to have a way that is one’s own. Nor do we deify man–we merely have faith in his potential. Human relationships should involve fraternity and honesty. Human interdependence is contemporary fact; human brotherhood must be willed however, as a condition of future survival and as the most appropriate form of social relations….Loneliness, estrangement, isolation describe the vast distance between man and man today. These dominant tendencies cannot be overcome by better personnel management, nor by improved gadgets, but only when a love of man overcomes the idolatrous worship of things by man. 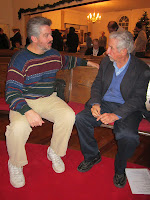 These young, privileged, and courageous twenty-somethings were doing more than laying out grievances. They were doing something prophetic, responding to the distancing, the conformity, and the apathy which post-WWII suburban wealth and stability had spread across much of white America, capturing and articulating some early whiff of the 60s utopian zeitgeist, one suffused with a spirituality that, even when not fully reflected in the final document or the actions of those who trumpeted it over the decades of activism to come, is undeniable. As Hayden himself put it, both in this reflection here and while talking to me after his presentation Friday night, “the Port Huron Statement wrote us, not the other way around.”

Hayden, in speaking and responding to numerous questions (and yes, even in Wichita, KS, there were more than enough of us liberals, progressives, former hippies, Occupiers, and other assorted radicals and wanna-bes and interested others to fill Fairmount United Church of Christ up to the balcony), returned repeatedly to that theme of apathy. The milieu he’d grown up in (like that of so many in this wealthy nation still today) was that suggested to him that it was only crazy, disturbed people, like Holden Caulfield in Catcher in the Rye or Randle McMurphy in One Flew Over the Cuckoo’s Nest, who felt the need to take real action in opposition to the status quo–and yet there was the example of African-American citizens throughout the American South, engaging in sit-ins and protest marches and boycotts, risking their livelihoods and their very lives to be fully recognized members of the American community. They were taking incredible risks–and, from the perspective of decades later, he said he was more convinced than ever that they were capable of taking such risks because they knew how to “take the long view.” Not that the didn’t have immediate demands; they absolutely did! But they also were part of “communities of meaning” which much of the white consumer-capitalism-created college-educated class lacked, communities that provided them with strength and resources for when things get absurd and “sideways”–which, of course, they always will. He credited his own religious tradition (he was raised in a strong Irish Catholic family) with giving him a little of that, and, Californian that he has been most of his life, the example of the protesting Hispanic farm workers as well. This stronger sense of history–one might even call it “tragic,” though he didn’t–is something which he feels so much of the progressive left in the U.S. has lacked over the past half-century. Liberals, he said, have too often been oppositionally inclinced and easily frustrated consumers, people who don’t how to do the organizing, or to respect and build upon the organizing done by those who have gone before, or to accept defeat and keep on working, confident that the lack of any coherent–much less “rational”!–story of progress in one’s ability to govern one’s community justly doesn’t mean the end of the story. When he spoke about the need to recognize one’s limits, to address oneself to those causes which one can most immediately respond to on the ground here in Kansas (or wherever), to be conscious of history, and to reject abstract “hope” in favor of realistic “planning,” the man sounded almost Burkean.

Hayden remained humorous and thoughtful and reflective through his presentation, with perhaps his only genuine flash of energy and anger coming when a questioner from the audience confessed that Obama’s inability or unwillingness to follow through on certain promises he made regarding civil liberties and the wars in the Middle East (an issue which has had much impact on my own thinking) had “broken his heart.” “Don’t let him do that!!” Hayden almost shouted in response. He continued: what activists and radicals are trying to do is make change, but when those changes happen they will because millions of individuals and neighborhoods and communities and groups have changed the conversation–“burst the canopy,” as he put it–through their own slow, constant activism. To expect change to be quickly delivered through signing an online petition or casting a vote and nothing else, like buying a jar of pickles at Walmart and getting angry because they taste bad, is just another kind of consumerist apathy–one that the corporate masters of our whole socio-economic and political order no doubt delight it. (On more than one occasion during his presentation, I thought he was about to break into a quotation from Ray Bradbury’s Fahrenheit 451 or Aldous Huxley’s Brave New World.) He’s happy to criticize the President, but as one who fully lines up with many progressive liberal views on environmental regulation and women’s rights and more, he’s frustrated at the idea that anyone whose vote might have made a difference in the 2012 election might have chosen the Green Party over the Democrats. Not because the Democrats are so great–he ripped into their war record and their dependence on Wall Street money often–but because are part of the conversation. The long view, he insisted, has to be about getting a place at the table, and then doing the deal-making you must when you get there. To make it all a grand, be-all-and-end-all moralistic struggle (he also said he hated talk about “lesser evils”–as if any actual Democrat or Republican in America today, no matter what they vote for or support, should be labeled “evil,” in comparison to the violence so common elsewhere in the world!), one that has you shouting in triumph when your bill passes or speaking of being heartbroken when you candidate losses, only shows that your sense of history is in the wrong place: that your focus isn’t a family or community that provide real meaning to your life. Political wins, he ultimately implied, shouldn’t be nearly as important to us (no matter what the issue) as the communal context that allow us to participate in political contests in the first place. 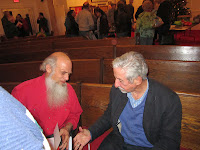 A few days before Hayden arrived in Wichita a student of mine–a wounded veteran of the war in Iraq, and one who drinks deeply from the wells of Rush Limbaugh and Sean Hannity–saw the flyer for Hayden’s visit on my office door, and went on a predictable tear, about how men like him were responsible for the decline of America’s greatness and had let loose in American public life a revolution in immorality which our country may never recover from. He was wrong of course–and I wish my student could have been there, as all sorts of folks, from academic eggheads like myself to Mennonite handymen like my friend Leroy Hershberger, were. If he’d come, he he would have heard what he expected in terms of policy preferences: Hayden is today, as he was a half-century ago, a crusader on behalf of liberal progressive causes (climate change, the war in Afghanistan, public employee unions, immigration reform, the drug war, etc.), and it would be interesting to talk with him about how his own chosen causes, and the candidates who back them, arguably sometimes complicate his own almost “conservative” insistence upon planning and organizing working to build communities democratically. But, if my student had been open-minded, he might also have been surprised to hear this man, so long and so thoroughly dismissed as a revolutionary hippie, talk quietly and seriously about the local, and radical, labor of politics, about striving to enable all citizens to be part of the never-ending conversation of government, and about the bureaucracies, the corporations, and commercialism that gets in the way of individuals making such authentic moments for themselves. That’s his wisdom; that’s his example. And frankly, if you take a look at what the man has represented and what he has accomplished….you’d be hard-pressed to find a better one.