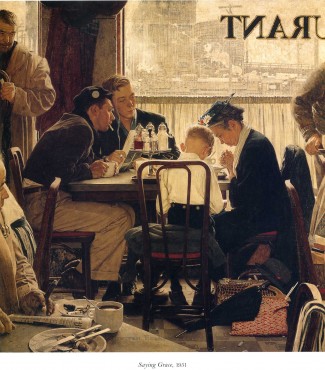 The creature itself also shall be delivered from the bondage of corruption into the glorious liberty of the children of God. (Rom. 8:21)

I am looking at Saying Grace, an extraordinary painting by Norman Rockwell.

I’ve never caught the bug for despising beautiful things, or dabbling in the hideous.  I cannot, nor do I wish to, learn not to look in art for beauty, intelligence, consummate skill, human feeling, and truth.  So I am looking at Rockwell’s painting, and I don’t care who knows it.

It’s a cluttered, slovenly restaurant at a railway station.  An old lady with a crumpled green old lady’s hat – the daisy in front is a fine touch of freshness and open air in these stuffy quarters – sits at a table, her head bowed and her skinny bony hands clasped in prayer.  Her grandson sits beside her, his back to the viewer.  He’s got close cropped red hair and the tad-too-big ears that tug at a mother’s heart.  His head is bowed, too, and the set of his shoulders and arms suggests that he too has his hands clasped.  He’s leaning slightly toward Grandma.  He’s taken off his hat, a gray bowler with a small red cockade.  It lies below with an umbrella and Grandma’s bags.  He looks very much like a little man, and that’s quite right, because the other figures in the painting are men.

Those men are drawn to the scene of prayer.  We don’t know why.  One of them, seated in the foreground, glances askance at them, a cigar in his left hand, a rolled up newspaper on the table, with a saucer of cigarette butts and a plate full of the broken remnants of his lunch.  He’s laid his knife and fork across the remnants as if to say, “That’s it, to hell with the rest.”  Another man, with a hard-bitten face, knits his brows and looks down at them, his mouth pressed tight in an expression that I can only describe as a grimace of distant approval.  But the really dramatic figures are the two young men who are seated at the same table with the grandmother and the grandson.  One leans forward, clutching his coffee cup, as if caught by surprise.  A cigarette dangles from his lips.  The other, a reddish blond, and exceptionally good looking but in a sad transient sort of way, leans toward his friend, while gazing at the couple, in rapt attention.  He could have been that boy, long ago.  He is holding a cigarette in his right hand, and the smoke rises up in a thin white wisp between him and his friend.

On one side of the table, silent words and prayers rise up to God, in thanksgiving for the very ordinary meal.  On the other side, moral embarrassment, and cigarette smoke.

There is not the slightest sense of ostentation in the grandma and the boy.  Their bodies suggest they are for one another and for God.  Yet in their simple piety they create a space of profound freedom.  They are in the railway station, and not in the railway station.  They are both comfortable where they are – they do not seem the least bit tense or wary or self-conscious – and they are going somewhere, while the men in the painting appear to have gotten stuck.  In fact, they seem to have forgotten themselves entirely, surely the sweetest freedom of all.  If the men were not also struck in the heart, I might say that the lady and the boy had entered a den of thieves and turned it into a house of prayer.

What is it that people fear so much about prayer?  When our schools were built to resemble the churches or the town halls of a free people, it was taken for granted that there would be prayer.  What would a dance be without music?  The spires were like jousting lances in a tournament against the sky.  They aimed high, because their hearts were high.  They freely gave what they had freely received.  They need not bow to any prince, to any system of government, to any worldly army, or to any cabal of men conspiring to clap them in bonds for the good of the state.  To my mind there is nothing so free as a group of people, old and young, men and women and children, singing songs of praise from of old, to the glory of God.  “Prayer and sacrifice,” says Chesterton, “are a liberty and an enlargement,” opening up the soul of man to the infinite God, and inviting Him to come and dwell among us, to have a local habitation and a name.

I think it is not accidental, then, that schools no longer resembled houses of prayer, or the town halls of a free people, which is to say a people open to God, about the time when prayer was sent packing from the schools, as if it were the prison and not the key, as if it were the cell and not the free heavens, as if it were the burden on the shoulders and not the promise of release, as if it were the cause of alienation and not of community.  And, at the same time, we began to build schools that are all inside and no outside, all stone and no garden, all power and no humility, all hulking system and no small child, all gears and no flowers, all compulsion and no promise.  The face gives witness to the life or the death within.

Suppose the proprietor of the restaurant had said, “I do not want my customers to be compelled to witness a moment of prayer.  It might embarrass them.  Therefore this will be a prayer-free restaurant.  No Saying Grace Allowed.”  Forget for a moment the small matter of civil license to think what you will and speak what you think.  In what way could the restaurant possibly be held to be more truly free after the banishment of the public prayer?

In other words, remove the boy and his grandmother from Rockwell’s painting.  What is left?

A seedy diner at a railway station, that is what’s left, and men abandoned to their compulsions.  They smoke, they down coffees, they check the racetracks, they go to work they do not enjoy, they return to difficult homes, they hunt for women, they pursue whatever alleviates the weariness of a world with no heaven, which might as well be a world with no sky.  But far away from the diner are men with the compulsion and the financial and political might to rule.  For it is some consolation, if one must be whipped, to ply the whip oneself, in a terrible parody of the words of the Lord, that it is better to give than to receive.  Thus will the powers that be, set free from freedom, rule without constraint or scruples.  It is absolutely astounding how many miserable compulsions a degraded people will tamely and timidly endure, if only to be relieved of the threat of prayer.  Having dwelt so long underground, they fear the open blue.

I have long been thinking that the only tonic for these sick people is the freedom shown by the old lady and the boy in the picture.  It is the freedom of being entirely open to God and thus entirely open to man, open to the point of nakedness.  Grandma and grandson are weak and vulnerable, in their forms and in their sweet freedom, but where I am weak, says Saint Paul, there am I strong.  If people run from freedom, then let freedom stride happily into their midst.  If people will not listen to reason, let them listen to song.