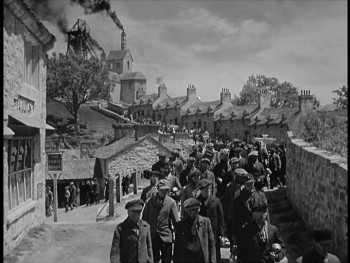 In one of my favorite movies, John Ford’s How Green Was My Valley, a family of coal miners is faced with the prospect of lower wages handed out by the owners of the mine, because the closing of the ironworks in a nearby village has resulted in a crop of men willing to work for next to nothing.  The grown sons want to begin a miners’ union, but the patriarch of the family doesn’t want to hear of it.  When his eldest son asks him why the owners should give the same wages as before, that devout Methodist father gives an answer that is at once profoundly human and Christian.  “Because they are men as we are, not savages,” he says.  “A good workman will always be worth his pay.”

That does not satisfy the eldest son.  “They are men,” he says, “but not as we are, for they have power, and we do not.”

The rest of the movie, like the autobiographical novel upon which it is based, goes on to chronicle the steady destruction of that green valley and the community of men and women who loved it.  It is undone by greed, small-mindedness, hypocrisy, detraction, and cruelty; next to lust, the ordinary sins of mankind.  The sins build up like the heaps of black coal refuse, looming higher and higher over the village.

They are men as we are, not savages.  I cannot drive that sentence out of my mind.  It expresses the fundamental democracy of human justice.  “A man’s a man for a’ that,” said Bobby Burns, another Gael who still felt the smart of English cultural domination.  His countryman Sir Walter Scott kept a warm spot in his heart for the cause of the Young Pretender, Bonnie Prince Charlie, even though he knew the lad’s foray into England was but a romantic and dangerous dream.  He too would have understood that verse in the great Welsh song, Men of Harlech, that revels in the defeat of “Saxon bowmen” – Welsh Saesnig, their word for the English, harking all the way back to the invasion of Celtic Christian Britain by the pagan Saxons in the fourth century.

Where, I ask, would Gwilym Morgan the coal miner be today?

I am looking for the noble head of a poor and hardworking family, with a radiant daughter and six fine sons.  He carves the meat at table and passes the portions round.  He gives his pay to his wife, and so do his sons.  He passes out to each of them a small allowance for the alehouse.  He and his sons work together at grueling and life-threatening work – in fact he will die when a portion of the mine collapses under the pressure of too much underground water.  When he and the boys come home from the mine, they must be scrubbed down outdoors with hot water and good lye soap, to get the coal dust and flakes out of the pores, though some of it will remain with its telltale blue-black under the skin for the rest of their lives.  He “reads a chapter,” as he and the family call it, out of the family Bible every evening.  He gets staggeringly drunk after his son’s wedding.  He has hundreds of songs in his heart, as do his fellow miners and ale-drinkers and his sons.  He hates the idea of socialism, and would no sooner tell a lie than he would be caught doing anything base or cowardly.

Where is this Gwilym Morgan?  Where is the man who can say, they are men as we are, not savages?

We professors at Providence College have for two years now been working in the midst of invisible men, men who once might have been like Gwilym Morgan, but who in these times are almost as insane and as morally blinkered as the professors they serve.  The men have built a large and handsome Center for the Humanities, out of brick and stone.  They have had to transform a hill and a parking lot to get the project started.  They have turned an old field into a new facility for soccer, field hockey, and track, complete with bleachers and a press house, and eighty foot tall lights for events at night.  They have laid hundreds of yards of concrete pathways.  They have cleared out a useless hill thicketed with scrub trees and made it into a decorative border for the campus.  They have built temporary parking lots and torn them out again and replaced them with sod.  They have dug out stumps and planted trees.  They have worked with jackhammers, drills, chisels, backhoes, saws, scaffolding, trowels, wheelbarrows, sledges, and the indispensable hands, arms, legs, shoulders, and back.  They have done all this while remaining as quiet and unobtrusive as they could be.

They work hard, at work that takes its toll on their bodies, in all seasons and in all but the filthiest weather.  Yet I doubt that the feminist professor – and most professors are feminist – gives them a passing thought.  Without men like them, we would have nothing; nothing to eat, no metal for our cars, no bricks, no stone, no wooden planks, no houses, no roads, no public buildings, no clean running water, nothing.  They do work that is more than desirable.  It is absolutely necessary.  I teach English poetry; that is not necessary.  I will not trouble to discuss sociology, feminist or otherwise.

We might be apt to shrug and say, “What of it?  They are well paid,” and some of them are.  Some of them are not, but then, don’t college graduates deserve to make more money than workers on the land, of the land, and under the land?  And they do have the vote, don’t they?  Everyone gets one vote, and that makes everyone equal.

Well, no, it doesn’t, no more than if everyone enjoyed the privilege of spitting once into a national spittoon.  We are looking for equality as men, so that we can say what Mr. Morgan said.  And the common laborers enjoy no such thing.  They have virtually no influence over what their children are taught in school, and how.  Their sons are regularly badgered for being boys, and bullied into ingesting drugs to conform their boyish natures to the ideal of mannerly servility.  They are not pillars of their communities, because there are no more communities; there are political abstractions called “towns” and “cities,” whose leaders take their cultural instructions from the media and from the national government, and who themselves are less and less likely to have grease under their fingernails or freckles of carbon in their faces.  They are not the masters in their own homes; the effeminate vices peddled by their “betters” have seen to that.  They are likely to have fathered children out of wedlock, or to have been divorced, sometimes with good cause, far more often without.  They ingest the poisons peddled by mass entertainment.  Their sons surf the internet for porn, get fat, wear their pants around their thighs so as to look like dwarfs stretched on a rack, can’t dig a post-hole or sing a hymn, and are given comic books in school instead of Moby-Dick.  Our need for these fathers is total, yet their authority is minuscule even in their own localities, and their influence upon national politics is zero.

If such men ever took it into their heads to strike, not against the owner of the coal mine, but against their masters in the media, the classrooms, the board rooms, the state capitols, and Washington, who knows what might happen?  We might have a republic again.  But I’m not holding my breath.  A John Dickinson, mild-tempered though he was, would be at a loss for words to fathom the depth of our servility, both moral and political.  What, after all, were a couple of pence on a bag of tea, compared with thousands of unread pages managing every facet of medical treatment for three hundred million people?  Slaves do sometimes rise up.  Pampered slaves, never.