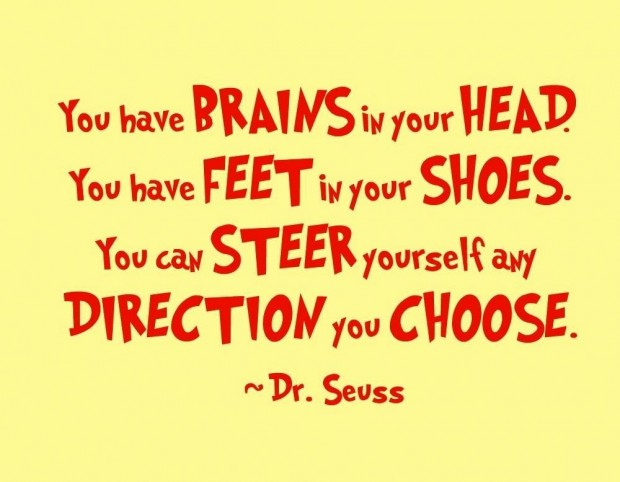 It is graduation season. On campuses across the country graduates will be subject to the last compulsory and least remarkable rite of passage: the commencement address. By my calculations I have attended nearly 30 graduation ceremonies. Of the addresses I have heard I remember exactly zero of them. Or, perhaps more accurately, I remember each of them, because they are all indistinguishable.

The typical commencement address begins by noting what a remarkable achievement the students have accomplished, spiced with no small amount of institutional self-congratulation concerning both the rigors of its programs and the value of its reputation. The speaker will no doubt comment on how a degree from School X is a ticket to success. Colleges are the weeding mechanism for entry into the meritocracy.

The speaker will pivot to the idea that such a ticket carries with it certain obligations, namely the obligations to DREAM BIG, to CHANGE THE WORLD, to MAKE A DIFFERENCE. It is the narcissism of achievement that colleges peddle. I was especially struck by this fact while attending the commencement ceremonies of one of my daughters, who had attended an erstwhile denominational school. Once a school abandons its tradition, as this one clearly has, all that is left is the school’s claim that they are “producing” graduates who “make a difference in the world,” by dint of an education that is “distinctive.” These so-called distinctives are really marginal differences at best, for the more schools talk about their distinctives, the less distinct they actually are. God bless my daughter, but the college she attended was pretty much identical to almost every other left-of-center, multi-culti, secularized, Chronicleized, ideological liberal arts college in the country.

What struck me most during the proceedings was just how narcissistic it all was. Most of the ceremonies were a celebration of self more than a celebration of academic achievement. (One public performance during the weekend revolved around the discovery of one’s identity while at College X, along with the concomitant embrace and celebration of that identity by others.) Students are encouraged to pursue “a meaningful vocation,” a charge that carries within it a devaluation of most work (a point made by Berry in Life is a Miracle).

There is the requisite reading of Dr. Seuss’s Oh, The Places You’ll Go! – perhaps the most narcissistic child’s book ever written, a book notable for the complete absence of other persons. Nonetheless, the main character – YOU! – is 99 3/4 percent guaranteed SUCCESS. The protagonist is promised the ability “to move mountains,” the source of such faith being belief in the self. The surfeit of personal pronouns in that book is enough to give vertigo to the most well-grounded. Graduates, via such books, are encouraged to get up and get out, to pursue their projects without regard to the well-being of others, except as canvasses upon which self-congratulatory do-goodism  can be painted.

It’s all so abstract. One reason why commencement addresses bore the hell out of me is because they aren’t connected to anything. Any reasonable graduate sitting and listening to the typical address might reasonably ask, “But finally, sir, what would you have me do?” Or, the smarter ones might ponder why it’s better to dream big than to dream small, especially if the big dreams are abstract and the small ones concrete. (I’m on record as saying there is much to be said for telling incoming students they ought to pursue the very attainable dream of finding a mate while they are at college.) No graduation speaker has ever asked whether CHANGING THE WORLD is actually a good thing, much less an achievable one, or whether they might be changing the world for the worse. As PJ O’Rourke once said, everyone wants to change the world but no one wants to help mom with the dishes. Indeed, commencement addresses will rarely, if ever, charge the graduates to be faithful friends, loving spouses, and dutiful children. But none of us live and work in the world writ large; we live and work with particular people in actual places. Sometimes the worst co-workers are those with the broadest aspirations, as if doing good for people you don’t know is more imperative than treating well those you do.

I recently finished reading David Brooks’ The Road to Character, a book I recommend to all readers. The bulk of the book involves the examination of character by looking at historical persons and identifying their virtues and vices. As such, it is the reclamation of the tradition of teaching virtue through imitation. The book is a searing indictment of the narcissistic tendencies of our age (two main problems with narcissism: the narcissist is blinded by self-love, and so is unable to identify it; and narcissism always disguises itself as something else). It’s a breezy form of cultural commentary, but an accessible and worthwhile one. Brooks offers the useful contrast of “resume virtues” with “eulogy virtues.” He identifies within himself as a character flaw the tendency to want to occupy an ever-larger stage, to play to public acclaim. He is critical of the meritocracy, and the use of colleges and universities as sorting-mechanisms. Mainly, he defends the ideas of limits, of scale, of place. He recognizes that it is much more difficult, and more imperative, to change oneself than to change the world. He writes about the meritocracy:

“This tradition tells you how to do the things that will propel you to the top, but it doesn’t encourage you to ask yourself why you are doing them. It offers little guidance on how to choose among different career paths and different vocations, how to determine which will be morally highest and best. It encourages  people to become approval-seeking machines, to measure their loves by external praise – if people like you and accord you status, you must be doing something right. The meritocracy contains its own cultural contradictions. It encourages people to make the most of their capacities, but it leads to the shriveling of the moral faculties that are necessary if you are going to figure out how to point your life in a meaningful direction.”

Brooks describes how this meritocratic impulse corrupts relationships, particularly that between parent and child. Parental love is now, he argues, directional, aimed at insuring their children achieve inner-worldly success (I suspect something like this factors in to the findings of the recent Pew survey). The parental desire for a child’s achievement, often cloaked as the child’s “happiness,” has about it the stench of conditional love, where love itself is replaced by approval. It makes tenuous the bonds between parent and child.

(Most parents are asked on occasion what “they want” for their children. The standard answer is happiness. My standard answer is “virtue,” including and especially the theological virtues. The obsession with happiness is destructive, both because it places a lot of pressure on the person in such a way as to insure guilt and disaffection, but also because it elevates the needs of the self above the needs of others. Americans would do well to shut-up about happiness.)

Commencement ceremonies are  directed not only to the graduates, but primarily toward the parents. The school must make the argument to the parents that the money spent was “a good investment” in the sense that the graduate has both “achieved” and exponentially increased his or her earning potential. The school’s imprimatur acts as a conduit of parental approval, and marks perhaps the last and greatest expense of bourgeois parenting in the achievement culture. Typically someone will even joke about this, but the joke points to the reality of how we raise our children by fabricating experiences in controlled environments for the purposes of moving them up the meritocratic chain. In this we have commended the poisoned chalice to our own lips, for our children will show their gratitude by doing exactly what we’ve trained them to do: move.

Colleges have traded their wares in an age marked by certain assumptions, the most important of which are upward mobility and endless growth. Most schools have assumed they can continue raising tuition because they assume they will never run out of resources, the most basic of which is students seeking high-paying and meaningful employment. But as changes in the labor market begin to exert downward pressure, and as the birth-rate declines, these same schools will face a crisis of sustainability, particularly if there is nothing truly distinctive about them (namely, immersion within and continuation of a definable tradition). Consider the fate of Sweet Briar College, which will not be the last school to close its doors.

A recent essay by Jonathan Malesic in The New Republic nicely gets at this growing awareness among college graduates that they’ve been sold a bill of goods. The author argues that all the talk about purpose and meaning and upward mobility is bound to end in disappointment and disillusionment. Some readers regard the piece as cynical, but only when one views the cynicism as the flip-side of an unsustainable and unrealistic idealism. At the intersection of “You love it,” “the world needs it,” “you are good at it,” and “you can be paid for it,” is “Yeah, right.” The generated disillusionment and disappointment will soon turn to anger when students find themselves unable to make their student loan payments. (I recently had dinner with a very bright, hardworking former student who will be paying $700 a month for the next 20 years. My heart broke.)

Malesic argues that “we would be better off if we liberated work from the moral weight of ‘purpose.’” Echoing Berry, Malesic argues that the emphasis on purpose and meaning has the effect of devaluing labor. Was my father’s 50 hours a week in a machine shop so he could put food on the table and get his children a good education any less valuable than what I do? He may not have liked it, but he did it diligently and without complaint, while many professors are inveterate slackers and complainers.

Likewise, a recent Brooks’ article summarizes his request to readers that they submit essays describing their purpose in life. Titled “The Small, Happy Life,” Brooks tells how most readers found some peace in their lives once they gave up big dreams, lofty goals, and the pursuit of worldly success.

Which means our culture may be discovering what Christians have long known about the first being last and the last being first, about rich men and needle’s eyes, about finding our lives by first losing them. If so our colleges and universities may eventually catch up to this wisdom, and rather than preparing students for lives of leadership will prepare them instead for lives of piety and self-sufficient labor, and attend to the scale of concrete, daily tasks that must be done. We may even have a commencement speaker who tells the graduates to go help mom with the dishes.