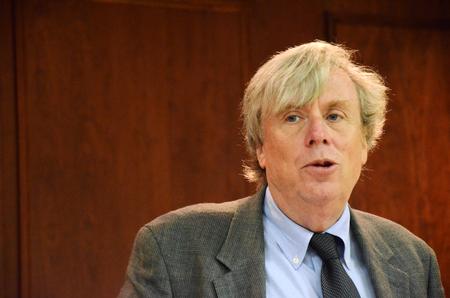 Peter Augustine Lawler passed away on Tuesday, leaving a significant void not only in the lives of his friends, family, and students, but in the intellectual life of American conservatism and thus the nation. Peter was an original: he could converse fluently on a range of topics from the political thought of Orestes Brownson to whichever TV show happened to be cutting edge. I’ll confess I typically tuned him out when he started talking about pop culture, generally regarding it as a waste of time and energy. Mine was a defensible position too, except that Peter was so remarkably productive that his forays into HBO and contemporary music seemed more like chastisements than diversions. (To read more about his remarkable accomplishments, see links below.)

His The Restless Mind: Alexis de Tocqueville on the Origin and Perpetuation of Human Liberty connects Tocqueville’s analysis of democracy to Pascal’s assessment of the human condition. The theme remained a central one for Lawler throughout his life: that democracy produces a particular kind of instability and anxiety, but a kind that is a subspecies of the general difficulty of life itself. Democracy, Lawler believed, deepens the divisions, alienations, and loneliness that is tour lot as human beings, and thus introduces new levels of fear into our dealings with each other, precisely because we know we are going to mess up our own lives and those of others in the process. Tocqueville wrote that democratic man “is right to feel this fear, for in ages of democracy all things are unstable, but the most unstable of all is the human heart.”

Our lives fluctuate between giving in to the dissipation of the wandering heart’s longings, and looking for something that enables us to anchor, and thus enlarge, the heart. Almost all his books deal in one way or another with this theme. His interest in education stemmed from his conviction that only a genuinely humane and properly liberal education could provide the moorings that would keep young souls from getting lost. His interest in shows such as Girls resulted from his interest in reaching out to the lost and showing them that they had not lost the truth of their own condition, that they could aspire to more, and that death itself was a terminus that could stabilize the heart.

My first encounter with Peter was a good quarter century ago when we sat together on a panel at an APSA meeting. I was presenting on William James and Peter was the respondent. His response consisted of one question: “What did James think of death?” This led to a far more interesting exchange than my presentation warranted, Lawler averring that he couldn’t take anyone seriously who didn’t take death seriously.

Peter did not really like to sit on the Porch, but he was our friend. He read us regularly, and commented on our vision of American democracy routinely. In my judgment he never really got what we were up to, being himself a little too comfortable in the contemporary world. But that too resulted from his central belief that the human condition was not fundamentally altered by historical and cultural circumstances, and that our job was simply to make the best of and the most sense of the context within which we found ourselves. He accused us – unjustly, I think – of a kind of nostalgia that thought it could bypass the inherent anxieties and dislocations of life by stipulating a particular set of circumstances as particularly propitious. In Peter’s view, the tendency to see things in their declension, of which I am surely guilty, was a one-sided commitment against his conviction that everything was getting better and everything was getting worse, and all at the same time. He made himself comfortable with things I’m not comfortable with – electronic technology foremost among them – but no one can doubt his deep thinking on these issues. In a certain sense, his ability to absorb technological developments and popular culture were borne of his faith in human beings on the one hand and his knowledge of the difficulty of life on the other. Things were always going to be tough for us, but we’re also resilient.

And this led to the areas where we found ourselves on common ground: a deep respect for the work of Walker Percy, the Southern Agrarians, and the Stoic impulse in American life that would enable us to endure the blooming and buzzing confusion of our lives with repose and responsibility. Bedecked in seer-sucker with a bourbon in his hand, Peter would often communicate a kind of bemused detachment that could easily be confused for indifference. Really, though, it was a light-hearted but serious Stoicism.

But it was more than that. Like Percy, Lawler’s analyses and inclinations culminated in faith. This too was common ground that made our differences seem fairly inconsequential. For that matter, in the contemporary American academic context, the contestation between PomoCons and Porchers can only seem, to use Tocqueville’s word, puerile. He has passed in the embrace of Christ and His Church, and we pray for the repose of his soul. Requiescat in Pace.

Some obituaries by other friends of Peter:

Charles Copeland (at ISI, where Peter was both a stalwart and a rock star): https://home.isi.org/memoriam-peter-augustine-lawler