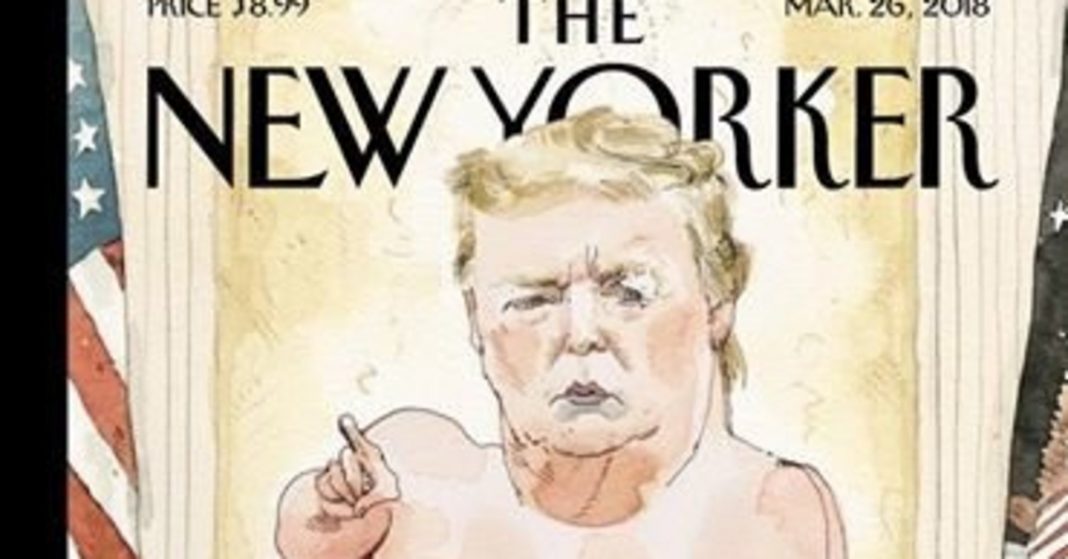 All animals are equal, but some animals are more equal than others. –George Orwell, Animal Farm

The cover depicts a naked Trump convening a press conference. What stands out the most in the picture is Trump’s flesh. His head is huge, one of his breasts is drawn in a way that accentuates shapeliness, his body gets wider toward the middle of his body, and his hips burst out from under the podium. It is nearly impossible to conclude that the cover is not mocking Trump for his body, for how fat he is. I’m perfectly glad to concede that Trump could probably benefit from regular workouts, a healthier diet, and a few less pounds on the scale. So let’s not waste any time arguing about whether Trump is fit or fat.

But excuse me for being confused; I could have sworn that the left sees a person’s body as being off-limits for criticism. Let’s imagine for a moment that Hillary Clinton had been elected president and that this same magazine ran a comparable picture of her, suggesting that she was overweight, and this was not only her problem but also the country’s. Or that The New Yorker had done something similar with Obama, publishing a naked picture of him and highlighting one of his perceived bodily flaws.  Too difficult to imagine? Okay fine, switch our little though experiment to a publication on the right, say National Review or The Weekly Standard. Still can’t picture it? That’s because it wouldn’t happen.

This is just the latest of many incidents that highlight one of the tensions of the populism we keep stoking. Remember that we are not talking here about the latest YouTube personality that has developed a small following, or a politically-fringe academic who is promoting his book, or a webzine that puts out click-bait articles about whatever happened three minutes ago. Instead, we would be hard-pressed to find another publication that more accurately aligns with the values and desired lifestyle of the educated, the middle and upper classes, the cultural elite, the East Coast, than does The New Yorker. And the magazine has just made it clear to us that when it is expedient to do so, it has no problem going straight for President Trump’s gut.

Now I want to live in a country where criticism—even in provocative and ironic forms—is in bounds. Hence our commitment, at least on paper, to what we call “free speech.” But legal protections aside, Americans have also shown themselves to be easily drawn to purity moralisms and purges. When I was growing up, I experienced this phenomena in and around Christian fundamentalism, the “trickle-down” influence of the Christian Right. To be sure, those forces still exist, and they even possess some political power. But in 2018, the Christian Right’s cultural influence is nothing compared to, well, I’m not sure what to call it. Left-wing activism? Progressivism? Mainstream media? Identity politics? Intersectionality? Social Justice Warriors?

Whatever it is, I have increasing difficulty believing this way of being in the world is actually going to be good for us, including the groups that are supposedly receiving the most advocacy. After all, the practices have a tendency to reveal something more, well, ideological. We’re marching for women (unless those women think abortion is a violent practice that shouldn’t be legal). We believe all women (except the ones who accuse President Clinton or Muslim men). We don’t fat-shame (well, except for President Trump, you can fat-shame him).

This is a problem for many of us who, as soon we think we might actually have a grasp on the ever-growing-and-shifting list of rules, notice that the people who are constantly lecturing us about our need to follow said rules also break them—sometimes in the most flaunting way possible—so long as breaking the rules is at the expense of someone they don’t like.

When you see the rules get made and broken by the same people enough times, you begin to wonder if the hypocrisy is almost intentional. Perhaps it is a tactic in a war that is geographic, socioeconomic, cultural, and political. As Mark Lilla’s The Once and Future Liberal showed, the tactics themselves aren’t that successful at winning elections. But that doesn’t mean they aren’t successful at accomplishing what they’re setting out to do: reminding people of their (constructed) inferiority, stabbing them where it hurts, pissing them off as much as possible.

How could the result of this double standard be anything but a growing resentment like the very one that continues to manifest itself in our politics? If I—who have a couple graduate degrees, a mostly-humane job with decent benefits, didn’t vote for Trump, and have a damn subscription to The New Yorker—notice this divide, how much more so do people who actually voted for the president, or maybe who got crucified for supposed fat-shaming that was a lot more borderline and subtle than what The New Yorker did, or maybe even a person who is fat, poor, and a supporter of the president? Well, but those people are too stupid to realize…

No, they’re not. They intuit that the disgust that’s all over the front cover of The New Yorker also applies to them. And every time they have that experience, their political commitments entrench further. Changing one’s mind is never an easy task, but it’s especially challenging when you’re busy fending off attacks.

And, of course, in-between the winks that come with comments like “I can’t believe anyone could vote for this guy!” and “I really wish Trump would stop tweeting!” the editors of The New Yorker know exactly what they’re doing and who they’re baiting.

Learning to Love a Nation: A Review of Richard Mouw’s How...

Principles Over Power: Lessons from Bush and Nixon