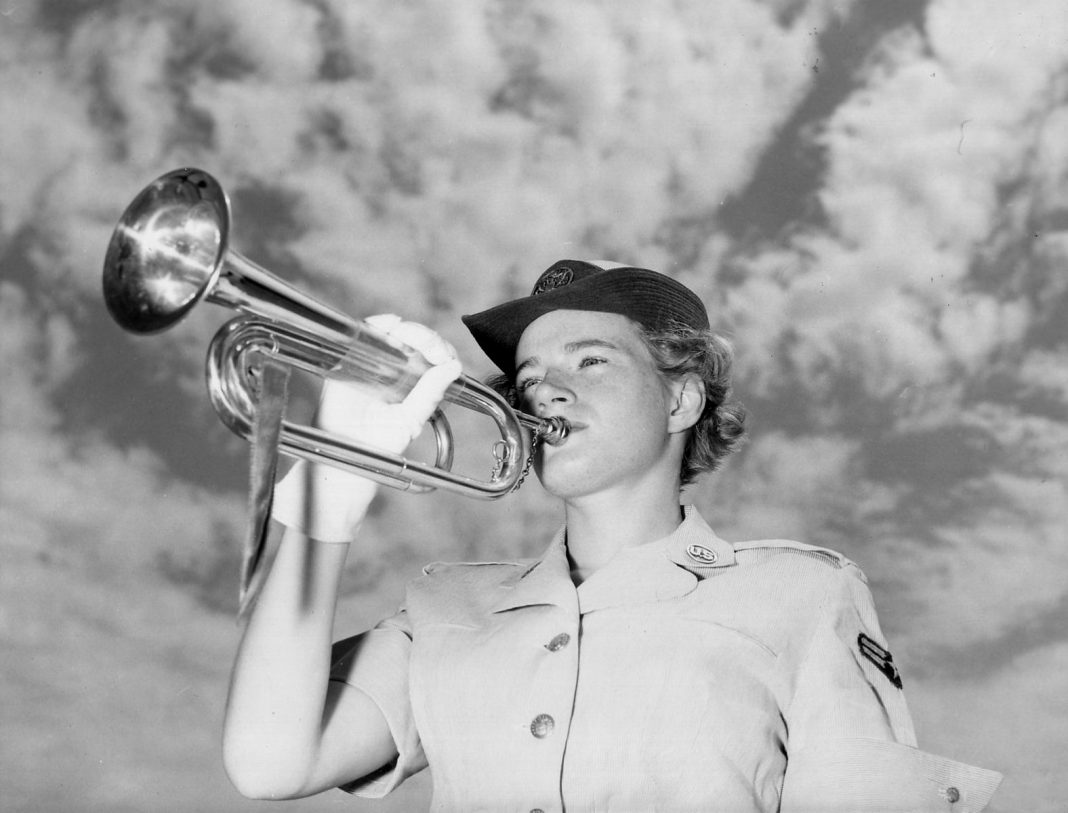 It is a mark of the middle class to maintain a low-grade prowl on eBay or Craigslist for some odd thing. My prowl was for a bugle.

The desire was neither idle nor cosmetic. My kids go where they go, and I need to get them back at times. Regular yelling cheapens the currency. My little flea market cowbell wasn’t loud enough, and it also only said one thing. Bugles are loud, and the variety of calls would give the kids some notice as to why they were being summoned.

A bugle is not the solution for everymom. I gave up on my brass career after my first year of college, during which I realized that band was packed with people who were more talented and committed than I was and, moreover, were music majors. That is how I missed the point of a liberal arts education, but I had given nine years of my life to playing brass instruments, so I had it in me to become a bugler. I did not imagine that any qualifier other than “maternal” would accompany the title.

Small towns are long on veteran funerals, and short on buglers. The solution has been robots. Somebody invented a bugle with a speaker inside it that plays taps at the funeral of an individual who has earned military honors. These devices sound good and get the job done: any old body can put the bugle-bot up to his mouth and give the mourners their taps. Still, there’s no substitute for live music.

The population sign at the limits of the town where I live posts a number slightly over 1000. The town doesn’t have a lot of things, but it does have a bugler: the Kid. The Kid is a middle school trumpet player who plays taps when called upon by the local chapter of the American Legion. The Kid is not a Boy Scout, but the Boy Scouts invite him and his taps to dignify the flag burning ceremony they hold each summer. The town loves the Kid. He’s a squirrelly little dude who makes our Guffman-ish gatherings sound official and patriotic. The Kid is a hero.

From my own ancient times, I was interested in bugle calls. I took up trumpet to please my father, who told me that he wanted to play trumpet as a child but did not have the opportunity. Bugle calls helped fill the 30 mandatory minutes of daily trumpet practice when warmups, exercises, concert pieces, and unnecessary valve oiling fell short. I learned taps from E.B. White’s Trumpet of the Swan. Reveille I knew from my Wee Sing Silly Songs cassette. High school marching band added the Mess Call to my repertoire: it was the trumpets’ duty to exhort the YHS Foxes to deal with the opposition like so many MREs.

When Craigslist finally offered me a bugle for $20 (twisted lead pipe, no mouthpiece), my new online destination was the U.S. Military’s list of bugle calls. Bugling was a broader language than I had known. The Mess Call would obviously be a regular on Mom’s bugle; likewise Assembly, and Reveille would ease the rousing of sluggish tweens. But military bugling had many more calls to offer than those known from movie soundtracks. The School Call would be perfect for notifying kids scattered throughout the house that the bus had arrived. I noted the Fatigue Call, which might help me avoid more chiding from teachers about my boys forgetting their dress code belts. There was Tattoo, a long and intriguing composition notifying hearers that it was time to get ready for bed. I liked the Church Call, which was divided between a contemplative first half and a vigorous second. I wondered if sounding it on Sunday mornings would jolt any lapsed vets into coming to church.

An Army band veteran who runs a music shop in the next town (pop. 5000) found me a used mouthpiece for $8. When I expressed doubt over his absurdly low price, he gave it to me for $5.

Then the Kid got braces.

I was at the funeral where he crashed, the poor guy. It was painful. Brass on braces tears up the inside of the player’s mouth. The Kid could have been shredded from practicing, or maybe he was trying to play without having practiced for the purpose of saving his mouth for the funeral. Whatever the explanation, his pain became everyone’s—his lips to our ears. The mourners forgave their beloved Kid as only a small town can.

A veteran of the Korean conflict died two days after the Kid’s crash. His funeral was scheduled for six days later. The Legion called me.

The worst possible person to play taps for a military funeral is a middle-aged housewife with bad hair.

I had reservations about going public. The ideal bugler for taps at a military funeral is a military bugler in uniform. The next best option would be either a professional trumpeter, or a Boy Scout in uniform. Lacking these, somebody like the Kid is not bad: people have a lot of goodwill toward kids who are learning something other than video games, and they’ll forgive a kid for messing up. The worst possible person to play taps for a military funeral is a middle-aged housewife with bad hair.

Music.army.mil had no advice for conscripted civilian buglers. Surely there were protocols and etiquette of which the bugler should be aware, but the Legion guys assumed I was the expert. I waded into a bog of hobby bugling websites run by bugle vets, military and Boy Scout. I found that the Kid’s typical practice of playing one-man “echo taps” was against protocol, or so said somebody on the internet. I had heard of echo taps: two buglers play each phrase of the call antiphonally, giving the effect of an echo. The Kid just played taps, then turned around and played taps to the opposite horizon.

This poor man’s echo taps seemed a little goofy to me, and I didn’t want to double my chances of messing up by having to play the whole thing twice. I visited the Army band vet who sold me the mouthpiece and asked him if the makeshift echo sounded kosher. “It’s not kosher,” he said. Then he shrugged. Secular bugling was tolerated, apparently, but I still didn’t want to play taps twice. I made my decision to observe military protocol. This correctness would be my gift to the American Legion and our great nation.

I mentioned this to my husband who, as a pastor, has been to a lot of funerals here. “Do not do that,” he said. “Everybody here expects echo taps. They do it at every funeral.”

“They don’t care about protocol,” he said. “Play echo taps.”

I practiced echo taps in my kitchen, where my bugle hangs, all week long. I practiced turning to the opposite horizon in a way that would not look shambly, but also would not look like a housewife with bad hair pretending to be a uniformed military bugler.

I read somewhere else on the bugle internet that Winston Churchill had ordered taps to be played at his funeral, followed by Reveille. Resurgam, I thought. I liked it. It was against protocol, though.

The day dawned gray and rainy, but my Legion guy was optimistic. “The rain is supposed to let up for a while,” he said. I planned to sound the first call facing west, and the echo facing east. Resurgam.

I did not have a uniform to buy me credibility, or Kid-ness to buy me sympathy. I just had a bugle.

The Legion guy drove me to the cemetery ahead of the hearse, and I tooted out a few trial notes upon arrival. The day was technically warm, early September in southern Illinois, but a crazed wind was eager to get the arpeggios over the Mississippi, 30 miles southwest. My notes were scared and piffly, mustering me to military courage. I did not want to mess up for this man’s widow and daughters, for the Legionnaires, for the patriotic town, for the common good. I did not have a uniform to buy me credibility, or Kid-ness to buy me sympathy. I just had a bugle.

The procession arrived. The pastor shouted Scripture’s comforts upwind to the pallbearers and mourners. We did our best to sing, a cappella: . . . In life, in death, O Lord, Abide with me. I had not known the deceased well, but we shared a birthday, and we had enjoyed greeting each other upon it each year, as a small town allows. Now the town was one birthday buddy smaller. This little loss I felt would have been silly, if the losses built into any human loss were silly.

My turn. I played taps, echo taps. It was not until “gone the lake” of the echo that I thought to myself, I am playing taps. My execution was not perfect; I counted three or four little squawks or bobbles. It wasn’t movie taps. But as a girl, I’ve compared myself to movie girls for a long time, and know that movie comparison is an invalid way to live. I’m also a housewife, not a veteran, Boy Scout, or robot. So I felt OK, and I felt relieved to feel OK.

“I’ve heard it where you have two buglers, and they play taps back and forth for the echo,” said the Legion guy as he drove me back to town.

“I think that’s the way a lot of people do echo taps,” I said. “Once [the Kid] is back in commission, I’d be happy to get together with him to try that.”

“That could be neat,” said the Legion guy.