First, a confession: with the exception, at the age of 18, of a brief flirtation with Barry Goldwater’s presidential candidacy, my politics have leaned decidedly Left.  My father, on the other hand, was a conservative Republican all his life, even voting for Donald Trump only two weeks before his death.  Needless to say, we had our arguments, loving if sometimes heated, but we always agreed on one thing: the importance of beauty in our lives.  He found it, especially, in flowers: his garden was magnificent, and he had one of the largest fuchsia collections in the world. 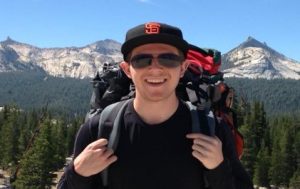 I didn’t inherit his green thumb.  My passion was wild nature, and especially Yosemite, the place he first took me backpacking at the age of 11.  I am blessed that my own son has inherited that appreciation from me and spends his free time on the high trails.  We have a favorite backpacking destination: Young Lake in Yosemite.  Dad took me there when I was 12 and I took my son there when he was the same age.  When dad died, I bought a lovely painting of the lake to remember him by; it hangs above my desk.

Backpacking taught me many lessons: you can have too little of what you need—food, water, shelter—and you will pay a price.  But often, it’s carrying too much that makes you miserable. You must learn what is essential and how to find balance.  Backpacking helped me understand what made me happy: companionship on the trail; freedom and control of my time; healthful exercise; a sense of adventure and wonder. But most important of all was the beauty everywhere around me; I carry the memories of lovely mountains, lakes, waterfalls, meadows, and wildlife with me always.

To some degree, I’ve come to think of America as a backpacker who has forgotten backpacking’s lessons.  Weighed down by our possessions and our enormous pack, we’ve fallen backwards on it, and, like an upturned turtle or beetle, cannot extricate ourselves without re-balancing our pack and reconsidering what we need.  The straps are digging in and we are angry, blaming each other instead of consumer priorities and possession-centered values that neglect the non-material and spiritual side of life.

As are many of you, I’m sure, I’m deeply troubled by how polarized America has become, how angry we are, despite our wealth and power, and, especially, by the chasm between urban and rural Americans.  Slowly, I’ve come to believe that a recommitment to beauty, both of nature and of human design, is the soft and shaded path on which we can walk together again—slowly so we actually see what wonders surround us.

In the small California town of Nevada City, I learned how the beauty of the magnificent Yuba River, threatened by proposed power dams, brought together Right and Left, “hippies” and “rednecks,” in a 16-year fight to protect it.  Love for the river and its beauty made it possible for a polarized community to engage respectfully and led to a continued effort to protect the local watershed.  Twenty years after the dams were stopped, fully 20 percent of the community still turns out every year for river cleanups.  “We’re not going to make it as a species,” says Caleb Dardick, a community leader, “if we don’t learn to come together neighbor-to-neighbor, regardless of our differences, to work on things we care about.”

One thing I think we all care about is beauty.  When I read the comment by Doug Tompkins, founder of the North Face and Esprit clothing giants, that “If anything can save the world, I’d put my money on beauty,” I was determined to test his hypothesis.

With others, I started an organization called And Beauty for All with the goal of bringing Americans together to make our communities more beautiful, with greater access to nature, with design that encourages walking and talking, and with art that elevates the spirit.  Admittedly, it’s grown slowly; everyone is so busy now, and some cannot perceive beauty as a serious topic for our civic life.  But beauty is no luxury; even the poor immigrant textile workers of early 20th Century America knew it; “Give us bread, but roses too!” they demanded, seeking time to play, and parks to play in, and flowers and art and music and dance.

Naturalist John Muir claimed that “natural beauty-hunger is made manifest in the little window-sill gardens of the poor, though perhaps only a geranium slip in a broken cup, as well as in the carefully tended rose and lily gardens of the rich, the thousands of spacious city parks and botanical gardens, and in our magnificent National parks—the Yellowstone, Yosemite, Sequoia, etc.—Nature’s sublime wonderlands, the admiration and joy of the world.”

Recent studies by Gallup and the University of South Carolina Upstate have found that access to beautiful surroundings is one of the strongest attractions any community can offer, and the factor most correlated to high levels of subjective well-being. Beauty is not simply in the eye of the beholder; if it were tourists would visit garbage dumps as well as Yosemite.

Beauty can also encourage more sustainable behaviors—when Vienna, Austria beautified its metro stations and built greenery-sided footpaths between them so citizens didn’t have to walk along car-filled streets, transit ridership doubled, car-use dropped dramatically, crime fell, cortisol tests of pedestrians revealed less stress, people reported greater happiness, and commuters were willing to walk three times as far before getting into their cars.  “Beauty is like a battery,” Vienna transportation engineer Hermann Knoflacher told me. “It energizes, while an ugly city, all concrete towers and asphalt, enervates.”

As I’ve pursued beauty, I’ve become even more convinced that it can help unite us as Americans. Googling “can beauty save the world?” I discovered that much of the best writing about beauty’s power can be found in conservative publications like this one.  I was moved by articles about the subject from The American Conservative’s Gracy Olmsted, and from Front Porch Republic editor Jeff Bilbro’s lecture at a “Beauty Will Save the World” conference I’d never heard of, focused on Dostoevsky’s claim about beauty and its repetition in Solzhenitsyn’s 1970 Nobel lecture.  I learned that each of the past three Popes have remarked on beauty’s power to save a world trapped in a de-sacralized consumerism for which nature is just a utilitarian resource for stuff.  I learned that on the Left, Dorothy Day also claimed that “the world will be saved by beauty.”

There is much more I could say, many more concrete examples to explore.  But I write now to encourage a dialogue across our great political divides.  Knowing that Americans, regardless of political belief, share a love for “spacious skies, for amber waves of grain, for purple mountains majesties above the fruited plain,” I am hopeful that we can come together to shape new values of stewardship, respect for nature, frugality, kindness, and a sense of deep responsibility for our communities.  As the poet Gary Snyder has written, “Stay together / Learn the flowers / Go light.”  Community, beauty, simplicity.  I hope Americans of all political persuasions will join together in this effort.

The header painting is Young Lake by Rebecca Holland