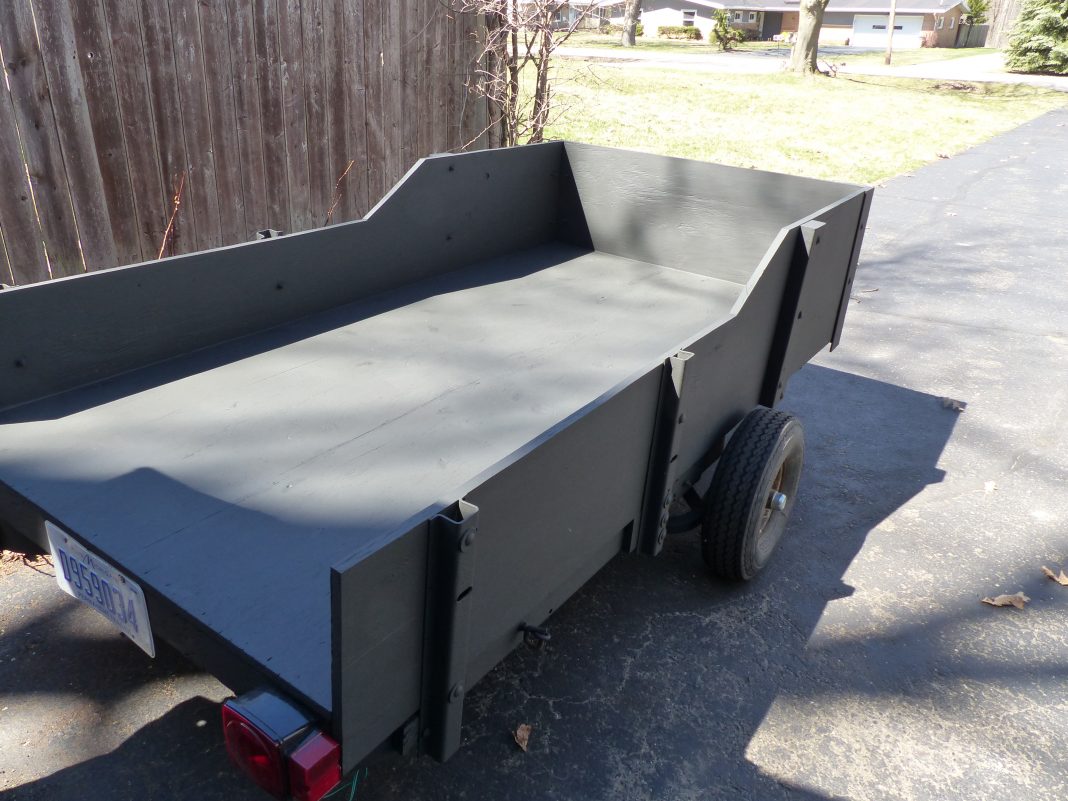 I do not know much about gods; but I think that the river
Is a strong brown god— . . .
Unhonoured, unpropitiated
By worshippers of the machine, but waiting, watching and waiting.
—T.S. Eliot, Dry Salvages

“Salvage” comes from the Latin word for “save” and has come to mean the act of recovering or repurposing any form of waste, but originally, it had a more specific meaning: the act of rescuing a wrecked ship or its cargo, or the payment due to someone who rescues a ship.

This spring, I’ve had occasion to reflect on the valencies of this word as I tore off the rotten and rusted parts of a very used trailer I purchased last fall. Some readers may remember that I built a wooden rowboat this past summer only to discover that it was too unwieldy to transport it on top of our car. Since I had already spent more money than I’d anticipated on boat materials, I bought the cheapest utility trailer I could find on Craigslist and installed a hitch on our car. (The latter project involved lying on my back with my nose inches from the underside of the car and drilling up through the frame while shards of red-hot metal rained down. A decidedly unpleasant experience.) Ironically, the trailer was actually an old boat trailer that someone had converted into a utility trailer, but I planned to use it to haul both my boat and other stuff: firewood, yard waste, lumber, etc. The trailer had already started to come apart by the time I got it home, but I patched it up and used it successfully through the fall.

This spring, however, I knew it would need some substantial work if it was to be salvaged. While my trailer wasn’t literally rescued from a flood, its function as a boat trailer and the fact that water caused its decay—rusting the metal and rotting the wood—at least puts my work of restoration near the original sense of salvage. A few weeks ago, I made a final trip with the bubble-gum-and-bailing-wire version of my trailer to haul the lumber I’d need to rebuild its decayed bed. After using my reciprocating saw to cut through rusted bolts and nails and my crowbar to pull off the rotten boards, I replaced the compromised supports, cut out and bolted on the sides, and screwed down a new sheet of plywood for the bed. I then painted the whole thing. If you don’t look too close, you might not notice it’s an old boat trailer with some amateur welds and a bolted-on bed.

In our age of progress and development, we tend to worship the new and discard the old. Technological gadgets quickly become obsolete and worthless, so we jettison them in order to buy the latest model. The “move fast and break things” approach of Mark Zuckerberg doesn’t leave much room for fixing things. In such a throw-away culture, simple acts of restoration—of salvaging—can bear witness to a different view of time and creation.

T.S. Eliot’s The Dry Salvages is the third poem in his Four Quartets, and in it, Eliot imagines a redemptive way of inhabiting creation. The title of the poem refers to a group of rocks off the coast of Massachusetts. Many ships have been wrecked on these rocks, leaving cargo and lumber for locals to salvage, and this landmark reminds us of the destructive effects that time and storms will have on all our endeavors. “Worshippers of the machine” may prefer to believe that they can engineer their way out of this reality, but such fond beliefs doom them to endure “Years of living among the breakage / Of what was believed in as the most reliable.”

“Time the destroyer is time the preserver. …
And the way up is the way down, the way forward is the way back.”

While time does destroy, Eliot’s line reminds us that according to the Christian account, entropy is not an inevitable function of time. When we throw away things that no longer serve their purpose, however, we acquiesce to a view of time as simply destructive and fail to experience its preservative or even redemptive dimensions.

In a very basic sense, what time preserves can become the foundation for new growth. In the case of my trailer, the metal frame and the wooden supports that had been kept dry formed the bones for my rebuilt trailer. Most of the visible parts of the trailer have been replaced, but all the important parts—the frame, the axle, the wheels—are original or are remnants of earlier salvage jobs.

It would have been much simpler—albeit more expensive—to drive down to a big-box store and purchase a new trailer. But this trailer wouldn’t come with the history that is preserved in the patina of welds and rust on my salvaged trailer. The bright finish of a new trailer would shine with a sterile perfection rather than preserve the dings and scratches that narrate a history of many hands and loads.

And purchasing a new trailer would have indirectly contributed to another hunk of metal being added to our landfill. When we throw away things that have grown dingy or run down, we assent to decay and death as final rather than recognizing them as necessary parts of redemption. As Jesus told his disciples, “unless a grain of wheat fall into the ground and die, it abideth alone; but if it die, it bringeth forth much fruit.” And in her own irreverent way, Yeats’s Crazy Jane attests to the same truth when she declares, “nothing can be sole or whole / That has not been rent.” Even the simple act of salvaging an old boat trailer can participate in this pattern by which all creation is rescued from the storms of time, is made whole from what has been rent.

“We are only undefeated
Because we have gone on trying.”

Salvaging remnants that have survived the seas of time is one of the ways in which we can fight what Tolkien’s Galadriel called “the long defeat.” When we discard the old and purchase something new, we acquiesce to death’s power. Sometimes things—and, of course, bodies—are so damaged that they are beyond the power of humans to repair. But for Eliot, the Virgin Mary’s “Behold the handmaid of the Lord, be it unto me according to thy word” is the human response that participates in the work of salvaging creation:

There is no end of it, the voiceless wailing,
No end to the withering of withered flowers,
To the movement of pain that is painless and motionless,
To the drift of the sea and the drifting wreckage,
The bone’s prayer to Death its God. Only the hardly, barely prayable
Prayer of the one Annunciation.

Yesterday, on Easter Sunday, Christians celebrated the answer to Mary’s barely prayable prayer. Yet her prayer also required her to watch as her son died a slow, painful death. Eliot’s Christian hope is by no means sentimental or cheap; it is a difficult, gritty hope, a hope that entails suffering and the work of salvaging that which will eventually be lost beyond the human power to repair.

One of the most profound visions of this hope comes near the end of Wendell Berry’s novel Jayber Crow. Jayber relates a parable about a man who goes hunting in the woods and falls through the rotted cover of an old well shaft. Will he be able to climb out? Will a random passerby hear his calls and help him? The only answer Jayber gives to these questions is his faith that nothing is finally lost, not even the man on the cross who feels himself abandoned by his Father:

Listen. There is a light that includes our darkness, a day that shines down even on the clouds. A man of faith believes that the Man in the Well is not lost. He does not believe this easily or without pain, but he believes it. His belief is a kind of knowledge beyond any way of knowing. He believes that the child in the womb is not lost, nor is the man whose work has come to nothing, nor is the old woman forsaken in a nursing home in California. He believes that those who make their bed in Hell are not lost, or those who dwell in the uttermost parts of the sea, or the lame man at Bethesda Pool, or Lazarus in the grave, or those who pray, “Eli, Eli, lama sabachthani.”

The Word who created and who became incarnate in order to redeem creation is the great salvager. What, after all, is Noah’s flood but a wrecking of a broken world under the waters, and then a millennia-long, ongoing salvage operation? And what is baptism but a wrecking of a broken person under the waters, followed by the life-long work of salvaging? In both these cases, boats–Noah’s ark and the Church–serve as rescue vessels. While my humble rowboat doesn’t have such a cosmic purpose, the hours it allows us to spend on the water can ameliorate the hectic busyness of a sin-ravaged world, and viewed in this light, it’s fitting to transport it on a salvaged trailer.

As Eliot notes at the beginning of his poem, “Salvages is pronounced to rhyme with assuages.” Our human efforts to salvage what is broken always remain partial, they remain the fighting of a long defeat. We assuage; we do not cure. And yet when we mend what is broken, we “apprehend / The point of intersection of the timeless / With time.” Such, anyway, was my hope as I cinched new nuts over their lock washers and brushed a coat of paint onto my trailer.

The Place of Religion and Literature