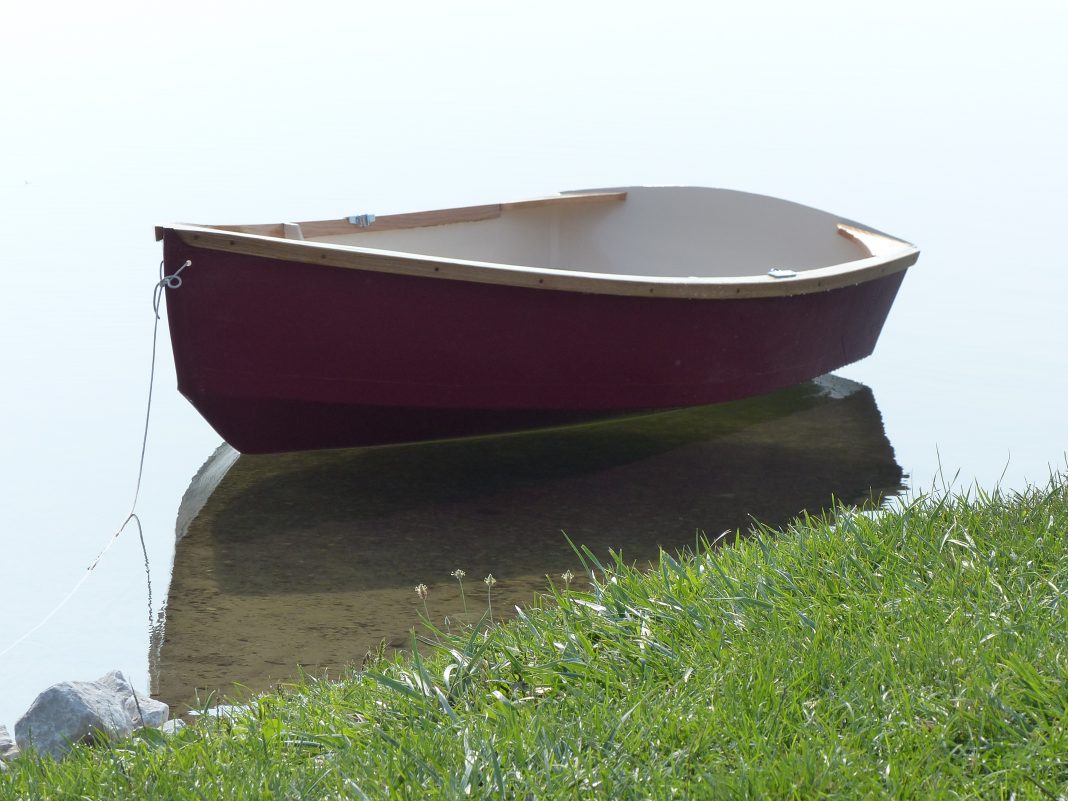 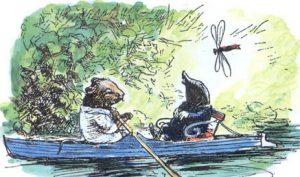 In the nautical classic The Wind in the Willows, Ratty tells his new acquaintance Mole, “‘Believe me, my young friend, there is NOTHING—absolutely nothing—half so much worth doing as simply messing about in boats.” While messing about in boats may very well be worth doing, Ratty should also have informed Mole, in the interest of full disclosure, that it will severely deplete one’s net worth. My recent experience building a wooden rowboat attests to this reality.

My initial back-of-the-envelope calculations led me to believe the materials for my boat would cost only a few hundred dollars. Those calculations were wrong. I don’t know what the final cost was because, unlike Thoreau, I deliberately did not keep a full account of my expenses, but I think I spent at least double my initial projections. (Maybe I could get a job as a government contractor.) Robert Traver—Michigan Supreme Court Justice turned fly-fisherman—figures each ounce of trout he caught cost him five dollars. My poor bookkeeping prevents any precise calculations, but for the first few decades of catching panfish my cost-per-ounce will make caviar seem cheap.

However, if I factor in the pleasure I took in building the boat, as my friend Ethan Mannon reminds me I should, then maybe I still came out ahead. And that, after all, is the kind of broad accounting that Ratty relied on in making his assertion to Mole. For Ratty, messing about in boats is an intrinsic good: “‘Whether you arrive at your destination or whether you reach somewhere else’” is of no concern to him; he simply delights in the joys of boating itself.

I came to see my boatbuilding endeavor as akin to Ratty’s mode of messing about in boats. Instead of building a boat myself because it would be cheaper than buying one (far from it!), I came to see boatbuilding as an intrinsic good: I could apprentice myself to a craft, participate in the creation of a graceful boat, and gain the opportunity to see our part of the world from the vantage point of its waterways. Furthermore, the designer of the boat I built says that one of the joys of boatbuilding “is that you’re literally breathing life into a pile of lumber and making this beautiful creation that really does have a life and lives on the water.” If he’s right—and my limited experience confirms his claim—building a wooden boat may be one small way of, as Wendell Berry puts it, “practicing resurrection.” Even if that’s overstating the case, building this boat turned out to be an enjoyable—if costly—summer project.

Part of the pleasure of building this particular boat came from my own somewhat fraught history with the design. About twenty years ago, my dad agreed to build a rowboat with my younger brother. They went to several boat supply stores, researched different boat designs, bought a set of plans, and began gathering the necessary materials. The project was going well, and they had the pieces cut out, the boat stitched up, and the seams epoxied. They took the metal stitches out one evening so they could apply the fiberglass tape and finish epoxying the seams, but when they returned to the garage the next morning to go to work, the boat had exploded and lay shattered on the floor. The blueprints went back into a manilla envelope, and my dad bought a Livingston. But if I managed to build this boat now, maybe I could redeem this past failure.

The boat my dad chose was a 7’ 6” Polliwog. Designed by Washington State boatbuilder Sam Devlin, the Polliwog is supposed to be easy to build because it doesn’t require any building molds. Instead, you cut out plywood panels, stitch them together with bailing wire, and then unfold them into the final shape. Epoxy the seams, take out the stitches, install a couple of bulkheads and seats, attach the trim, and voila!—you have a boat. Crucially, for neophytes like myself, there’s even a detailed video online where Sam walks through the building process.

Of course, projects are never as simple as they first appear. Yet another one of my rewards came from confronting and solving the series of practical problems with which this boat confronted me. I spend too much of my time wrestling with abstract ideas, so I enjoyed the opportunity to address concrete ones: How do I transfer the curve of the bow to this board so I can cut out the seat? How do I trace a symmetrical curve on the stern knees that will look right? While these problems are perplexing and require some creativity to solve (at least for me), they are not as intractable as many of the problems I try to address in my intellectual work. 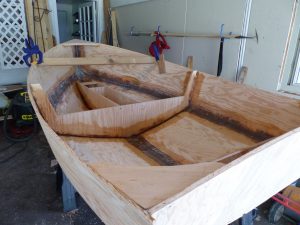 As I solved a succession of concrete problems, the boat gradually came to life on my sawhorses. One of the delights of boatbuilding was seeing how working within the constraints of my wood and other materials led to a graceful, beautiful boat. Matthew Crawford articulates the rather paradoxical reality that grace and creativity are made possible only by “submission to things that have their own intractable ways, whether the thing be a musical instrument, a garden, or the building of a bridge.” One of the things that made building this boat worthwhile was seeing this beautiful vessel arise as I learned to stretch the wood to its limits—but not beyond.

Like Thoreau, who began building his house with a borrowed axe, I can’t pretend to have built this boat myself. In the first place, as already explained, I began with borrowed blueprints, so I didn’t even choose which boat I would build. My friend Jack loaned me his sander and spent a morning helping me stitch the ungainly pieces together. Another friend helped me use his planer to get the trim pieces cut to the right dimensions. Most helpful of all was my three-year-old daughter who “epoxied” the boat many times with a dry paintbrush.

And let’s not forget YouTube, the friend of all who try to recover skilled trades in an age when they are dying out. My daughter watched “Mr. Sam” explain to us how to build the boat so many times that she began referring to him regularly in conversation. However, when the time came to bend my inwales around the curve of the hull, I realized that although our trusty guide Mr. Sam talked about this process as a simple matter, my oak lumber was not going to make that bend. So back I went to YouTube for an education in how to build a steam box and bend wood. With a cheap drainage pipe and a bricolage of other supplies (plus lots of duct tape, which says it can’t be used over 200 degrees Fahrenheit, but which sort of continues to work at 212), I duly constructed a steam “box” to heat my oak. That, plus a lot of elbow grease and clamps, did the trick.

As I readied the boat for its maiden voyage, I soon realized I wouldn’t be winning any beauty contests with my boat. Some boat painters talk about a “10-foot rule,” meaning that you shouldn’t worry if there are minor defects in the surface as long as your painted boat looks good from 10 feet away. Let’s just say my boat ended up falling under the 50-foot rule. But that merely reaffirms that I’m an amateur boatbuilder, one who is happy to be messing about in boats. 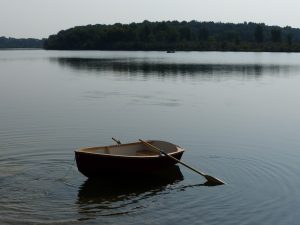 When we finally launched the boat, it sat gracefully in the water, more than fulfilling the vision inspired by the set of blueprints. Unfortunately it proved more difficult to get the boat on and off the top of our car than I anticipated—it’s fairly light, but also quite ungainly for one person to manage. So I’m now in the market for a used utility trailer that can double as a boat trailer. In other words, this boat promises to continue consuming money for the foreseeable future. Messing about in boats is apparently an ongoing, never-completed endeavor. But if Ratty’s right that this activity has its own internal rewards, then maybe it’s still worthwhile. I just hope I can afford it.

Your Brains are in Your Hands: Doug Stowe on Forming Mind,...