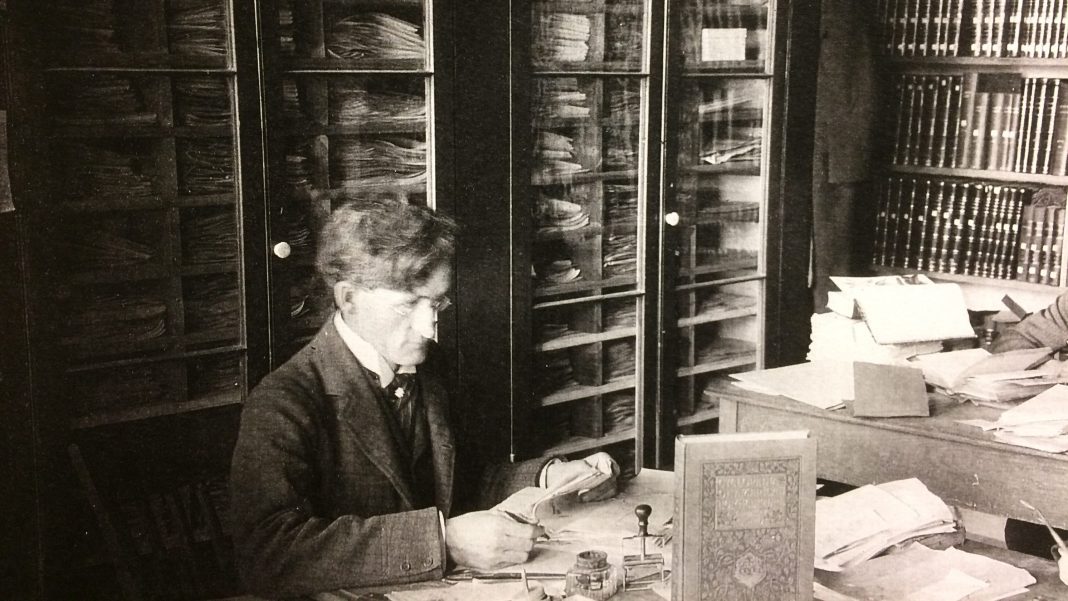 This past summer I found myself at the confluence of two tasks needing doing on the home farm: one agricultural and the other bibliographic, the two, as agrarian Liberty Hyde Bailey knew best, not so very different in the end. The first was how to stave off the invasion of wild burdock and dandelion that found me, Hamlet-like, posing the to-weed-or-not-to-weed question. Should I strike out against the burdock and, by opposing end it, or simply suffer the slings and arrows of its outrageous existence? That yeoman’s drama mixed and mingled with the reading of John Stempien’s and John Linstrom’s consistently delightful and beautifully produced compendium The Liberty Hyde Bailey Gardener’s Companion: Essential Writings (Cornell University Press, 2019). Faced with a farmyard of impressively elephantine burdock volunteering in every corner, my mind turned naturally to Bailey, who once wrote of this otherwise verboten species, “If a person wants to show his skill, he may choose the balky plant: but if he wants fun and comfort … he had better choose the willing one” (17).

Nothing could be more willing than wild burdock.

A long-time professor of experimental horticulture at Cornell University, Bailey championed the virtues of the much maligned burdock and the pesky dandelion throughout a capacious oeuvre the editors number at more than sixty-five books and more than a thousand articles. Throughout, he champions the cause of weeds and other wayfaring and unwanted botanical strangers, so much so that his sympathies, farmers of his era felt, must surely have lain with the devil. Except that like John Muir, John Burroughs, and Henry David Thoreau before him, Bailey didn’t see weeds as emblems of devilry, but as simple and unavoidable facts whose purpose and meaning the horticulturalist should work to divine. Bailey’s garden writing sparkles with fondness for, and folksy familiarity with, the species about which he writes. His is a virtuoso knowledge, easy in manner and fluent in style, scattering quotable phrases like so many rose buds. Writing must have come easily to Bailey, who moves about his prose with the carefree confidence of a cat running the garden wall for the sheer pleasure of doing the thing for which it was born.

A sentimentalist at root, Bailey waxes nostalgic about boyhood days spent on the farm in Michigan, as when he opines of the dandelions of his long-ago: “We hated them because we had made up our minds not to have them, not because they were unlovable…. Then if we must have then, we decided to love them. Where once were weeds are now golden coins scattered in the sun, and bees reveling in color, and we are happy!” (171) It’s his child-like exuberance, tempered with his scholar’s circumspection, that promises to endear Bailey to the twenty-first century garden enthusiasts, who are likely to hear in his enthusiasm a foreshadowing of our own botanical fever.

Coeditors Stempien (a history teacher in Lowell, Michigan) and Linstrom (most recently a doctoral candidate in English living in New York City) have done an admirable job of handpicking from among Bailey’s prodigious oeuvre the essays most likely to resonate with contemporary readers. In several of the most prescient selections Bailey appears to predict the preternatural growth in what has become a $50 billion industry in twenty-first century America, where nearly eighty percent of households engage in some form of indoor or outdoor “gardening” according to the National Gardening Survey. The same survey claims that the per-household spending on the hobby now reaches an all-time high at more than $500 annually. Increasingly, Americans are spending their lawn-and-garden money on knowledge—not the how-to books, comprehensive cyclopedias, and exhaustive encyclopedias that Bailey wrote and edited by the dozens, but gardening apps and paid content from a profusion of cultivation-centered websites.

All this Bailey would surely have celebrated with his inclusive, everyone-is-a-gardener zeal. He sympathizes in particular with amateurs, novices, and all those discovering the allures of up-close nature. In “Reverie of Gardens” the Cornell University professor turns to second-person exhortations: “Have you made a garden all by yourself? Then try it, if you have not. Do not delegate the work. Yourself thrust the spade deep into the tender earth” (27). Elsewhere in the same essay he observes: “Sooner or later, every person feels this desire to plant something. It is the return to Eden, the return to ourselves after the long estrangement of our artificial lives.” (26). The author sounds a similar note in “The Common Natural History,” offering solace to the city-dweller: “If the range of nature is not his, he still has the wind and the rain, the street trees, the grass of the lawns, the weed in its crevice, the town-loving birds, the insects, and I hope that he has his garden.” (21)

Passages like these demonstrate Bailey’s uncanny ability to alter his pitch from plant scientist to Johnny Appleseed-styled proselytizer, and back again as the rhetorical occasion demands. At times it seems as if the man sometimes called the Father of American Horticulture is needlessly shy to display his own encyclopedic knowledge before the general public, for often, as in the aforementioned passage, he exemplifies by broad type (i.e. “town-loving birds”) rather than by specific genus or species as a scientist might. His choice helps make the reader feel the writer’s equal, though perhaps no better prepared for hard work in the lawn, for after reading Bailey’s whimsical essays and poetic pensées, the reader is as likely to reach for an iced tea, a lawn chair, and a good book as they are to reach for the trowel. Thankfully, the child in Bailey courts and celebrates trial and error, calculating in advance that the greatest obstacle to gardening is its overcomplication, an issue he takes up explicitly in his piece “The Integument Man,” an essay one wishes might have been included in this otherwise well-selected collection.

Stempien and Linstrom are to be commended for their yeoman’s work in assembling this accessible and enjoyable sampler, though it is not a perfect collection. A handful of the Bailey excerpts seems short to the point of being slight or insubstantial (for example “The Growing of Plants by Children” or “From Lessons of To-day,” both of which fall short of three pages.) The book largely eschews contextual endnotes that might have deepened the reader’s knowledge of Bailey’s decades at the nexus of the agrarian, conservation, and back-to-the-land movements. The table of contents does not include sources for each of the anthologized essays, so readers are left to find this information in a Bailey-only bibliography all too easily missed at the back.

The volume’s frontmatter—a lengthy preface by Linstrom, an introduction by Stempien, and an “explanation of sections” presumably cowritten by both editors—may try the reader’s patience with its lengthy preamble, though in sum the frontmatter is both informative and useful if one can see beyond its segmentation and the difficulty inherent in reconciling the disparate editorial voices. The editors, separated by a generation, bring unique strengths to the project—Linstrom, an emerging literary scholar and creative writer, offers a poetic ear and Stempien, a public historian with a deep well of historical knowledge, brings his teacher’s desire to share. Together they exercise a deft touch, their task here more pitch-perfect assembly than critical or comprehensive curation. Readers will surely appreciate some of the niceties one expects from the high-production value of Cornell University Press books, such as the brief excerpts from Bailey’s garden poems that precede each section after the fashion of an epigraph. And Bailey’s trademark verbosity is further leavened with occasional black-and-white botanical illustrations from the period.

The backmatter of The Liberty Hyde Bailey Gardener’s Companion is similarly crowded, making the volume’s bookends needlessly encumbered. The backmatter includes an epilogue consisting of two essays (“Marvels at Our Feet” and the single-page “Society of the Holy Earth”) that might have been better included in the book proper, two appendices (one, “The Garden Fence,” is far too long to be run so late in the book) in addition to the usual notes, bibliography, and index. Precisely because Bailey’s work was so frenetic in its exuberant eclecticism, the editors might have better served as occasional curbs or counterweights to the author’s tendencies, presenting us a more streamlined front and backmatter that offer sufficiency without overabundance.

Both Linstrom and Stempien, the former a one-time associate curator at the Bailey Museum and Bailey impersonator, and the latter the director of the museum from 2006 to 2012, serve as Bailey boosters and champions in this worthwhile collection, making no claims to neutrality or scholarly objectivity. Having myself published a collection of Bailey’s most influential agrarian and environmental writing more than a decade ago with the same top-drawer university press, I share the editors’ desire to cultivate and steward the legacy of this fine, forgotten agrarian, a forerunner of Aldo Leopold and Wendell Berry and a harbinger of the environmental movement. While this collection is less than perfect, I have no doubt it would delight Bailey, dandelions and all. Selecting and anthologizing the work of a writer-scholar as prolific as this is a labor of love as much as caretaking, stewarding, gardening, weeding, and pruning. Stempien and Linstrom are to be commended for minding their garden well.

In Defense of Okra